On November 21, President Hassan Rouhani declared the end of the so-called Islamic State, also known as ISIS or ISIL. “Today with God’s guidance and the resistance of people in the region we can say that this evil has either been lifted from the head of the people or has been reduced,” he said in a televised address. “Of course, the fallout from [the crimes of] this group and those who have spread out in villages will continue to be there, but their base and root have been destroyed, and it was a big feat,” he said at the Fifth National Congress of the House of Farmers in Tehran. 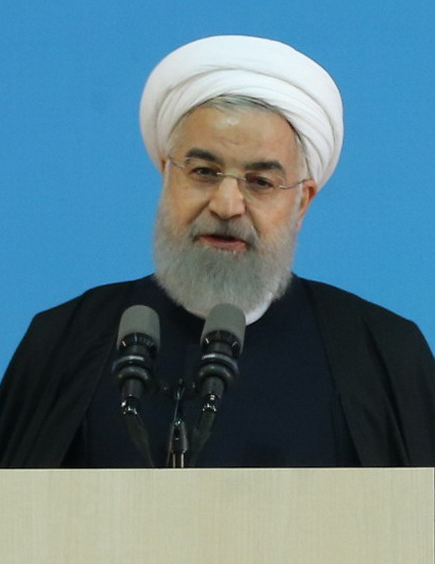 Rouhani’s remarks came days after ISIS lost its last strongholds in Syria and Iraq. Syrian troops and loyalist militiamen reportedly took Abu Kamal, a small town on the Euphrates River and the Syria-Iraq border. And Iraqi and U.S.-led coalition forces took the northwestern Iraq town of Rawa. The group’s caliphate began to crumble after Mosul, Iraq’s second largest city, fell in July. In October, the group lost its nominal capital, Raqqa, a city in northern Syria.

In his address, Rouhani accused Western countries, including the United States, and Israel for supporting the extremists. He criticized the Arab League for inaction on ISIS and the conflict in Yemen. “When the Iraqi people were under the attack of the ISIS and the Syrian people were fighting ISIS in Aleppo and Deir ez-Zor and the Yemeni people were under the bombing of the Saudis and the Lebanese were struggling with the terrorists, where was the Arab League?” he asked rhetorically. Rouhani also highlighted Iran’s role in supporting the Iraqi and Syrian armies in battles against ISIS.

Rouhani especially thanked the commander of the Revolutionary Guards’ elite Qods Force, Qassem Soleimani for coordinating a campaign against ISIS. In recent years, Soleimani has played an increasingly public role and often traveled to the front lines. He has been photographed extensively leading Shiite militias in Iraq and Syria.

Major General #QasemSoleimani, the commander of Qods Force of #Iran's Islamic Revolution Guards Corps (IRGC), in a surprise visit to #Syria's #AbuKamal. The #SyrianArmy and its allies are preparing to launch a major assault against #Daesh #terrorists in Abu Kamal soon. pic.twitter.com/sZiVkpPLSM

Soleimani penned a letter to Supreme Leader Khamenei announcing the end of the ISIS caliphate. In it, he blamed the United States and Israel for the group’s formation and crimes. Khamenei addressed members of Iran’s Basij militia on the same topic the following day. "In the region, the Islamic Republic and you, young individuals, managed to bring the U.S. to its knees and defeat it,” he said. The following are excerpted remarks by Rouhani with the full text of Soleimani’s letter and Khamenei’s remarks.

"I thank all warriors of Islam, our diplomats, the government and the nation, as well as the Supreme Leader of the Islamic Revolution, armed forces and the Iraqi and Syrian nation for their efforts to put an end to a group that did not bring anything for us but evil, misery, destruction, murder and savagery.”

"ISIS is a terrorist group that was fed and armed by major world powers and some reactionary countries of the region, outperforming historic criminals by their crimes.”

"The bulk of the work was done by the people and armies of Syria, Iraq and Lebanon and we helped them out of our religious and Islamic duty.”

"What they plundered from Iraqi and Syrian museums were sold by the same world powers in the markets.”

"We never imagined that in the 21st century, criminals backed by western countries, Americans and the Zionist Regime would commit such crimes.”

“Today, with the help of God and the attempts of the peoples of the region, we can say that this evil has either been removed or reduced. Of course, the remaining ones will continue working, but their foundations have been dismantled.”

“Tomorrow, the presidents of Iran, Turkey and Russia will meet in a tripartite summit to discuss the future of Syria and the region.”

“The bulk of the work was done by the people and armies of Syria and Iraq with the help of countries of the region, especially the Islamic Republic of Iran but it is regretful that in this situation, the foreign ministers of an old, worn, exhausted and ineffective organisation named Arab League gather together and speak about why the Yemeni people have been able to respond after enduring two years of aggression, denouncing the Yemeni people's missile attack on Riyadh.”

"It is disappointing that some people who call themselves Muslims and Arabs are expressing disappointment that an innocent nation has been able to respond to the hostile acts against its people, saying why the Yemeni people and army were able to do this with a missile they owned.”

"The actions were a signal proving that we should stand on our own feet in today's world and that our national, military, economic and food security should be made by ourselves.”

—Nov. 21, 2017, at the Fifth National Congress of the House of Farmers in Tehran

In the Name of God, the Most Beneficent, the Most Merciful

To the dear and brave Leader of the Islamic Revolution, Ayatollah Khamenei:

Salamun Alaikum (peace and greetings upon you),

Six years ago, a dangerous plot like the ones at the time of Amir al-Mu'minin (as), which prevented Muslims from truly understanding the pure Islam of Muhammad (pbuh), this time, mixed with the poison of Zionism and arrogance, covered the Islamic world like a devastating storm.

This devastating and poisonous sedition was created by the enemies of Islam with an aim of initiating widespread war within the Islamic world and a fight among Muslims. The evil movement, under the name of the "Islamic State of Iraq and the Levant," managed, in the early months, to deceive tens of thousands of Muslim youth from both countries, causing a very dangerous crisis for the influential and crucial countries of the Islamic world: Iraq and Syria.

They occupied hundreds of thousands of square kilometers of land from these countries along with thousands of villages, towns, and provincial centers; they destroyed thousands of factories, manufactures, and major infrastructure of these countries--including roads, bridges, refineries, wells, gas and oil lines, and power plants; they destroyed or burned important cities with valuable historical monuments and national civilizations by bombing them.
Although it is not possible to calculate all the damage caused yet, the preliminary investigation estimates damages to be around $500 billion.

In this event, there were extremely horrendous crimes that could not be shown, which included the following: decapitation of children, skinning men alive before their families, taking young girls and women hostage and raping them, burning people alive and group massacres of hundreds of young people.
The people of these countries, astounded by this poisonous storm, either became victims of the takfiri criminals or left their homes, displaced throughout other cities and countries.

In this dark sedition, thousands of mosques and sacred centers of Muslims were destroyed or ruined, and sometimes a mosque along with the Imam and all the people in it were blown up.

More than 6,000 young people, deceived in the name of defending Islam, blew themselves up by way of suicide bombings, using explosive vehicles at city squares, mosques, schools, even hospitals and public places of Muslims; as a result of these criminal acts, tens of thousands of innocent men, women, and children were martyred.

All these crimes have been designed and implemented by US leaders and organizations, according to the acknowledgement of the highest-ranking US official who is currently president of the United States; moreover, this scheme is still being modified and implemented by current American leaders.
What, in addition to the favour of God and the special grace of the great Prophet Muhammad and his honorable household (pbut), led to the defeat of this dark and dangerous conspiracy was the wise leadership and guidance of his Excellency, Ayatollah Sistani, who mobilized all facilities to deal with this toxic storm.

Certainly, the resistance of the Iraqi and Syrian governments and the perseverance of the armies and youths of these two countries, especially the holy Popular Mobilization Forces (PMF), Al-Hashd Al-Sha'abi, and other Muslim youth from other countries with the prominent presence of Hezbollah led by its great leader, Sayyid Hassan Nasrallah, played an important role in overturning this dangerous event.

Definitely the valuable role of the nation and the government of the Islamic Republic of Iran--the respected president in particular--the parliament, the Defense Ministry, as well as police, military and security organizations of our country, in supporting the above mentioned states and nations, is admirable.

This humble person, as a soldier called upon by your eminence to serve on this battlefield, announces the termination of the rule of this vicious cursed entity, following the completion of the liberation operation of Abu Kamal as ISIS' last fort, bringing down the flag of this US-Zionist made terrorist group, raising the flag of Syria. On behalf of all the commanders and anonymous fighters on the battlefield, the thousands of Iranian, Iraqi, Syrian, Lebanese, Afghan and Pakistani martyred and disabled defenders of the holy shrine--who gave their lives to defend the lives and honor of Muslims and their sanctities--I congratulate and felicitate you and the noble nation of Islamic Iran, as well as the nations of Iraq, Syria, and other Muslims of the world. I prostrate before the Almighty God in gratitude for this great victory.

Your son and soldier

“In the region, the Islamic Republic and you, young individuals, managed to bring the US to its knees and defeat it. All their efforts and plots were aimed at removing the ideologies of the Islamic Revolution or resistance from the region, but the exact opposite occurred.”

“The operation in Syria and Iraq--disposing of the cancerous tumor, created by the enemies to counter the resistance--was successful thanks to devout young men.”

“One of the enemy's known strategies is to disappoint our youth. Unfortunately, some act like mouthpieces for the enemy, spreading hopelessness, saying it's not possible to resist such enemies. And, why not? The Islamic Republic has stood up against the enemies' avarice and has defeated the enemy in all cases.”

“You have witnessed that these consecutive conspiracies, which were created in this region by the US, Zionists, Arab reactionaries and others, were destroyed by the sovereignty of the Islamic Revolution. One of the conspiracies was the inhumane Takfiri group: ISIS--which was destroyed, thanks to the efforts of faithful men, with the help of those who supported the resistance force."