On May 20, President Hassan Rouhani thanked Iranians for reelecting him in a live television address. “The message of our people was expressed clearly in the election and today, the world knows well that the Iranian nation has chosen the path of interaction with the world, away from violence and extremism,” he said. The president thanked prominent individuals who endorsed him, including former President Mohammad Khatami. Rouhani seemed to defy the judiciary’s media ban on mentioning the former reformist president. In a conciliatory tone, Rouhani said that he needs the help of all of Iranians, even those who have opposed him and his policies. The following is a translation of Rouhani’s remarks from his official website. 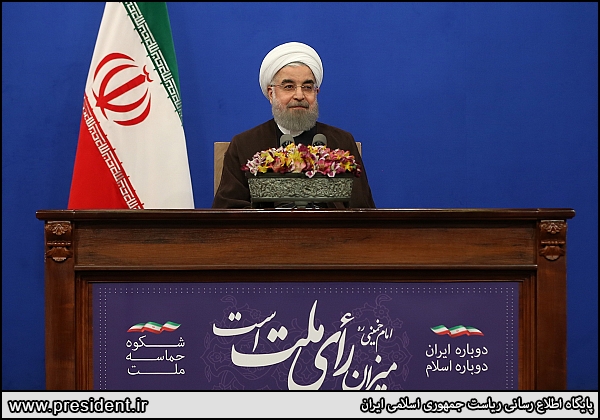 In the Name of Allah, the Most Beneficent and the Most Merciful

Hello and peace be upon the great Iranian nation who massively, significantly and effectively in the election in a big step on the path of promotion of the national interests and our dear Iran's pride.

More than 41 million votes were cast by you, bringing out Iran's history from cessation and doubt and putting Iran on the track of continuing the path of its development and growth.

You said “no” to all of those who were pushing us in the path of returning to the past or stopping in the current conditions, pushing the time forward. Your historic presence at the polls, regardless of who you voted for in the most competitive election throughout Iran's history, surprised the whole world and you trusting me again made me feel a heavy burden on my shoulders and I hope that I can be a good representative for your wants and wishes.

You proved that you are an integrated nation whom, despite political polarizations, nobody can drag to fruitless disputes among classes, ethnic groups, sects, tribes, cities or villages.

Your integrated voting in all regions throughout the country proved that you are a united nation and have one administration and want one president, who is everybody's president and, of course, the whole Iranian nation's servant.

I send my greetings to all young people, girls, boys, men and women in cities and villages, to all Iranian ethnicities.

Peace be upon our brave teachers who raged against the black storm of defamation.
Peace be upon our students, artists, press, entrepreneurs, farmers, industrialists, workers and employees who created a great, unparalleled move, welcoming the 12th administration.

Hello and peace be upon the sophisticated Leader of the Islamic Revolution who wisely and compassionately drove the turbulent waves of the elections to the shore of peace, and finally, to the box of dignity, independence and sovereignty of the nation.

I, as a little child of this nation and the seminary and university, offer my appreciation to the Supreme Leader, the great Marji, scholars in seminaries, those working in culture and arts, lawyers, athletes and the whole nation.

I deem it necessary to commemorate the man of moderation and construction, the late Ayatollah Hashemi Rafsanjani, whose place is really empty in this morning of victory. I would also like to appreciate my dear brother, Seyyed Mohammad Khatami, the family of the late Imam and his grandson Seyyed Hassan Khomeini, Aliakbar Nateq Noori, my brother [Vice President] Eshaq Jahangiri, and all dear families of martyrs, especially martyr [Ayatollah Morteza] Motahari, martyr [Ayatollah Mohammad] Beheshti, all political activists, all representatives of the Islamic Consultative Assembly, especially the esteemed Speaker of the Majlis, all factions and headquarters, and especially those who were active in the social media who spread the significant waves deep in the society.

I kiss the hands of all those who voted for the servant of people, letting him to carry out his mission, asking the Almighty God to grant me the competence to sincerely serve and gain the trust and support of all those who even did not vote for me and be the guardian of the whole Iranian nation's rights, dignity and pride.

Great people of Iran; elections are the opportunity to make decisions, and a democratic way for peacefully resolving political, social, and cultural disagreements based on people's votes, not a beginning for their expansion, continuation and deepening. In this election, our people chose the path of their future with understanding different views, and everybody must respect people's wishes and decisions.

Today the election has finished and I am the president of the whole Iranian nation and need help from each and every people of Iran and even those who have been opposed to me and my policies. I sincerely stretch my hand of friendship to all Iranian people, all factions, parties and various sectors of society.
Based on democracy and the rule of law, I respect my opposition and realize their right to criticize the administration; this means religious democracy and merciful Islam.

Today, Iran is prouder than any other time, ready to develop its relations with the world based on mutual respect and its national interests. The message of our people was expressed clearly in the election and today, the world knows well that the Iranian nation has chosen the path of interaction with the world, away from violence and extremism.

Our nation wants to live in peace and friendship with the world but, in the meantime, does not want to accept any humiliation or threat. This is the most important message that our nation expects to be heard clearly by all governments, neighbors, and especially world powers. Our election announced to our neighbors and the region that the way of ensuring security in this region is strengthening democracy and respecting people's votes, but not relying on foreign powers.

Noble people of Iran; we are proud of our brave and courageous armed forces in the Army, IRGC, Basij, and the Police and consider their continued authority and power as the guarantor of peace and stability in the region, as well as peace and security of our people.

Now that your president-elect has been given the mission by you to begin its work with an increasing momentum with more hard-working companions, learning from past experiences, full of invaluable experiences from the 11th administration and with a bright and promising outlook and a fresh spirit replete with love and affection to all Iranians, I reach out to you more then before.

In this difficult but full-of-honor road, I ask the Almighty God to help us join hands with empathy and firm resolve to build our dear Iran with a firm determination and high hopes.

I consider myself committed to my plans and everything I announced and, with a firm resolve and trust in your continuous support, I will being my steps in this path.

I consider it necessary to thank all people at work for holding this glorious election, especially the Guardian Council, Ministry of Interior, Governor Generals, Governors, all executive and supervisory forces, police and security forces, and public and social media, appreciating their hard work in safeguarding people's votes.

Peace, mercy and blessings of God be upon you all.