Zarif, Khamenei Lash Back at Tillerson 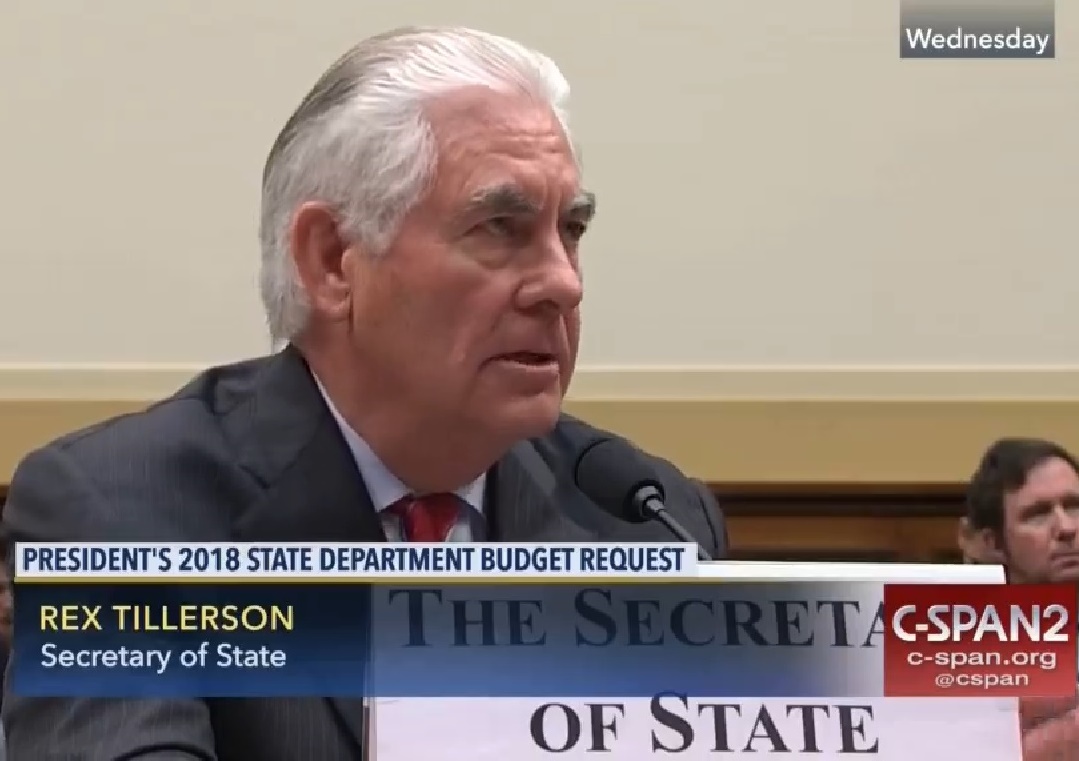 On June 14, Secretary of State Rex Tillerson implied that the United States supports regime change in Iran, which would be a significant departure from U.S. policy under previous administrations. Representative Ted Poe (R-TX) asked Tillerson, who was testifying on the budget request for the State Department and USAID, if the United States supports peaceful regime change. “Our policy towards Iran is to push back on this hegemony, contain their ability to develop nuclear weapons, and to work towards support of those elements inside of Iran that would lead to a peaceful transition of that government,” Tillerson told the House Foreign Affairs Committee.

Iranian Foreign Minister Mohammad Javad Zarif condemned Tillerson’s remarks in a series of tweets. “Before reverting to unlawful & delusional regime-change policy towards #Iran, US Administration should study and learn from history,” he wrote. Zarif was referencing the CIA-led 1953 coup that overthrew Prime Minister Mohammad Mossadegh’s government and restored the monarchy. In 2000, Secretary of State Madeleine Albright formally apologized for the U.S. role. But Iranian officials, including the supreme leader, have continued to accuse Washington of trying to foment regime change. The following are Tillerson’s remarks with reactions from Iranian officials.

Rep. Ted Poe (R-TX): The State Department can lead the effort to designate the IRGC (Islamic Revolutionary Guard Corps) as a state – or as a sponsor of terror. I personally think that the State Department should designate them as a sponsor of terror under 13224 and I would hope that would be on your radar to do. They are doing bad things throughout the world, on behalf of terrorism and destroying human rights of many people. I’d like to know what the policy is of the U.S. toward Iran. Do we support the current regime? Do we support a philosophy of a regime change – peaceful regime change? There are Iranians in exile all over the world, some are here, and then there are Iranians in Iran that don’t support the totalitarian state. So is the U.S. position to leave things as they are or support a peaceful long-term regime change?

Secretary of State Tillerson: Well our Iranian policy is under development, it has not yet been presented to the president, but I will tell you that we certainly recognize Iran’s continued destabilizing presence in the region, their payment of foreign fighters, their export of militia forces in Syria, in Iraq, in Yemen, their support for Hezbollah. And we are taking action to respond to Iran’s hegemony. Additional sanctions actions have been put in place against individuals and others. We continually review the merits, both from the standpoint of diplomatic, but also international consequences of designating the Iranian Revolutionary Guard in its entirety as a terrorist organization – as you know we have designated the Quds. Our policy towards Iran is to push back on this hegemony, contain their ability to develop nuclear weapons, and to work towards support of those elements inside of Iran that would lead to a peaceful transition of that government. Those elements are there, certainly as we know.

1|4 Before reverting to unlawful & delusional regime-change policy towards #Iran, US Administration should study and learn from history.

2|4 The 1953 coup debacle & the 1979 Revolution proved that Iranian people are impervious to outside attempts to decide their destiny.

3|4 After decades of failed regime change & sanctions, US had to apologize for '53 coup, and acknowledge diplomacy as the only option.

4|4 For their own sake, US officials should worry more about saving their own regime than changing Iran’s, where 75% of people just voted.

“Don’t take all the huff and puff of the newcomer in the U.S. seriously. The U.S. has always wanted to overthrow the Islamic establishment in Iran.”

“Our revolution faced big enemies from the start.”

“The only thing that has changed, is the tone of the speech; We have always faced the huff and puff since the early days of the revolution-for nearly 40 years [until] now! They couldn’t do anything then, when the newly born revolution was a small seedling in the ground; they surely can’t cut it down now, since its grown into this strong fruitful tree!”

“You say you want to change the Islamic Republic? You have always wanted to overthrow the system; and you always failed with everything backfiring on you, and of course that won’t change!”

“You see that since the outset of the revolution, these people who wished elimination of the Islamic Republic are now in the abyss of Hell and have left this world without having achieved their goal.”

“Everybody must know this; both the enemy must know this and devout friends, [and even] those friends who are sometimes overcome by doubt [must know this]. The Islamic Republic is standing fast and know that they [enemies] cannot slap us in the face, but we will slap them in the face.”

― June 18, 2017, in a meeting with families of martyrs of the Iranian Army, IRGC, and Police via Khamenei.ir and PressTV

“Being confused, influenced by unsuitable assertions, and escaping reality are clear features of the new U.S. administration’ foreign policy, a recent example of which is obvious in U.S. officials’ comments.” “The meddlesome remarks are in clear breach of rules of customary international law, unacceptable and strongly condemned.” “No doubt, such crude and inappropriate remarks are voiced with a futile intention to induce division in the unified Iranian nation or the government. But these attempts are doomed to failure as it was the case in the past four decades.” “The only way ahead of U.S. officials to obtain a correct understanding of realities in Iran and the region and to stop the ineffective us of threats and intervention in domestic affairs of Iran and other regional countries. The US.. needs to adopt a realistic, rational and unexcitable outlook toward developments in Iran and the Middle East.” “The U.S. needs to realize that historical, geographical, and cultural realities, just like sustainable security and stability, are above doing business and bribing regional countries; grasping such realities demand thinking, understanding, and wisdom.”

“The continuation of the previous U.S. administration’s unconstructive policies against Iran shows that American leaders make excuses to escalate tension and instability in region by disregarding internationally accepted norms.”

“U.S. hardliners and ISIL are two sides of the same coin; both pursue common objectives by different tolls to leave adverse effects and securitize the internal sphere of Iran.”

“Resistance economy and strengthening the internal power structure of the establishment is Iran’s strategic way for managing economic, political and security changes, with or without sanctions.”

In the name of God, the most Compassionate, the most Merciful

Upon instructions from my Government, I have the honor to bring the following to your attention:

1. Mr. Rex Tillerson, the Secretary of State of the United States, during his address before the House Foreign Relations Committee on 14 June 2017 stated 'the US policy towards Iran is to work towards support of those elements inside of Iran that would lead to a peaceful transition of that government. Those elements are there, certainly as we know.'

2. This statement is a brazen interventionist plan that runs counter to every norm and principle of international law, as well as the letter and spirit of UN Charter, and constitutes an unacceptable behavior in international relations.

4. Interestingly, Mr. Tillerson’s statement coincides with the release of newly declassified documents that further clarify how the US agencies were behind the overthrow of Dr. Mohammad Mossadegh, the popular and democratically elected Prime Minister of Iran, on 19 August 1953. That CIA-backed coup abruptly interrupted the path of Iran towards independence, democracy and development and imposed and upheld a 25-year long dictatorship that left deep scars on the Iranian society and its collective conscience.

5. It also came weeks after vibrant presidential and local elections in Iran in which more than 71 percent of the Iranian people participated. The people of Iran have repeatedly proven that they are the ones to decide their own destiny and thus US attempts to interfere in Iran domestic affairs will be doomed to failure. They have learned how to stand strong and independent, as demonstrated in the 1979 Islamic Revolution.

6. The Iranian government expects that all States condemn such grotesque policy statements and advise the US government to act responsibly and to adhere to principles of the UN Charter and international law.

I should be grateful if you would have the present letter circulated as a document of the Security Council.

Please accept, Excellency, the assurances of my highest consideration.

“Unfortunately, there are some people inside the country who are showing the green light to enemies and sending certain signals to entice them.”

“These people are either ‘enemy combatants’ or ‘corrupt on earth.”

Tillerson’s comments were “outside diplomatic norms and insulting.”

“The security forces, especially the Intelligence Ministry and the Revolutionary Guard, should vigilantly pursue and uncover these activities.”

“The judiciary will also deal with them without fearing all the hoopla on human rights.”

“After recent events, the threat of enemy infiltration has increased and all the relevant agencies should monitor all aspects of the situation.”