On June 5, Bahrain, Saudi Arabia, the United Arab Emirates (UAE), and Egypt cut diplomatic ties with Qatar in a coordinated move. They accused Qatar of destabilizing the region by supporting the Muslim Brotherhood, ISIS, al Qaeda, Iranian-backed groups in Saudi Arabia and Bahrain, and Houthi rebels in Yemen. Yemen, the Maldives and Libya’s eastern-based government also cut ties with the small Gulf nation. Only two Gulf Cooperation Council states, Kuwait and Oman, did not cut ties. Kuwait offered to mediate. 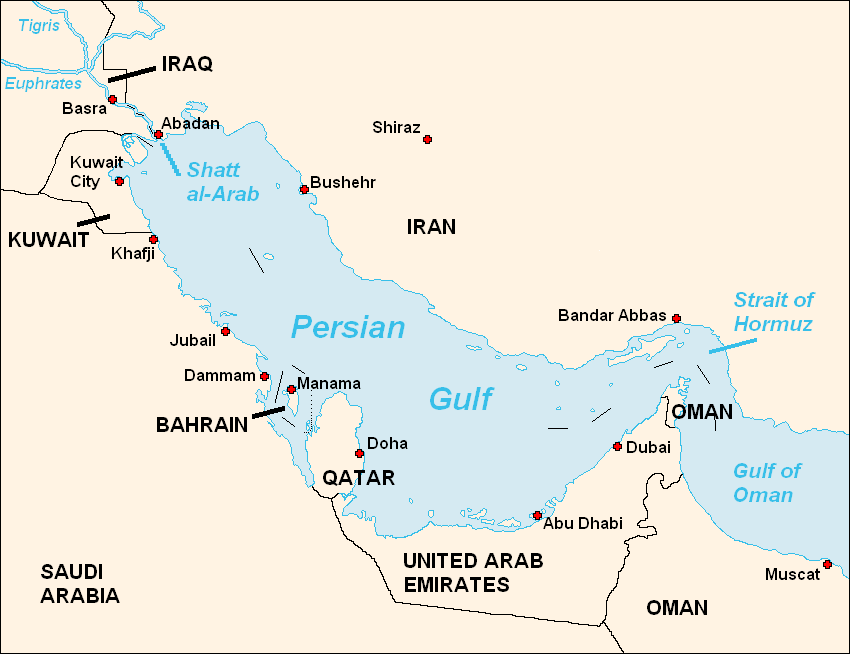 Iran criticized Qatar’s neighbors taking further moves to isolate it. Saudi Arabia, the UAE and Bahrain gave Qatari nationals two weeks to return home. They banned their citizens from travelling to Qatar. Saudi Arabia closed its land border with Qatar, through which the small country imports some 40 percent of its food. Qatar Airways was forced to change its routes because it was barred from large areas of airspace. “Coercion is never the solution. Dialogue is imperative, especially during blessed Ramadan,” Foreign Minister Mohammad Javad tweeted. The head of Iran’s Agricultural Products Exporters Union, Seyyed Reza Noorani, said Iran was ready to export agricultural and food products to Qatar through three Iranian port cities.

Qatar denied interfering in the internal affairs of other countries. It said it was the victim of a media “campaign of lies that have reached the point of complete fabrication.” The statement from the foreign ministry seemed to reference a fake article published on Qatari state media in May 2017. The report said Emir Sheikh Tamim bin Hammad al Thani referred to Iran as an “Islamic power” and that Qatar’s relations with Israel were good during a military ceremony. Qatar said the website was hacked and that the article’s contents were false. Other controversial statements were reportedly broadcast on state television and on social media.

Kuwait presented Qatar with a 13-point list of demands from Saudi Arabia, Bahrain, the UAEA and Egypt. The Associated Press published a translation of them on June 23. The first demand was to cut ties with Tehran:

Qatar-Iran relations have been strained by the Syrian conflict because they support opposing forces. Iran has provided military and financial support to the Assad regime while Qatar has reportedly supported rebel groups. Yet their relationship has not been nearly as antagonistic as the Saudi-Iran relationship. Qatar and Iran share the world’s largest independent gas field deep underneath the waters of the Persian Gulf. The following are Iranian reactions to the Gulf split.

Neighbors are permanent; geography can't be changed. Coercion is never the solution. Dialog is imperative, especially during blessed Ramadan

“[The] European Union has the required values and capacities to help settle the conflicts in the Middle East; we are in need of a regional security convention to prevail dialogue over fear and threat.”

“Accusing Doha indicates irresponsibility regarding the issues in the region.”

― June 26, 2017, in an annual meeting of the European Council on Foreign Relations in Berlin, according to Fars News

“We have to abandon delusions of zero-sum foreign policy, that geography can be changed, and that we can overcome our neighbors.”

“We need a Persian Gulf regional security forum to promote dialogue over demonization.”

“One day it’s Iran, today it’s Qatar. It’s an attempt to evade responsibility, escape accountability for this very fundamental…failure of the state system to address, to respond to the demands of its population.”

― June 26, 2017, in an annual meeting of the European Council on Foreign Relations in Berlin, according to Iran Front Page

“We are concerned about escalation of tension between Qatar and its neighbors. We believe that talks are the best way to settle differences and are ready to help facilitate this process.”

― June 19, 2017, in a meeting with Algerian Foreign Minister Abdelkader Messahel, according to Mehr News

“I believe the message that needs to be delivered to all Persian Gulf states as well as other countries in the world is that there is no longer any room for problems and disputes. The only way to resolve differences is through negotiations and friendly efforts.”

“Any effort for breaking the will of nations has often led to strengthening of their wills.”

― June 14, 2017, in an interview with Al Jazeera news agency, according to Mehr News

― June 13, 2017, at the opening ceremony of the Oslo Forum, according to Iran Front Page

“We are a neighbor of Qatar and we always want positive relations with all our neighbors. And that does not exclude any of our neighbors.”

“If our Qatar neighbors require assistance from Iran, Iran will be ready to provide that assistance. It is not assistance, it is normal trade which we believe everybody should prepare to conduct with others.”

“We have open borders with Qatar, we have open lines of communication with Qatar and we are prepared to continue to allow normal business, normal trade with Qatar in areas that the private sector and public sector find it useful for them to engage.”

Hamid Aboutalebi, Deputy Chief of Staff to the President

“What is happening is the preliminary result of the sword dance. I had already written that the era of creating coalitions and Big Brother is over, and political domination, security clannishness, occupation, and invasion is not going to bring about anything other than insecurity.

“Today, I am writing that the era of sanctions is over too, and cutting diplomatic ties, closing borders, laying sieges on countries, and ejecting countries out of selfsame coalition, etc. is not the way out of the crisis.

“Saudi Arabia, Egypt, the United Arab Emirates and Bahrain which are fragile to such an extent in the face of a small country have no other way than democracy inside and dialog in the region.

“The question is how a small country has been able to topple the Bahraini government, support Daesh and al-Qaeda as well as extremism in the Sinai Peninsula and cause split in the coalition.

“You cannot do a sword dance at one place, and court others elsewhere.”

— June 5, in a series of tweets, according to PressTV

“Riyadh’s move was reminiscent of the monarchy’s freezing of diplomatic relations with Iran last January, which followed by Bahrain and a few small nations.”

— June 5, according to Fars News Agency

“The first outcome of US President Donald Trump’s visit to Saudi Arabia is the emergence of differences between Riyadh and Doha governments.”

“The interference of the foreign countries, specially the US, as known enemy of Muslim countries, cannot help resolve the problems of the regional countries.”

— June 5, according to Fars News Agency

“The solution to differences among regional countries, including the current dispute between Qatar and its three neighboring states, is possible only through political and peaceful methods as well as transparent and explicit dialogue among the involved parties.

“The Islamic Republic of Iran calls on all neighbors involved in the ongoing disputes in south of the Persian Gulf to learn from the bitter experiences in the region...and move toward decreasing tension and restoring peace while exercising restraint.”

“Iran, as its consistent position and principle, stresses that increased tensions in relations among the governments of the neighboring countries of the region suffers from the consequence of widespread crisis, terrorism, extremism and the continued occupation of the Palestine by the Zionist regime and are never in the interest of any of the involved sides and threatens the people of the region.

“The Islamic Republic of Iran urges all the neighbors involved in the current conflict in the south of the Persian Gulf to take lessons from the bitter experiences of the region, stay away from the emotional moves and return to rationality and prudence, to reduce tension and return to the peace with maximum restraint.

“In today’s interconnected world, inefficient use of sanctions is condemned, rejected and unacceptable.

“Maintaining national sovereignty and territorial integrity and non-interference in the domestic affairs of sovereign states and respect for internationally recognized borders, are fundamentally recognized principles of international relations and law that must be respected by all parties.”

— June 5, in a statement, according to PressTV and Mehr News

“I said before that the bad timing of Riyadh Summit and the wrong list of participants in it could lead to adverse consequences in the wake of foreign meddling in regional affairs.”

“The sides need to settle their issues through political solution and negotiations. We invite all to show calm and restraint. We want to maintain relations with all our neighbors and we do have what it takes to further develop cooperation with them.”

“The first outcome of US President Donald Trump’s visit to the [Middle East] region was the emergence of divisions among regional countries.

“Iran has always emphasized that regional issues must be resolved by the countries in the region.”

— June 5, according to PressTV

“The Islamic Republic of Iran has always believed, however, that regional issues should be settled by regional countries themselves.”

“The output of Trump’s trip to Saudi Arabia was signing of the biggest arms deal. The two-year war in Yemen in which over 10,000 Arab Muslims have been slaughtered by Saudi regime’s forces is backed by the US and their weapons.

“Therefore, it is not too-farfetched that today we are witness to more negative incidents in the region.

— June 5, according to Mehr News

“The Saudi King, emboldened by US and Israel, is seeking to devour Bahrain and Qatar.”

“Saudi Arabia is planning to impose full guardianship on Qatar, after what the regime did with Bahrain.”

“I remember that Saddam Hussein said of his attack on Kuwait that ‘why the Arab Ummah should be scattered; the Arab world needs to be united into two or three countries in order to fight against the Turks and Persians’.

“[Saddam’s] pretext for attacking Kuwait was to form an Arab Ummah. After him, ISIL started talking about the unification of Iraq and Syria, and today, King Salman of Saudi Arabia is where Saddam was, dreaming about devouring Bahrain and Qatar.

“These ignored and backward ideas are further emboldened by the U.S. and Israel so that peace and stability will never get a chance to be established in the region.

“Iran’s Leader said yesterday that differences must be settled through talks, but Al Saud only thinks about bloodshed.”

— June 5, according to Mehr News

“The al Saud’s interference in the internal affairs of Qatar as an independent country on the pretext of (the latter’s) friendship with Iran is the height of aggression and intervention.”

— June 5, on his Instagram, according to Fars News Agency

“Iran is neutral about the recent developments in the Persian Gulf.”

“Dialogue is the only solution to crises in the region.”

“Iran’s aid delivery should not be viewed as a humanitarian one. Iran is not taking side with any certain Arab state in the current tension in the region. Since the beginning of the diplomatic crisis in the region, we have explicitly announced our position and called for dialogue to resolve the problems. We hope to see normalization of ties in the region.”

“The Islamic Republic of Iran is seeking to establish good and positive relations with all states. If asked to mediate, we won’t hesitate to step in with reasonable and logical measures to ease current tensions.”

“Islamic Republic of Iran plays an important role in establishing international peace and stability, as well as preventing rift among regional countries.”