The nuclear deal with six world powers, concluded in mid-2015, raised the starter's pistol on Iran’s recovery from years of international sanctions. But the race didn’t begin until January 2016, when the deal was formally implemented and sanctions were lifted.

Over the next year, the Islamic Republic worked on raising oil exports and securing contracts on energy, infrastructure, and other sectors earlier curtailed by sanctions. The campaign to reinvigorate Iran's economy has been a priority for the government of President Hassan Rouhani, who faces reelection in May 2017. His effort was reflected in visits to Tehran by the Prime Minister of Sweden, the French Foreign Minister, as well as scheduled high-level meetings with Russia in early 2017.

The United States is notably absent from the stream of delegations travelling to and from Tehran. Washington maintains an array of non-nuclear sanctions against the Islamic Republic for terrorism, missile development, and human rights abuses. However, recent data reveals trade between Iran and the United States totaled more than $3 billion between 2006 and 2016 (see table below). 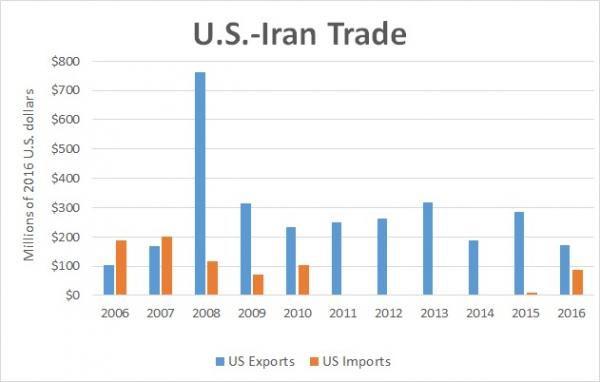 Data based on “Trade in Goods with Iran,” U.S. Census Bureau and adjusted for inflation with the Bureau of Labor Statistics Consumer Price Index calculator for 2016

In 2016, bilateral trade totaled just over $258 million, a slight dip from $296 million total in 2015, according to the U.S. Census Bureau (adjusted for inflation). The overall trade balance was strongly in favor of the United States, with two-thirds of business representing American exports. Agriculture, particularly soybeans and soybean oil, dominated American sales.

In 2015, Iran exported only $11 million in goods, almost exclusively works of art. Iran’s exports rose to $86 million in 2016, the highest level since 2010. Facilitated by the nuclear deal, the eight-fold rise in exports was largely carpet sales worth $56 million. The carpet industry is estimated to directly employ at least 700,000 Iranians. The U.S. Census Bureau also notes the controversial U.S. purchase of heavy water, worth $8.5 million, and the doubling of art imports.

The sales of Persian carpets and food has reflected occasional moments of thawing in US-Iran relations. In 2000, Secretary of State Madeleine Albright announced the lifting of sanctions on carpets, pistachios and caviar. She urged the two countries to “enter a new season in which mutual trust may grow and the quality of warmth supplant the long cold winter of our discontent.” In 2010, the Obama Administration re-imposed an embargo on these goods and then relaxed restrictions in 2016.

The nuclear deal also provided more lucrative opportunities for American exports, notably in aviation. In mid-December, Boeing inked an agreement for the purchase by Iran Air of more than six dozen planes; the reported value was $16.6 billion. The list price of a single 777 exceeds the value of all American exports to Iran last year. Iran has ordered 30 of that model, in addition to 50 Boeing 737 MAX 8s, the total value of which would more than double that of all exports to Iran for the past three decades combined.

The #Iran - #Boeing deal could be worth as much as $18 billion and create tens of thousands of jobs at @Boeing and its suppliers.

The first of Boeing’s deliveries are not scheduled to take place until next year, but the sale faces considerable political turbulence in Washington: there have been voices critical of the deal in Congress, with the House of Representatives passing a bill against it in fall 2016. The White House, which announced new sanctions against Iran for recent missile tests, can also keep the planes grounded if it so chooses. One of the few critics in Iran was Revolutionary Guards Brig. Gen. Mohammad Reza Naghdi, who lamented that the government “poured another $16 billion in their [Americans’] mouths.”

“We cannot build a true relationship on carpets and grain alone,” argued Secretary Albright nearly two decades ago. The unanswered question is whether the nuclear deal will further encourage trade in meaningful ways given ongoing sanctions.

Naysan Rafati is a a TAPIR Fellow at the U.S. Institute of Peace.