Iran’s Response to US Sanctions

Iranian officials have reacted angrily to new U.S. sanctions, signed into law by President Donald Trump on August 2. The bill, which also deals with Russia and North Korea, directs the President to impose sanctions against Iran’s ballistic missile or WMD programs, the sale or transfer to Iran of military equipment or related technical or financial assistance, and the Islamic Revolutionary Guard Corps (IRGC). The legislation first passed in the House of Representatives on July 25 with a 419-3 vote, then passed in the Senate on July 27 with a 97-2 vote.

Deputy Foreign Minister Abbas Araghchi said the move constituted a violation of the nuclear deal. "The Americans should know that they will be harmed more by such moves, as such acts will isolate them in the world,” warned President Hassan Rouhani. The following are Iranian reactions to the sanctions.

"The Americans should know that they will be harmed more by such moves, as such acts will isolate them in the world." 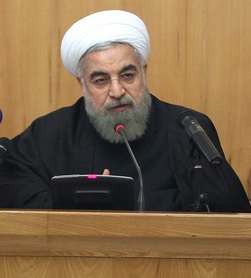 “As a first step, the Islamic Consultative Assembly will take its steps and we will take any steps that we believe is necessary for strengthening our country without paying attention to their sanctions and policies.”

“If Americans want this critical region to be stable and secure, they must abandon such policies and know that our government, courageous leader and people will never be affected by these conspiracies and will continue moving on its track.”

“The only way that is left for the United States is that they must respect the Iranian nation and the Islamic Republic of Iran's rights and know that it is only by respecting people's rights that their own interests will be guaranteed.”

“They sanctioned Iran; but sanctions made us aware of our potentials and despite all hostilities, the Islamic republic is more powerful than ever. We are not afraid of enemy’s plots and we know how to deal with them; Revolutionary identity and diligent work would help the country to move ahead despite all countering measures by the enemy.”

“Islamic Republic must strongly stand against any hegemonic power; surrendering to bullying powers brings misery to the nation and is much costlier that standing against them.”

“International interaction must not make us neglect enemy’s plots as some foreign states just seek destruction of Iran.”

“The sanctions, of course, caused problems for the country, but [made us] open our eyes to our own capabilities. We use all the enmities to our own benefit.”

― August 3, 2017, at President-Elect Hassan Rouhani’s Endorsement Ceremony, according to Mehr News and PressTV

"The recent measure by the US congress is a hostile move and the Islamic Republic of Iran will certainly adopt a decisive measure against it."

­—July 31, 2017, in a meeting with Iran’s National Security and Foreign Policy Commission

"In our view the nuclear deal has been violated and we will show an appropriate and proportional reaction to this issue… …"We are definitely not going to act in a way that get us entangled in the politics of the American government and Trump."

Iran - unlike the U.S. - has complied in good faith with the letter AND spirit of JCPOA. Rhetoric & actions from U.S. show bad faith. 1/3

Every word of JCPOA carefully negotiated. Iran does not develop missiles that are “DESIGNED to be capable of delivering nuclear weapons”.2/3

Iran is not & will not be developing nuclear weapons; so by definition cannot develop anything DESIGNED to be capable of delivering them.3/3

“Iran will continue its resistance against US hostile moves and make efforts in earnest toward the establishment of stability and security in the region.”

“Iran reserves the right to a reciprocal measure against the US government’s anti-Iranian moves. The Islamic Republic will not fall into the trap of the ominous triangle of Arrogance-Zionism-Wahhabi terrorism.”

“Iran will act in the right time with the necessary patience, composure and judiciousness and in line with the interests of the people and Iran’s national security.”

“The move by chaos-seeking bullies and extremist, malevolent elements ruling the United States once again displayed the US’ unilateralism and illogical hostility.”

“The Islamic Republic of Iran will not remain tight-lipped in the face of the US’ violation of the JCPOA, and the Iranian Parliament and government will soon announce a series of reciprocal measures to respond to that.”

“Iran will, by no means, allow the expansionist and destabilizing policies of other to bear fruit.”

The sanctions bill was a “retrogressive, illegitimate, illogical move, which runs contrary to all human rights principles and international regulations.”

“This is the latest example of hostility towards the civilized Iranian people and an insult to all freedom-seeking people in the world.”

“The US' hostile measures aim at both violating the Joint Comprehensive Plan of Action (JCPOA) in some way and also expand the scope of their unjust sanctions against Iran… …this indicates that the US has not learned anything from the great Iranian nation and has forgotten that these people persisted for years under economic problems and during the Imposed War.”

“With regard to the imposition of new sanctions by the US, in addition to diplomatic measures, which should be taken, a complaint had to be filed with the relevant commission (the Iran-P5+1 Joint Commission) and this has been done… …Iran’s JCPOA supervisory body assessed the new US sanctions and decided that they contradict parts of the nuclear deal[.]”

“The message of the unanimous vote [on counter-measures to American sanctions] is that there is coordination and unity in the Iranian parliament for taking actions against the US Congress measures.”