The Iranian media reported that several minors also signed up, including a five-year-old boy and a six-year-old girl, apparently to expose flaws in the electoral system. Parliamentary speaker Ali Larijani criticized candidates who lacked qualifications, but he also blamed the Guardian Council for not detailing specific guidelines. Larijani called the process a “mockery of the regime.”

Iran’s constitution was amended in 1989 to introduce an executive presidency and abolish the job of prime minister. The next three presidents—Ali Akbar Rafsanjani, Mohammad Khatami, and Mahmoud Ahmadinejad—served two consecutive terms. But Iranian elections have often produced surprises. Khatami and Ahmadinejad were both dark horses little known to the electorate.

*Only eight candidates were allowed to appear on the Islamic Republic of Iran Broadcasting (state media).

Iran’s 1979 constitution does not specify a gender for the presidency. The Guardian Council has never cited gender as grounds for disqualification, although the 12-man body responsible for vetting candidates has also never “qualified” a female candidate.

The lack of clarity stems from Article 115 of the constitution, which says the president should be elected from among “religious and political rejal.” In December 2016, a spokesman for the 12-man body said it had not yet concluded whether rejal refers exclusively to men. The word is originally from Arabic and means “men” in most cases but could also be read as “personalities.”

The first woman to register to run, in 1997, was Azam Taleghani, a women’s rights advocate and the daughter of a prominent revolutionary cleric. She registered again in 2009.  Now in her seventies and using a walker, Taleghani registered to run for a third time in 2017.

73-year-old Azam Taleghani is registering as a candidate in the upcoming vote for Iran's presidency for the 3rd time https://t.co/0lt5zBsdTJ pic.twitter.com/gtyy8iT7nr

"Women make up 50 percent of the Iranian population, so the country deserves at least one female candidate," she said. Her goal was to test the intent of Iran’s constitution. ​"I've come so that the issue with political 'rejal' can be resolved," she told the local press when she registered on April 17.

For Iranian leaders, voter turnout is critical to prove the legitimacy of the Islamic Republic. “They are a source of national dignity, of strengthening the people of Iran and of their reputation,” Supreme Leader Khamenei said in March 2017. He has encouraged the public to turn out for the May 19 election.

In absolute numbers, voter turnout has generally increased since 1980, a reflection of Iran’s soaring population growth. But the percentage of voters—proportionate to eligible voters—has fluctuated significantly. According to government data, the low point was 51 percent in 1993 to a high of 85 percent in 2009. The 2009 reelection of Ahmadinejad was widely disputed, however, by allegations of fraud. The Islamic Republic does not allow independent monitoring, so verification is impossible. 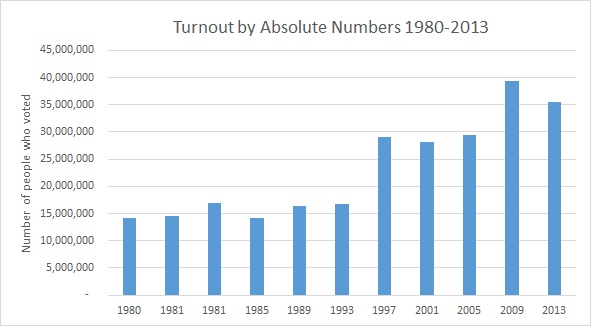 Some 55 million Iranians are eligible to vote in the 2017 election.

The 2009 presidential debates on state-controlled television were the first to be broadcast live in Iran. The 2013 debates were particularly fiery, with candidates lashing out at rivals and charging each other with failing the revolution.

The 2017 debates were initially to be taped in advance. "Based on a decision by the Election Campaign Monitoring Commission, the election debates of the candidates will be broadcast pre-recorded," Interior Ministry Spokesman Seyed Salman Samani announced on April 20. The election commission also issued new debate guidelines, warning candidates not to “blacken the image of the country… or the actions of the executive, administrative, legislative or judicial bodies.”

At least three of the final six candidates called on the commission to reverse its decision. “I don't want to interfere,” Rouhani said, “but I would like the election headquarters to review these discussions.” Raisi and Qalibaf also were critical. In a sermon, Ayatollah Mohammad Ali Mohavedi Kermani also called for live broadcast of the debates.

A few days later, the ministry decided to air the debates live. “After deamnds by the Iranian nation and the candidates for a review, the presidential elections campaign commission decided… that debates may be broadcast live,” it said in a statement. The first debate is scheduled for April 28.

Deputy Foreign Minister for Consular, Parliamentary and Iranian Expatriates’ Affairs Hassan Qashqavi has announced that Iranian expatriates can vote in 103 countries. A total of 279 stations and 132 embassies and consulates will be open for voting. Qashqavi said that approximately 2.5 million Iranians are eligible to vote in 2017.

April 21-May 18: Campaign period goes until 8 A.M. the day before the election

May 19: Election Day (second round to be scheduled if the leading candidate receives less than 50 percent of the vote)

Garrett Nada, managing editor of The Iran Primer, and Daniel Schnur, a research assistant at the U.S. Institute of Peace, contributed to this roundup.