By Garrett Nada
Iran’s new Majles, which holds its first session on May 28, has wider political diversity than any parliament in a dozen years. Some 60 percent of lawmakers are newcomers. Allies and supporters of President Hassan Rouhani form the largest faction, but not a majority. Hardliners held on to more than a quarter of Parliament’s 290 seats. The balance of power, however, is yet to be determined because independents won more than a quarter of the seats; many of their affiliations are unclear or could shift.
The social and professional make-up of parliament is also changing. Women won a record number of seats in the February election and April runoff. For the first time, females will outnumber clerics.

Iran’s system does not have formal parties, but it does have factions and coalitions that run together. The largest bloc in the parliament is the Faction of Hope, most of whom are aligned with Rouhani. The group claims support of up to 168 members. Hardliners claim to have at least 150 members. Some candidates ran as independents or even on multiple lists, so their affiliations are not clearly defined. Politicians also changed their positions closer to the election. Iranians jokingly referred to them as “Hezb-e Bad,” or “Party of the Wind.”
Iranian politics are also notoriously fluid. Even within factions, candidates do not necessarily have the same positions on all issues. Two lawmakers who may agree on foreign policy may differ on economic or social issues. But the variety of views is limited by the Guardian Council’s heavy vetting. It disqualified some 60 percent of the 12,000 people who registered to run. The last three parliaments were dominated by conservatives. 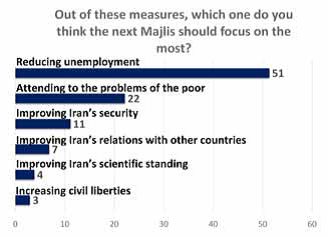 The new Majles’ priority is likely to be improving the economy. In March 2016, a majority of Iranians said they want lawmakers to focus on reducing unemployment, according to a poll by the Center for International and Security Studies at Maryland (CISSM), working in conjunction with the Program for Public Consultation and IranPoll.com. The second priority for Iranians was attending to the problems of the poor.
Sanctions relief has yet to have a significant impact. Businesses began to move into the Iranian market after sanctions were lifted in January. Many banks and businesses, however, still have reservations about doing business with Iran due to lack of clarity on sanctions and also due to Iran’s need for banking and economic reform. Although Rouhani succeeded in cutting inflation from 14 percent in 2015 to 8 percent as of May 2016, Iran still can do more to create jobs and ensure sustainable growth, according to the International Monetary Fund.
Another issue that Parliament could debate early on is Rouhani’s Citizens’ Bill of Rights. In April 2016, Foreign Minister Mohammad Javad Zarif told The New Yorker it could be the first initiative Rouhani tries to put before the Majles. The draft, published in late 2013, was viewed as a major step towards fulfilling his promises to improve the human rights situation. But rights groups pointed out deficiencies, and Rouhani has yet to make headway on the issue. The Citizens’ Bill of Rights does not require parliamentary approval, according to Zarif. But Rouhani “may want to put in place certain procedures and guarantees and mechanisms, so that may require parliamentary approval,” he said.

The following are profiles of key lawmakers who illustrate the diversity of Iran’s incoming Majles and have differing views on these issues.

Mohammad Reza Aref, a reformist, garnered 1.6 million votes for a parliamentary seat from Tehran, more than any other candidate. Aref headed the “List of Hope,” a coalition that included reformists and centrists who support Rouhani. Their slogan was “Hope, peace, and economic prosperity.” The group associated itself with the success of the nuclear deal, the lifting of international sanctions, and normalizing political and economic relations with the outside world. Candidates on the slate advocated greater personal and political freedoms. After the election, the coalition renamed itself the “Faction of Hope.” Aref is its leader.
Born in 1951, Aref studied electrical engineering and did graduate work at Stanford University in the late 1970s. He was a professor at Isfahan University of Technology from 1981 to 1994. He then served as president of Tehran University from 1994 until 1997, when he was appointed telecommunications minister under former President Mohammad Khatami. In 2001, President Khatami appointed him to be one of his vice presidents. In 2002, Aref became a member of the powerful Expediency Council, the body charged with resolving disputes between Parliament and the Guardian Council. In 2013, Aref ran for president but eventually dropped out of the race to support Rouhani, a centrist candidate.

On May 19, Aref announced that he would run for Speaker of Parliament. Former Presidents Khatami and Akbar Hashemi Rafsanjani indicated support for Aref. His agenda on legislative priorities differ significantly from Ali Larijani, who was speaker for the previous eight years.
Ali Larijani
Ali Larijani, a conservative who ran as an independent, won his seat from the holy city of Qom. He served as Speaker of Parliament between 2008 and 2016. Many of his allies did not win reelection. As election results were announced in February, Larijani praised the rotation of political power from one group to another as an auspicious development. Larijani is considered a principlist, but more pragmatic than other hardliners. He opted not to join the main list of hardliners for the election. In Tehran, the Grand Coalition of Principlists failed to win any seats while the “List of Hope” won all 30. “I feel our friends in the [conservative coalition] have not provided the necessary mechanisms for the creation of unity,” he said. “Therefore we seek to act independently.” Yet he won the backing of Qassem Soleimani, the commander of Iran’s elite Qods Force, who cited Larijani’s long support of “revolutionary movements.”

Born in 1957, Larijani is the son of Ayatollah Mirza Hashem Amoli and son-in-law of Ayatollah Morteza Motahari. His father was a prominent religious authority.  Larijani studied mathematics and computer science at Sharif University of Technology. He earned advanced degrees in philosophy from Tehran University. After serving as a commander in the Revolutionary Guards, he held a variety of positions in the state-run Islamic Republic of Iran Broadcasting (IRIB), the Ministry of Labor and Social Affairs, and the Ministry of Telecommunications. From 1991 to 1993, he served as Minister of Guidance and Islamic Culture. From 1994 to 2004, he was President of IRIB.
In 2004, Larijani became an advisor to Khamenei. In 2005, he made an unsuccessful run for president. Later that year, Khamenei appointed him Secretary of the Supreme National Security Council, replacing Rouhani. In that capacity, Larijani acted as lead negotiator on Iran’s nuclear program. But he resigned in 2007, reportedly over tactical disagreements with President Mahmoud Ahmadinejad over the nuclear talks. In 2008, Larijani ran for Parliament and won a seat representing Qom. He went on to become Speaker of Parliament and held the position for two sessions. Larijani is also a member of the Expediency Council.
Larijani is the presumed conservative candidate for the speakership in the next Parliament, although he was attacked by hardliners for cooperating with Rouhani’s government. He supported the nuclear deal between Iran and the world’s six major powers, referring to it as a “national achievement” even though Iran did not get everything it wanted. In May 2016, he lauded the Rouhani administration for acting more lawfully and more cooperatively with Parliament than the Ahmadinejad administration. Larijani favors consensus in politics and could act as a broker between hardliners and the other factions.
Ali Motahari
Ali Motahari is a moderate conservative who fielded his own independent list called “Voice of the Nation.” His name was also included on the “List of Hope.” He could become a kingmaker in the next Parliament because he straddles reformists and hardliners. In an interview before the elections, he said that hardliners do not place enough emphasis on freedoms while reformists do not pay enough attention to cultural issues. He has criticized the government for putting the two Green Movement leaders and former presidential candidates, Mir Hossein Mousavi and Mehdi Karroubi, under house arrest in 2011. Although he has taken a conservative stance on cultural issues, like the dress code for women, Motahari has largely been supportive of President Rouhani. In March 2015, he was physically attacked by alleged hardliner critics.

#Iran MP Ali Motahari has said that he will run as a candidate for deputy parliament speaker in the next parliament. pic.twitter.com/ETVSivpIYC

Born in 1958, Motahari is the son of the late Ayatollah Morteza Motahari, a leading theologian and political activist who was close to revolutionary leader Ayatollah Ruhollah Khomeini. He is also the brother-in-law of Ali Larijani. Motahari studied mathematics and mechanical engineering at the University of Tabriz. He worked at IRIB and studied philosophy at the graduate level before going on to publish books and academic articles and eventually teach at various universities. In 2008, he ran for Parliament and won a seat representing Tehran. Motahari was a fierce critic of Ahmadinejad.
Motahari is known for being outspoken. After the post-election disqualification of Minoo Khaleghi, a female reformist candidate from Isfahan, he called for her reinstatement. The Guardian Council did not give an official reason for her disqualification, although some have speculated that a photo of her shaking hands with a man and not wearing a hijab might have triggered the decision. Critics of the disqualification argued that the Guardian Council does not have the power to disqualify someone after an election. Motahari said that the Interior Ministry must allow Khaleghi to take her seat or else Parliament will impeach the interior minister. He wrote an open letter to the Guardian Council head, Ayatollah Ahmad Jannati, insisting on her reinstatement.
Alaeddin Boroujerdi
Alaedddin Boroujerdi is a conservative lawmaker from Boroujerd in the western province of Lorestan. Like Larijani, he chose to run as independent rather than join the hardliner Grand Coalition of Principlists list. Boroujerdi kept his seat after winning in the April runoff.

Born in 1950, Boroujerdi majored in laboratory sciences at the University of Tabriz and did graduate work in international relations at Tehran University. Throughout the 1970s, he worked at the Red Crescent in Dubai and was later apprehended and interrogated by the shah’s SAVAK secret police upon returning to Iran for organizing against the monarchy. After the revolution, he began climbing the diplomatic ranks in 1981. Boroujerdi served as deputy foreign minister for Asia-Pacific affairs in the 1990s, deputy international affairs advisor to the supreme leader and deputy minister of foreign affairs.
In 2000, the veteran diplomat won a seat in Parliament. In 2007, he was named Chairman of the National Security and Foreign Policy Committee. In 2011, he was reportedly detained for 24 hours on allegations of financial fraud. But Boroujerdi denied the charges and accused the “deviant current”—supporters of Ahmadinejad and his chief of staff, Esfandiar Rahim Mashaei—of targeting individuals loyal to the supreme leader.
In the previous Parliament, Boroujerdi chaired the National Security and Foreign Policy Committee. He was on the 15-member panel of lawmakers that reviewed the nuclear deal. Boroujerdi had reservations, but ended up supporting the deal even while emphasizing his misgivings about Washington. “We are still distrustful of the United States because of the country’s arrogant nature and its support for the Zionist regime [Israel] in the massacre of the oppressed people of Palestine and its move to back Saudi Arabia’s killing of the Yemeni people. In this climate of mistrust, there are concerns and if they renege [on the nuclear agreement], we will do the same,” he said in August 2015.
In early May 2016, Boroujerdi announced his support for Larijani. “As far as I know him, he is the best speakership option for the tenth Parliament,” he said. Boroujerdi also extoled Larijani’s views on foreign policy.
Garrett Nada is the assistant editor of The Iran Primer at the U.S. Institute of Peace.
Photo credits: Mohammad Reza Aref by Foad Ashtari [CC BY 4.0 (http://creativecommons.org/licenses/by/4.0)], via Tasnim News Agency and Wikimedia Commons; Ali Larijani and Alaeddin Boroujerdi via ICANA and Parliran.ir