On May 2, Park Geun-hye became South Korea’s first president to visit Iran. Ministers, economic officials and businessmen joined her for the three-day trip to Tehran. One of South Korea’s key interests in Iran is oil. South Korea, the world’s fifth largest oil importer, is one of the largest buyers of Iranian oil, though sanctions led to a decline in imports in recent years. Since the nuclear deal was implemented in January and sanctions were lifted, however, Iranian oil exports to South Korea have more than quadrupled to 400,000 barrels a day. 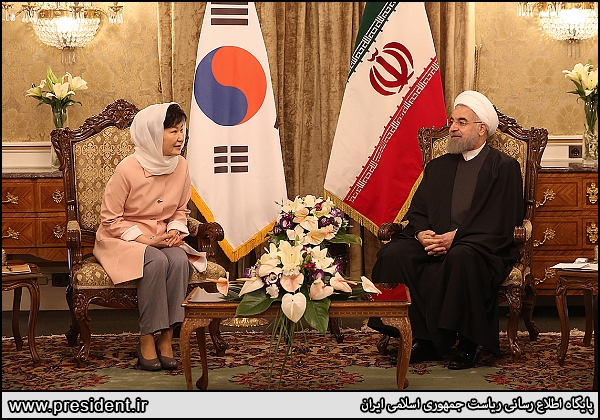 During the visit, officials signed 19 memoranda of understanding and cooperation documents to strengthen bilateral ties in fields ranging from energy to science, culture and more. In a joint press conference with his South Korean counterpart, President Hassan Rouhani said they intended to triple bilateral trade to some $18 billion. The trade volume last reached that level in 2011, before international sanctions were imposed on Iran for its nuclear activities.
The two leaders also discussed the tense security situation on the Korean peninsula and North Korea’s controversial nuclear program. “We seek peace and stability in the Korean peninsula and categorically oppose building any weapons of mass destruction,” said Rouhani. Iran and South Korea established diplomatic relations in 1962, but their heads of state had not previously held bilateral talks, according to Park’s office. The following are excerpted remarks from the visit.
Iranian President Hassan Rouhani
“Ties between the Islamic Republic of Iran and the Republic of South Korea, as two key countries in the Middle East and Eastern Asia, is very important and the two countries have enjoyed positive and constructive relations in the past 54 years.”
“One of these agreements were to turn the relations between the two countries strategic and deep-rooted, establishment of which requires South Korean companies to invest and set up joint economic activities with Iran, coupled with transfer of advanced technology to Iran.”
“Today 19 documents were signed by the officials of the two countries and many more are going to be signed between Iranian and South Korean private sectors.”
“Tourism and establishment of Tehran-Seoul direct flights and also South Korean sectors’ investment in tourism-related infrastructures were also stressed.”
“Iran wishes for peace and stability in the Korean peninsula and we are in principle against producing any kind of Weapons of Mass Destruction. We wish for a world without WMDs and nuclear weapons, especially in the Korean peninsula and the Middle East.”
“We also discussed ending of war in Yemen and starting of Yemeni-Yemeni negotiations to establish security in the country and we also discussed and exchanged views on the Iraqi government’s fight against terrorism, as well as the future of Syria.”
—May 2, 2016, during a press conference
“Long, historical and amicable relations between the two nations is one of the chief bases for developing ties.”
“This visit will further deepen ties in all areas between Tehran and Seoul.”
“We should try to turn the two countries’ bonds into strategic ones with regional cooperation.”
“The Islamic Republic of Iran is ready to draft a framework for long-term and strategic Tehran-Seoul relations in order to develop investment and joint economic activities.”
“We should make attempts to achieve developed relations and increase cooperation…and remove the obstacles.”
“Iran and South Korea can have good cooperation with each other in several fields such as the environment, industry and agriculture.”
“In the field of tourism and creating the right conditions for development of tourism, such as building hotels and establishing direct Tehran-Seoul ties, we should plan and make efforts.”
“We should facilitate this through further academic, cultural and artistic cooperation between the two nations and governments.”
“This creates a good atmosphere for strengthening cooperation between the two countries.”
“The two countries can have joint activities in different sectors such as energy, petrochemicals and steel.”
“Trying to maintain and strengthen regional and international peace and stability is a political and human task for all countries.”
“We believe that the world should become free from any kind of WMD.”
—May 2, 2016, to high-ranking officials
South Korean President Park Geun-hye
“At a time when a new chapter in Iran’s cooperation with the global community has started, this important and historic trip is being made and the two sides are willing to further develop ties and cooperation in various sectors.”
—May 2, 2016, during a press conference
“Iran enjoys experienced and young human resources and manpower and South Korea possesses financial and technological capabilities which can be used to develop and advance ties between the two countries.”
“Development of economic partnership brings sustainable security and turn the region into a centre for peace.”
“South Korea agrees with this view of the Islamic Republic of Iran and can be a good partner for Tehran in doing so.”
—May 2, 2016, to high-ranking officials