The Iran nuclear deal was officially implemented in January, but the controversy hasn’t ended. The White House and Congress are again at odds over a by-product of the deal—the fate of Iran’s heavy water, which can be used as a moderator and coolant in a nuclear reactor. Tehran had shipped 32 metric tons of heavy water to Oman, where it was stuck without a final destination.

In a bid to protect the deal and prevent Iran's use of heavy water in a covert operation, the U.S. Department of Energy announced it would purchase the heavy water, worth $8.6 million. The deal was signed by U.S. and Iranian officials in Vienna, Austria on April 22. “The idea is: OK, we tested it, it's perfectly good heavy water. It meets spec. We'll buy a little of this,” U.S. Energy Secretary Ernest Moniz told The Wall Street Journal. “That will be a statement to the world: ‘You want to buy heavy water from Iran, you can buy heavy water from Iran. It's been done. Even the United States did it.'”
But Congressional Republicans opposed the move and quickly moved to block future purchases. “For Tehran, the nuclear agreement is the gift that keeps on giving. This purchase—part of what appears to be the administration's full-court press to sweeten the deal—will directly subsidize Iran's nuclear program,” House Speaker Paul Ryan (R-WI) said on April 22. “It's yet another unprecedented concession to the world's leading state-sponsor of terrorism.” 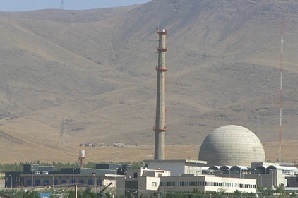 As part of the nuclear deal, Iran is allowed to use heavy water in its Arak reactor, which is still undergoing modifications, but it is required to sell, dilute or dispose of any excess heavy water. Heavy water, which is not radioactive, is key to the production of nuclear energy in some reactors. It also has research and medical applications. But heavy water reactors are also capable of producing plutonium, which can fuel nuclear weapons.
The United States does not currently produce its own heavy water and must buy it from other countries. To save money, it closed a heavy water plant at Savannah River National Laboratory in Georgia in 1981. The heavy water from Iran is to be stored at the Oak Ridge National Laboratory in Tennessee, where it will be used for research. Some of the water could also be sold to private companies for commercial use.
The Department of Energy stipulated that future purchases would not be automatic. “The United States will not be Iran’s customer forever,” it said in a statement. “It is exclusively Iran’s responsibility to find a way to meet its commitments, whether that is by selling, diluting or disposing of future stocks of heavy water to remain within the [nuclear deal’s] limit.”
House Foreign Affairs Committee Chairman Ed Royce (R-CA) said the United States should not provide Iran with any more funds that could be used to develop its nuclear program or export terror. “U.S. purchase of this sensitive material goes well beyond what is required by the nuclear agreement.  Far from curbing its nuclear program, this encourages Iran to produce more heavy water to sell – with a stamp of U.S. approval – on the international market,” he said. House Majority Leader Kevin McCarthy (R-CA) called the purchase a “dangerous precedent” that could “pave the way for either additional transactions with Iran or allow Iran to enter the U.S. financial system.”
On April 25, Senator Tom Cotton (R-AR) filed an amendment to the Energy and Water Development and Related Agencies Appropriation Act that would prohibit the future purchase of heavy water from Iran. On April 26, Senator Cotton released the following statement related to the heavy water purchase:

“The Obama Administration stated that this purchase is a one-time deal and the United States will not become a repeat customer of Iran's over-production of heavy water. Regrettably, it's become difficult to separate fact from fiction when it comes to President Obama sidling up to Iran. It seems the president will go to any lengths to protect his nuclear deal. This amendment would simply hold his Administration to its promise by ensuring that taxpayer dollars cannot be used again for the same purpose. We've given the terror-sponsoring Iranian regime enough concessions at the risk of our security; we should not further subsidize its enrichment activity by making repeated purchases of this material.”
White House Press Secretary Josh Earnest warned on April 27 that “ideologically motivated policy riders are not appropriate for appropriations bills.” He said that Senator Cotton “is certainly no expert” on heavy water. “I'm confident that he couldn’t differentiate heavy-water from sparkling water. His focus is on undermining the effective implementation of this agreement that prevents Iran from obtaining a nuclear weapon.”

On April 27, Senate Democrats blocked the $37.5 billion funding bill to prevent a vote on Cotton’s amendment. The vote to shut off debate on the bill was 50 to 46, and 60 votes would have been needed to advance the bill. Cotton said he offered to subject his amendment to a 60-vote threshold. “The Cotton amendment as written is a poison pill,” Senate Minority Whip Dick Durbin (D-IL) said after a meeting with his colleagues. “The Cotton amendment on this bill would make it veto-bait.”
The Obama administration, backed by most Senate Democrats, argued that it would be better for the United States to buy the heavy water than allow it go on the open market, given the potential proliferation risk. “We know it’s politically charged, we also know it’s not in the best national security interests of the United States for us to let this heavy water go into the global market,” Durbin said.
On April 28, Cotton criticized Press Secretary Earnest for questioning his knowledge of the nuclear deal with Iran. “This guy at the White House may think it's a laughing matter to subsidize Iran's nuclear program, but I don't. I think it's a very serious matter,” Cotton said on MSNBC's “Morning Joe.” He argued that the United States is not obligated to take Iran’s heavy water or “provide U.S. taxpayer dollars to Iran's nuclear program for that heavy water.”
Russia may become the second buyer of Iran’s nuclear material. On April 25, Moscow announced that it was planning to buy 40 metric tons of heavy water.
The following are excerpted remarks by State Department Press Office Director Elizabeth Trudeau on the purchase from an April 22 briefing.
MS TRUDEAU: This heavy water will fulfill a substantial portion of the U.S. domestic demand this year for industry and domestic research applications. This material is not radioactive and does not present safety concerns. This transaction provides U.S. industry with a critical product while also enabling Iran to sell some of its excess heavy water, as contemplated in the JCPOA. Iran’s compliance with the JCPOA meant this material had already been removed from Iran, ensuring it would not be used to support the development of a nuclear weapon.
Our purchase of the heavy water means it will instead be used for critically important research in non-nuclear industrial requirements here in the United States. We expect the heavy water to be delivered to the U.S. in the coming week, initially stored at Oak Ridge National Laboratory, and then resold to – at commercially reasonable prices to domestic commercial and research buyers.
So on technical details about what heavy water is and details on its implementation, I’m going to refer you to the Department of Energy, but I will say heavy water is used in the development, production, and sale of compounds used in chemistry, biomedical and diagnostic research, environmental analysts, and physics.
So I know you had a question too on U.S. domestic reaction, and our response would be no. This was actually an allowable event that happened. So the U.S. was under no obligation to purchase heavy water from Iran, nor is it obligated to do so in the future, but the JCPOA required Iran to reduce its heavy water inventory below the 130 metric ton limit. One way to do that was to sell the excess to countries or companies. And I’d just note in the future it’s possible other countries may wish to purchase that. This was a purchase that was arranged through the Department of Energy for that.
QUESTION: House Foreign Affairs Chairman Ed Royce was – is among those who have been critical, saying the deal actually encourages Iran to produce more heavy water to sell. House Speaker Paul Ryan also had some criticism, saying it seemed to be part of an effort to sweeten the nuclear deal with Iran and would directly subsidize Iran’s nuclear program. Is there a State concern about this criticism in that the U.S. may be seen as enabling Iran with this purchase?
MS TRUDEAU: No. This limit ensures Iran cannot stockpile heavy water for use in a covert reaction. The IAEA’s monitoring and verification measures will ensure that we know if Iran attempts to exceed the limit or divert any of the heavy water for illicit production of plutonium. So, no.
…
QUESTION: But aren’t you concerned that some of this “under 10 million” will fund terrorist activities in the future?

MS TRUDEAU: So we’ve talked about this quite extensively from this podium, as well as elsewhere, Lucas. No one’s blind to Iran’s unhelpful activities in the region. On this, what we can say is this was a commercial transaction, it was allowable, it fills a need here in the United States.