Poll 2: Iranian Views of the US

One year after the nuclear deal was reached, Iranians’ views of the United States have not improved, according to a new poll by the University of Maryland. As of June 2016, 73 percent of Iranians had a negative view of the United States. About the same percentage thought Washington was actively preventing other countries from strengthening economic ties to Iran.

Support for bilateral cooperation with the United States on a variety of issues was lower than in the past. “For the first time since the summer of 2014, a majority (54 percent) of Iranians now oppose cooperation with the United States against ISIS in Iraq, compared with a majority (59 percent) of Iranians who approved of such collaborations shortly after the nuclear deal was reached” in July 2015, according to the poll report.

The telephone poll of 1,007 Iranians was conducted June 17–27, 2016, for Center for International and Security Studies at Maryland by IranPoll.com. The following is a rundown of key results on the United States.

What is your view of the United States?

How about the U.S. government? Is it:

How about the American people?

Do you expect that in the next three years, Iran's relationship with the United States will in general: 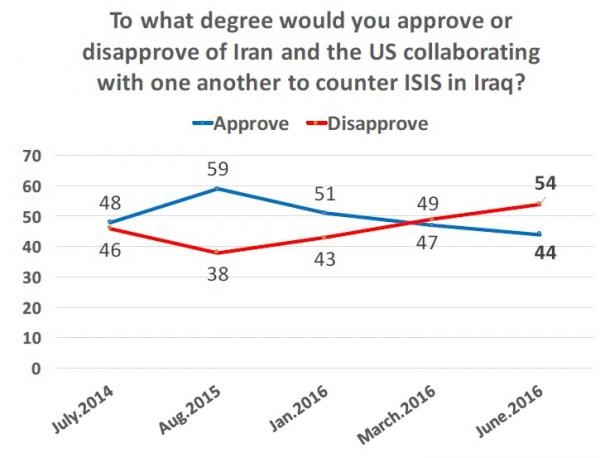 To what degree would you support or oppose Iran and the United States cooperating in each of the fields that I am going to be reading to you?

To have greater cultural, educational, and sporting exchanges

To have greater trade

Do you think that since the JCPOA, Iran’s relations with the US have in general: