In the buildup to the parliamentary election, Iran’s top leaders appear to have differing views as to who should be allowed to run. In a January 21 speech to election officials, Rouhani challenged the Guardian Council’s disqualification of the majority of candidates who registered for the February 26 election. He seemed to compare reformists to Iran’s recognized religious minorities —Jews, Christians and Zoroastrians —who are granted proportional representation in parliament. “They are 10,000, 20,000,” he said. “Yet there is a faction in this country with seven or 10 million,” he added, which was widely seen as a reference to reformists.
Some 12,000 candidates have registered to compete for parliament’s 290 seats. But the Guardian Council, which is in charge of vetting candidates’ qualifications, has rejected some 60 percent of the would-be candidates. And Iranian media outlets have reported that the Guardian Council has disqualified the majority of Rouhani’s supporters and reformists. Reformist leader Hossein Marashi told Shargh Daily that only 30 of more than 3,000 reformist candidates who registered were approved to run.

Supreme Leader Ayatollah Ali Khamenei said in January that only candidates who totally support Iran’s system of government should be allowed to run, which was widely interpreted as a statement backing conservative factions. Yet he said that he wants all Iranians to vote, even those who don’t accept Iran’s system. On January 4, Khamenei warned that Iranians who oppose the system, “agents of penetration,” could eat away at it from the inside like termites if they manage to enter parliament or other elected bodies. The following are excerpted remarks by Rouhani and Khamenei on the vetting of parliamentary candidates.

Elections is a national contest among all Iranians. If they come to scene strongly, filling ballot boxes w/ their will, Iran will be proud.

In US who calls itself democracy symbol, anyone with least socialist approaches was rejected,now they criticize us for Guardian Council! 2/2

“Even in America, which claims it is the land of freedom and some people naively accept that, during the Cold War those with slightest socialist leaning would have been marginalized.”
—Jan. 20, 2016, in a meeting with election officials 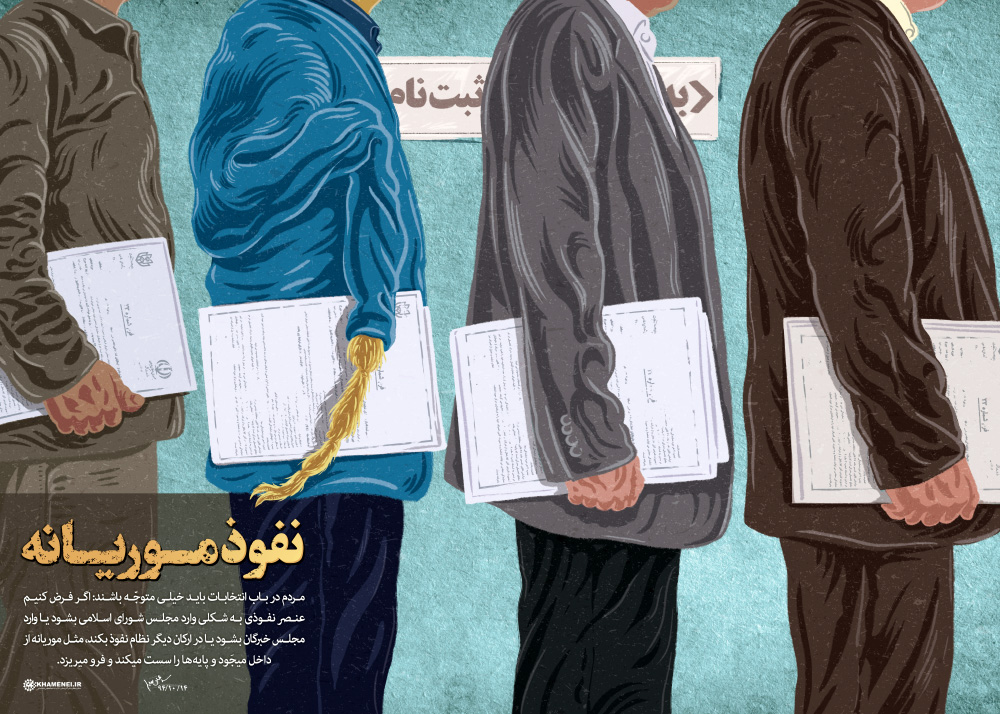 Another issue is the issue of penetration. We brought up the issue of penetration during and after JCPOA [Joint Comprehensive Plan of Action]. This is a very astonishing and important issue. Those who have access to information about different matters know very well what a snare they have laid or want to lay in order to penetrate the stronghold of the Iranian nation’s willpower, thoughts and decisions with all kinds of measures, policies and plots. This is an ongoing situation. The people should pay careful attention to this matter when it comes to elections. If the agents of penetration somehow manage to enter the Islamic Consultative Majlis, the Assembly of Experts or the other foundations of the Islamic Republic, they will weaken the bases of the system and will eat them from the inside like termites.
—Jan. 4, 2016, in a meeting with prayer leaders
President Hassan Rouhani
“The primary reports I've received [about disqualifications] did not make me happy at all.”
“I will use all my power to protect the rights of candidates."
—Jan. 18, 2016, in a news conference
“During these elections, we have to show and prove impartiality, non-interference, the essence of constitution, security, competition, Supreme Leader’s guidelines and full implementation of his orders as to hold the elections with full participation of all.”
“As the Majles (parliament) is a house for people, not for a certain faction, the government also supports no specific faction, party or candidate, therefore as the world situation changed, we should let the best candidates enter the Majles.”
“If there is one faction and the other is not there, they don't need the February 26 elections, they go to the parliament.”
“They [religious minorities including Jews, Christians and Zoroastrians] are 10,000, 20,000… Yet there is a faction in this country with seven or 10 million.”
“We hope all factions will be able to send their representatives to the parliament.”
“No official without the vote of the people would be legitimate. Executors and observers should pay attention that the law is respected.”
“As the supreme leader of the Islamic Revolution indicated and ordered all to act according to the essence of the constitution, not the essence of a specific political taste, so I urgently asked the Interior and Intelligence Ministers to diligently cooperate and consult with the electoral supervisory Guardian Council in this regard.”
—Jan. 21, 2016, in an address to election officials
Photo credits: Khamenei.ir, President.ir