Daryl G. Kimball
What is Implementation Day? And what does it mean?
The Joint Comprehensive Plan of Action (JCPOA) concluded by Iran and the world’s six major powers — Britain, China, France, Germany, Russia and the United States — plus the European Union on July 14, 2015 requires Iran to take four major steps that will set back its capacity to produce material for nuclear weapons. Before the JCPOA is formally implemented, Iran must:

These steps will increase Iran’s potential “breakout” timeframe – the amount of time it would take to amass enough bomb-grade material for one weapon – from as little as two months (as was the case before the JCPOA was brokered) to more than a year.
Implementation Day will be triggered when the IAEA certifies that Iran has taken the key steps to restrict its nuclear program and has put in place the increased monitoring capabilities mandated by the JCPOA. Key U.S., E.U., and U.N. nuclear-related sanctions against Iran are to be lifted. After that point, the JCPOA will set additional limits and requirements on Iran’s nuclear program.
What steps did Iran have to take to get to this juncture?
To reach the implementation stage, Iran had to verifiably dismantle and store under IAEA seal more than 13,000 centrifuge machines, including its more advanced centrifuges, leaving Tehran with 6,104 first-generation IR-1 machines, of which 5,104 will be allowed to continue to enrich uranium to low levels (3.67 percent U-235) for energy production purposes. The remaining 1,044 centrifuges will be at the Fordo site, which can only be used for medical isotope production.
Iran’s uranium enrichment will be capped at these levels for 10 years, after which the two sides have agreed that Iran’s uranium enrichment capacity shall remain constant for several years. But advanced machines can be slowly phased in to replace the IR-1s.
The JCPOA also required Iran to ship to Russia over 8.5 tons of all forms of low enriched uranium material, leaving Iran with a working stockpile of just 300 kilograms of uranium enriched to no more than 3.67 percent U-235— far less than what is necessary to enrich further for one bomb. The stockpile cap and prohibition on enrichment above 3.67 percent will remain in place for the next 15 years.

Additionally, Iran was required to remove the core of the Arak reactor and fill the channels with cement, rendering it inoperable. The world’s six major powers, also known as the EU3+3 or P5+1, worked with Iran on a new design, which will optimize medical isotope production. The changes will also significantly lower the output of weapons-grade plutonium to less than one kilogram per year—far below the amount necessary for one weapon. China agreed to provide technical support to modify the reactor, and the United States reviewed and approved the modified design.
Implementation of the JCPOA also required the IAEA’s monitoring and inspections authority to be strengthened, in addition to the standard IAEA monitoring already in place. This includes the implementation of Iran’s Additional Protocol agreement with the IAEA, which gives the U.N. nuclear watchdog short-notice access to virtually any site the agency believes may be involved in illicit nuclear activities, even military facilities. Iran was also required to implement Code 3.1 of Iran’s existing comprehensive safeguards agreement, which requires earlier notification of nuclear activities and facility design changes.
In addition, Iran had to begin allowing continuous IAEA monitoring of enrichment activities at the Natanz and the Fordo facilities and centrifuge production. The monitoring will continue for 20 years. Iran also had to allow the IAEA to begin continuous monitoring of all of its uranium mines and mills, a requirement that will last for 25 years.
Together, these measures ensure that if Iran were to pursue a covert nuclear weapons program, it would need to replicate its entire nuclear supply chain to get the necessary fissile material while evading IAEA monitoring and detection by foreign intelligence. While no single element of the monitoring regime offers a 100 percent guarantee against cheating, this multilayered approach provides high confidence that Iran cannot deviate from the restrictions under the deal without prompt detection. 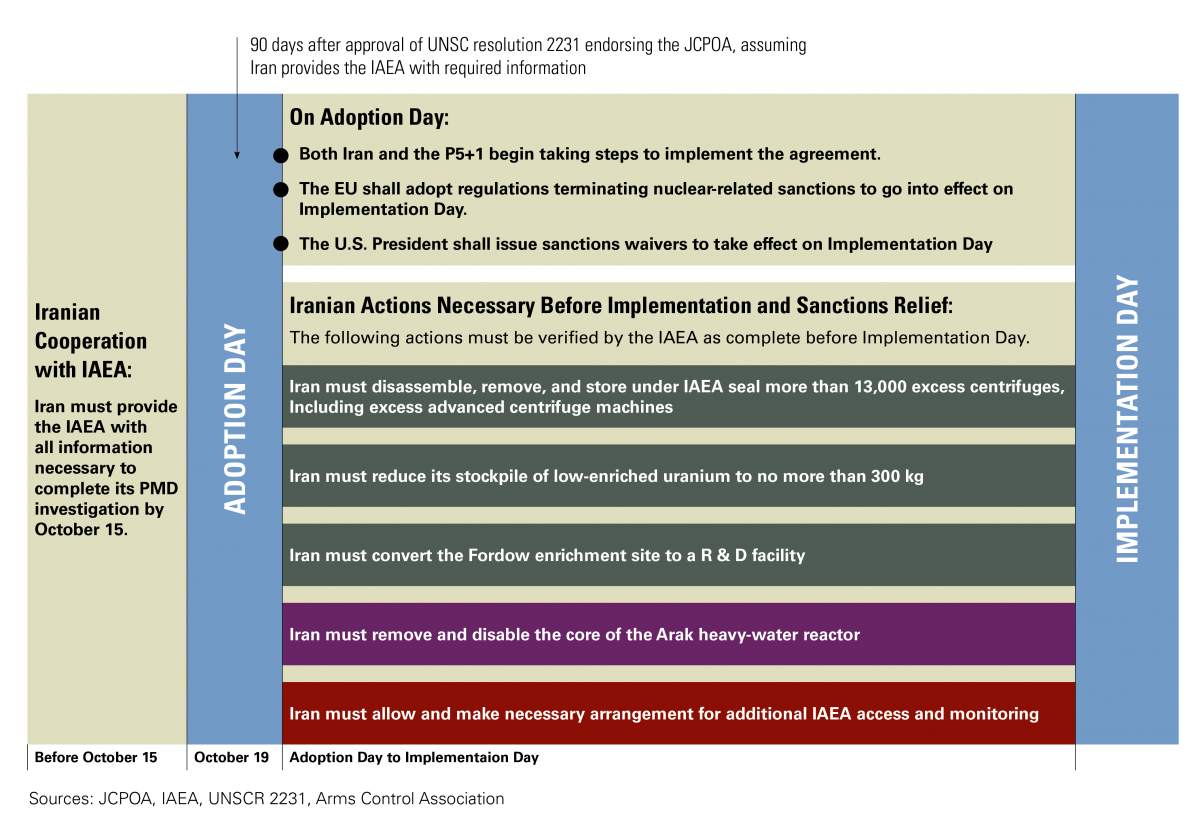 What steps are the United States, the European Union, and the United Nations required to take now?
When the IAEA verifies that Iran has met all of the requirements necessary to trigger the implementation phase, the United States, the European Union, and the U.N. Security Council will start to unravel the nuclear-related sanctions regime. These steps include the following:
Pre-2015 U.N. Security Council sanctions will be subject to prompt re-imposition in the event of noncompliance for 10 years. The United States and European Union can also choose to reinstate sanctions in the event of noncompliance.
What are Iran’s primary obligations under the nuclear deal after implementation?
Following Implementation Day, Iran will be subject to further, multi-year restrictions to ensure it cannot reconstitute its capacity to produce bomb-grade nuclear material to pre-JCPOA levels for well over a decade, and perhaps longer.
These restrictions include: 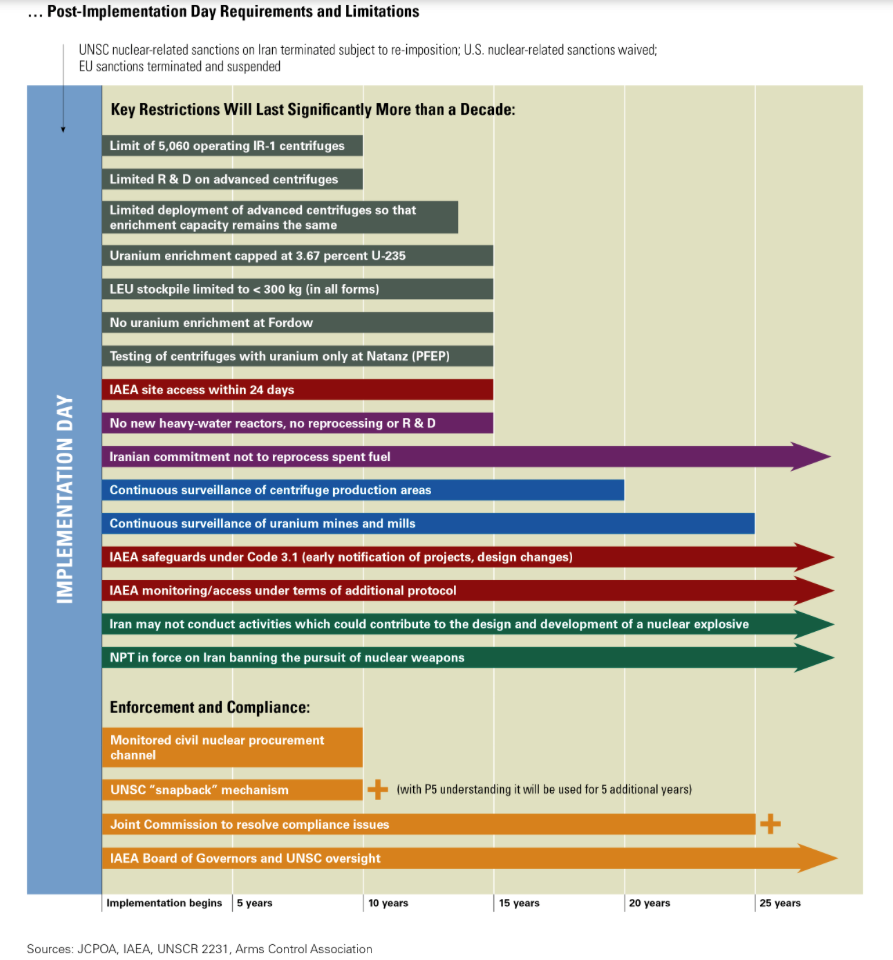 What are the next milestones, and when might they occur?
The IAEA will report on a quarterly basis on Iran’s program to ensure compliance. The first report following implementation, due this spring, will likely deliver an enormously more detailed set of data on Iran’s program. Iran will begin work to build the modified Arak reactor later this year. A special procurement channel to facilitate declared, peaceful Iranian nuclear activities and head off access to prohibited nuclear technology will be put into place this spring. The lifting of nuclear-related sanctions relief may open the way to greater trade and foreign investment in Iran by mid- to late-2016. No later than eight years after Implementation Day, Iran must also ratify its additional protocol agreement with the IAEA. Sometime after that point, the IAEA may deliver its broader conclusion about whether Iran’s nuclear program is exclusively peaceful – or not.
What are the hurdles or obstacles ahead?
Undoubtedly, there will be disputes regarding implementation of the JCPOA by both sides. To deal with these issues, the JCPOA established a Joint Commission comprised of eight members, one from each of the six countries of the EU3+3, plus the European Union, and Iran. In addition to overseeing the procurement channel and disputes over IAEA access to suspect sites, the Joint Commission will serve as a dispute resolution body if there are concerns about material breaches of the agreement by either side. It also will approve or delay certain activities that may not comply with the terms of the agreement. Each dispute will test the commitment of each side to meeting and enforcing the terms of the agreement.
If the U.S. Congress votes to reauthorize the Iran Sanctions Act – which would give the president authority to more quickly re-impose nuclear-related U.S. sanctions - this could trigger a reaction from Iran and an escalating series of retaliatory measures by each side that could undermine the agreement.
The JCPOA promises to remove the threat of Iranian nuclear weapons from the Middle East equation, but its success requires continuing focus and commitment by both sides.

Daryl G. Kimball is the Executive Director of the Arms Control Association.

Online news media are welcome to republish original blog postings from this website in full, with a citation and link back to The Iran Primer website (www.iranprimer.com) as the original source. Any edits must be authorized by the author. Permission to reprint excerpts from The Iran Primer book should be directed to permissions@usip.org.