Garrett Nada and Katayoun Kishi
For Iranian leaders, voter turnout is critical to proving the legitimacy and public support for the Islamic Republic. Voting is considered a national duty because it represents a commitment to the 1979 revolution and its values. On February 26, Iranians will head to the polls to vote for Parliament and the Assembly of Experts. The elections have the potential to change the political balance of power.

Given the stakes, leaders from across Iran’s political spectrum have called on the public to vote. On February 8, Supreme Leader Ayatollah Ali Khamenei said Iranians have a “duty to cast their ballots,” and that elections are a “revitalization for the nation and a new pledge of allegiance to the goals of the Revolution.” He compared mass participation in the elections to “fresh blood” that will “guarantee the dignity and might of Iran and the establishment.” On February 3, Parliamentary Speaker Ali Larijani said a high turnout would boost Iran’s international standing.
Reformists and centrists who support President Hassan Rouhani have formed an alliance to rally voters to challenge hardliners and conservatives, who are divided into rival factions. On February 11, President Hasan Rouhani asked political factions to put aside their differences and emphasized the need for consensus. “Don’t turn your backs on the ballot boxes,” he said. Former President Akbar Hashemi Rafsanjani has also called for a high turnout. He said that Iranians who are moderate will “prove to the world that political extremism and efforts to downgrade other nations is the trait of a limited minority.”
On February 8, former reformist President Mohammad Khatami said that people should vote because “heated elections” are in their interests, even though “capable” and “deserving figures” had been disqualified. “Experience has shown that the more people participate in elections, and the more that people with diverse opinions participate with passion and excitement, the closer the results of the election will be to the will of the people, to the benefit of the country, and to the desire of the people,” Khatami said in the video embedded below, which was distributed widely online and over social media. He added that a high turnout “can ruin all the plans of external and internal enemies of the revolution.”
Voter turnout has been fairly consistent in the nine parliamentary elections held since Islamic Republic’s inception. Turnout has hovered between about 50 and 70 percent in each election. A recent poll by the Center for International and Security Studies at Maryland found 67 percent of respondents said they would be very likely to vote in the upcoming elections, and an additional 20 percent said they would be somewhat likely to vote. Only 12 percent said they would be not very likely or not likely at all to vote. Based on these responses, Iran could see record amounts of voter turnout on Feb. 26, 2016.
Elsewhere in the region, voter turnout is also seen as a reflection of a government’s legitimacy by the public. Iran’s turnout in its most recent parliamentary election was lower than that of Turkey for both registered and all eligible voters. Iran’s turnout among registered voters was close to that of Tunisia. But Iran had a higher overall turnout among eligible votes, 62 percent compared to 45 percent. The relationship was reversed with Iraq. Iran had a slightly higher turnout among registered voters while Iraq had a higher turnout among eligible voters.
Iran’s turnouts for both registered and eligible voters, however, were higher than turnouts for Jordan, Syria, Morocco, Algeria, Libya and Egypt in their most recent parliamentary elections. 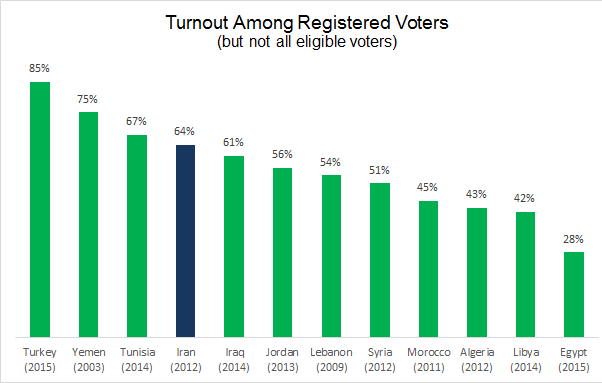 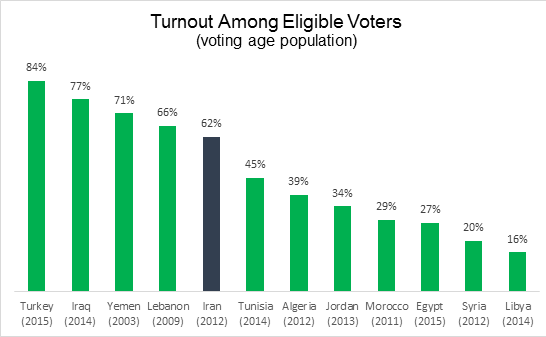 *Data gathered by the International Institute for Democracy and Electoral Assistance from various sources.
Garrett Nada is the assistant editor of The Iran Primer, and Katayoun Kishi is a research assistant at the U.S. Institute of Peace.