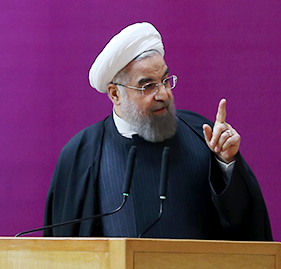 “The government sees it as a duty to provide the groundwork for women’s capabilities to demonstrate and let them to step on the path of perfection and be able to demonstrate their talents; this way, the gap and disproportion between men and women can be replaced with moderation.”

“Women being alongside men in science and knowledge, but witnessing a disproportion [absence] in economy and politics, is not acceptable.”

“Unfortunately, some people have radical ideas; at times, they even think radically in the name of religion and explain religion radically.”

“Moderation is not a slogan, but rather the path of thinking and discourse and today we should revitalise this discourse.”
“A major proportion of today’s problems in the world stems from fanaticism and extremism and some view the world radically. It is true that we should not fully trust everyone and strangers, but anyway, anything has got a point of moderation. Unfortunately, some do not know any way other than radicalism.”
“I receive a lot of messages and letters, asking me why I do not make a move in the current conditions. I am aware of all issues and understand that what many of them wanted are not there for them to see, but we should look at the lofty goal we have; and tactfulness means that we should have foresight and do not forget the main goal and the [expected] result.”
“Of course, I have not remained silent wherever I saw a problem and I will pay the price personally; but it is very important that we should pay attention to the end and the result with tactfulness, patience, and forbearance and go to the ballot box unitedly.”
“I feel that if we do not think about some issues and processes, the society may face despair and do not attend the elections.”
“Although sometimes choosing become difficult, everybody should go to the ballot box for the February 25 elections. Women also have a great responsibility in this field and should play their significant and effective role just like all other fields.”
“At the time when people decorated the streets with their presence for the victory of the Islamic movement, women had significant and active roles in all of those fields.”
“Some people were expressing doubts about women sitting at the same table as men to present news, and also their presence in the elections, but today we have passed through all of these stages.”
“How some viewed women is not particular of Iran, and we are witnessing the same procedures in the world’s history in a way that a few centuries back, women and girls were prohibited from entering universities in UK, and in the twentieth century, in most of the European countries women did not have the right to vote.”
“Fortunately in the field of economy, women’s role is becoming stronger and the existing gaps can be filled.”
“In political and management fields, we are still distant from a desirable point and we should make progress in this path by planning and joining hands.”
“We do not accept feminist ideas; and we do not accept ossification either.”

Click here for information on the women’s movement in Iran.