In June and July, Iran expanded its economic outreach to the world, signing deals with foreign oil and automotive companies. In June, IranAir even reached a tentative $17.6 billion deal with Boeing, the world’s largest aircraft manufacturer, to purchase passenger planes. Iranian officials predicted that GDP could grow by as much as five percent this year.

Despite positive economic trends, some Iranian officials claimed – as they have in previous months – that the United States has not fully honored its commitments under the nuclear deal, which reached its one-year anniversary on July 14. Foreign Minister Mohammad Javad Zarif said that sanctions have only been lifted “on paper.” U.S. officials maintained that remaining restrictions are related to Iran’s terrorism and human rights abuses.

Iran’s economic growth, however, has also been stymied by other factors. Although oil production and exports have rapidly increased since the deal was implemented, output began to level off in June and July, and oil prices remained low. Corruption, a lack of transparency, and other issues have made Iran’s business environment challenging for investors. Foreign companies also risk incurring penalties from remaining U.S. sanctions.

The following is a rundown of economic developments in June and July.

In June, Interior Minister Abdolreza Rahmani Fazli predicted that Iran’s economic growth may only reach between 1.5 and three percent in 2016. “With that sort of growth, unemployment and inflation will double in the short term. We need foreign investment,” he said.

Minister for Economic Affairs Ali Tayebnia, however, was more optimistic. On July 20, he predicted that Iran’s economy could grow by up to five percent this year. He attributed the projected growth to reforms in Iran’s financial system and improvements in financing for economic activities. 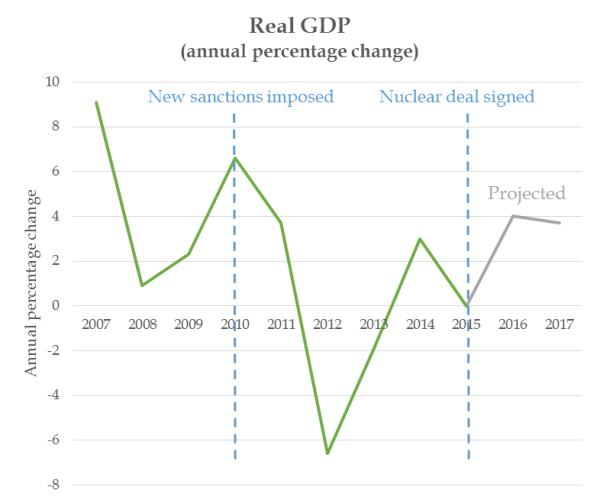 In June and July, the White House reportedly considered taking steps to facilitate businesses’ access to the Iranian market, in hopes of cementing the nuclear deal before another administration takes office in January. U.S. officials considered whether to support Iran's efforts to join the World Trade Organization or even grant Iran limited access to the U.S. dollar.

But as in previous months, U.S. and Iranian officials disagreed on whether the United States was doing enough to facilitate trade and investment in Iran. On June 12, Iranian Foreign Minister Mohammad Javad Zarif said that “The reason that certain unjust U.S. sanctions against Iran are still in place is our anti-hegemonic policies.” Two days later, he accused the United States of removing sanctions “on paper” but not addressing the “psychological remnants” of past restrictions.

U.S. State Department spokesman John Kirby responded by saying that “What might help lift some of the psychological remnants…would be Iran’s ceasing the destabilizing activities that they continue to carry out,” citing Iran’s support for Hezbollah and other armed groups. Iranian officials rejected the accusations. “The Americans are clearly among the blatant examples of state terrorism and supporters of terrorist measures and extremist groups in the world,” Chairman of the Iranian Parliament’s Committee on National Security and Foreign Policy Alaeddin Boroujerdi said on July 3. “They, however, have an unreal view of the Islamic Republic.”

Foreign direct investment in Iran could total $8 billion by March 2017, according to Seyed Hossein Salimi of the Iranian National Committee of the International Chamber of Commerce. “Currently, the number of foreigners, who are eager to negotiate with Iran and seal contracts, has multiplied,” he said in June. In 2015, foreign direct investment only reached around $2 billion.

On June 20, Expediency Council Chairman Hashemi Rafsanjani attributed the rise in foreign investment to the implementation of the nuclear deal. “From the conditions where all countries were competing with each other to impose sanctions and approve resolutions against Iran, we have reached a situation that they are welcoming investment in Iran,” he said.

Iran has seen a spike in global investment since sanctions were lifted in January. South Korean steel producer Pohang Iron and Steel has been the largest investor this year, planning to invest $1.6 billion in a steel mill by 2017. But Iran needs much more investment – between $30 billion and $50 billion annually – to reach its target economic growth rate of eight percent, according to President Hassan Rouhani.

Iran’s oil production rebounded quickly after sanctions were lifted in January, jumping from 2.9 million barrels per day in January to 3.6 million barrels per day by June. Oil exports nearly doubled during the same period. But exports began slowing in June and July, dropping 20 percent in June compared to May. Although Iran still exports much of its oil to Asia, imports by European buyers such as Italy, Greece, and Spain have not yet reached pre-sanctions levels.

Low oil prices have also limited Iran’s revenue from production increases. In January, oil prices fell below $30 a barrel for the first time in 12 years. Prices have rebounded slightly since then, reaching $46 a barrel in June 2016. On June 18, Zanganeh reiterated that Iran will continue trying to raise oil output despite low prices. “Even if the oil price hits 20 dollars [per barrel], the plan for an output rise to the level of pre-sanctions periods will continue,” he said. Iran hopes to increase production from 3.5 million barrels per day to 4.8 million barrels per day by 2021, but it needs at least $70 billion in foreign capital to reach that goal.

Iran hopes to attract foreign investors by offering more favorable contract terms. On June 27, Zanganeh announced that the Iran Petroleum Contract (IPC) is expected to be finalized by the end of the summer. Unlike the “buy-back” contracts unpopular with foreign firms, the IPC allows companies to participate in all the stages of an oil or gas field’s lifecycle. Italy’s Eni and France’s Total have said they will not sign deals under the buy-back arrangement, arguing that they were not profitable.

The IPC was originally meant to be unveiled in February. But finalizing new contract terms has faced roadblocks, as Iran’s hardliners oppose the IPC and support the buy-back system. On July 3, Supreme Leader Ayatollah Ali Khamenei said that “These contracts will not be signed unless the necessary reforms are implemented in the framework of national interests.”

In mid-June, Peugeot-Citroen signed a $450 million joint venture with Iranian automaker Iran Khodro to produce 200,000 cars per year by 2018. According to Industry Minister Mohammad Reza Nematzadeh, Iran is in talks to strike similar deals with other European automakers. The auto industry is Iran’s largest non-oil sector, and it accounts for around 10 percent of gross domestic product.

On June 15, U.S. aircraft manufacturer Boeing signed a preliminary $17.6 billion deal to sell IranAir 80 aircraft between 2017 and 2025. Boeing received special permission from the U.S. Treasury to carry out the negotiations. But American companies are still generally prohibited from trading with Iran because of sanctions for human rights violations, support of terrorism, and ballistic missile programs.

Additionally, in July, Iran Air reportedly began discussing plans to purchase 80 passenger planes from Japanese firm Mitsubishi. Iran needs between 400 and 500 new planes over the next 10 years to update its aging aircraft.

The European Commission began allowing Iranian planes to fly in European airspace in mid-June. Iranian planes had been largely banned since 2010 over accidents resulting from mechanical failures.

In June and July, Iranian officials highlighted the unemployment rate, particularly among youth. On June 14, Rouhani said that “It’s a shame for the administration that the Iranian educated youth are unemployed.” Earlier in June, Khamenei said that “The shame that burdens this humble person’s heart, over unemployed youth going home empty-handed, is no less than their burden of shame.”

In a June 14 cabinet meeting, Rouhani said that the government has created about 1.4 million new jobs over the past three years. But around 3.5 million Iranians are unemployed, around 11 percent of the workforce.

Iran is exploring the possibility of exporting electricity to Europe, according to Deputy Energy Minister for planning and economic affairs Alireza Daemi on June 15. Officials hope to establish Iran as a regional energy hub.

A few weeks later, in mid-July, a delegation of E.U. officials visited Iran to explore cooperation in energy, trade, and finance. The delegation met with Iranian officials in the Ministry of Economy and Finance, the Central Bank, the Ministry of Industry, Mines, and Trade, and other government agencies. Trade between Iran and the European Union is expected to reach $8 billion annually in the next few years, according to the U.K Foreign Office.

Iran has already negotiated several long-term agreements with several European energy companies, according to Executive Director for International Affairs at the National Iranian Oil Company (NIOC) Seyyed Mohsen Ghamsari. “So far, agreements worth 600,000 to 700,000 barrels have been signed and 80 percent of the deals have become operational,” he said on June 12. He added that deals have been signed with Italy’s Saras SpA and Eni, Spain’s Repsol, Greece’s Hellenic Petroleum SA, France’s Total, Switzerland’s Vitol Group, and Russia’s Lukoil.

In mid-June, Iran paid off its remaining export-credit debt to Germany, facilitating the resumption of trade between the two nations. While under sanctions, Iran had withheld payments on its credit obligations to Germany. “This is a further important step to revive our economic relations,” German economic minister Sigmar Gabriel said on June 20.

Turkey is eager to improve trade ties with Iran and facilitate its integration into global markets, according to Foreign Economic Relations Board of Turkey Chairman Ömer Cihad Vardan. "As a country that has shown such a presence in Iran following the removal of sanctions, Turkey's exports to neighboring Iran will [considerably] increase and we will further approach our target of $30 billion in exports in a short time in the new period thanks to our old business relations and geographical proximity,” he said on June 17.

Iran has increased gas exports to Turkey in the past few months. Iran exported 1.8 billion cubic meters of natural gas to Turkey between March and June, an 11 percent increase compared to the same period last year.

Russian banks, including Gazprombank, are beginning activities in Iran, according to Director General for International Affairs at the Central Bank of Iran Hossein Yaghoubi Miab. “Now we do not have issues relating to sanctions, so we look forward to developing interbank relations,” he said in June.

Additionally, in late June, head of the Trade Promotion Organization of Iran Afkhami Rad said that an Iranian commercial attaché had been stationed in Moscow to develop stronger economic ties between the two countries. He also mentioned the beginning of direct flights between Iran and Astrakhan, in southern Russia.