Allies and supporters of President Hassan Rouhani made gains in the Parliamentary runoff election on April 29. They will form the largest faction in Parliament, but not a majority.  In 55 constituencies, 136 candidates competed for 68  seats that were undecided in the first round, on February 26, where a candidate did not meet the threshold of 25 percent. Rouhani’s supporters— a loose group of reformists, centrists and moderate conservatives— now hold roughly 41 percent of the 290 seats.
Rouhani welcomed the election results in a speech marking May Day. “People chose the best people in the election, and we are happy that the next Majles (Parliament) will be more coordinated with the government,” he said. Some 59 percent of eligible voters went to the polls.

The new Parliament will have fewer clerics than at any time since the founding of the Islamic Republic. Since the first Parliament in 1980, the proportion of clerics in the legislative body has steadily decreased, from more than half of lawmakers in 1980, to nine percent in 2012. Some 27 clerics held seats in the outgoing Parliament, compared with just 16 who were elected this round, according to Agence France-Presse. Three are considered reformists and the rest are more conservative. For the first time, women will outnumber clerics. 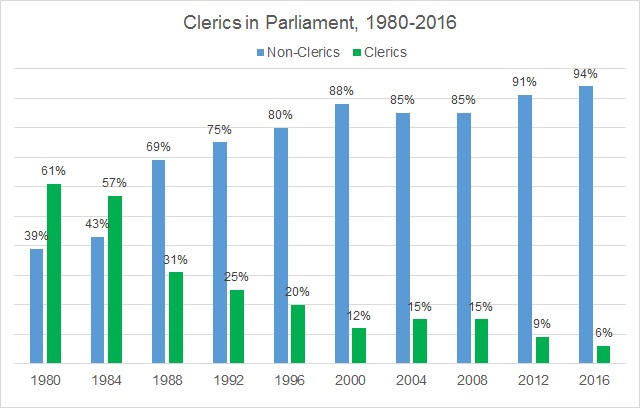 Women won a record number of seats. The new Parliament will have 17 women, eight more than in the outgoing Parliament and three more than the previous high in 1996, during the era of President Akbar Hashemi Rafsanjani. They are all reformists or independents, another departure from past parliaments. In the previous parliament, the female Members were virtually all conservative.

Rouhani highlighted the increase in female representation in his May Day speech. “This is a record and we are happy that our dear women are taking part in all stages, especially in politics,” Rouhani said. 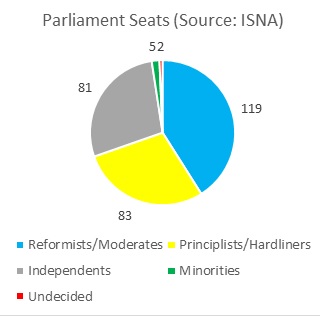 Media and monitoring groups, however, differed over the distribution of seats, in part, due to the fluid nature of Iranian politics. Iran’s system does not have formal parties. Candidates run either as independents or on lists with others. In this election, some candidates ran on multiple lists, so their affiliations are not clearly defined. And some newcomers’ leanings are unknown. The chart above is from the Islamic Student News Agency:
Independents may play a decisive role in the new Parliament because neither the president’s supporters nor the hardliners have enough seats to push legislation through on their own. Hardliners won 29 percent of the seats. And independents won 28 percent of seats. The new balance of power may help Rouhani push forward long-stalled promises of reform opposed by hardliners, who have dominated the last three parliaments, since 2004.

Gains by Rouhani’s supporters have raised the possibility that Mohammad Reza Aref, a leading reformer, may challenge the current Speaker of Parliament, Ali Larijani. Larijani is a conservative who ran from the holy city of Qom. He is considered a principlist but chose not to join the main list of hardliners for the election. “I feel our friends in the [conservative coalition] have not provided the necessary mechanisms for the creation of unity… Therefore we seek to act independently,” he said. He won the backing of Qassem Soleimani, the commander of Iran’s elite Qods Force, who cited Larijani’s long support of “revolutionary movements.” Larijani was largely supportive of the nuclear deal between Iran and the world’s six major powers.
Aref could be a formidable contender for the speakership. A former presidential candidate and a vice president under former President Mohammad Khatami, he garnered 1.6 million votes for a parliamentary seat from Tehran, more than any other candidate. He headed the “List of Hope,” which included reformists and centrists who support Rouhani. The list associated itself with the success of the nuclear deal, the lifting of international sanctions, and normalizing political and economic relations with the outside world. The slate also supported greater personal and political freedoms. If Aref were to dislodge Larijani, he could potentially shift the direction and priorities of the legislature. The new Parliament is scheduled to convene on May 27.

Two seats are still undecided. One is for Isfahan, which was initially won by a female reformist candidate, Minoo Khaleghi. She was disqualified by the Guardian Council one month after the election. The Council did not give an official reason for her disqualification, although some have speculated that a photo of her shaking hands with a man and not wearing a hijab might have triggered the decision. It has not yet been announced how her seat will be filled.
The other unfilled seat is for the rural town of Mamasani in southern Fars province. During voting, shooting broke out between supporters of different candidates, and four people were wounded.
Garrett Nada is the assistant editor of The Iran Primer. Katayoun Kishi, a research assistant at the U.S. Institute of Peace, also contributed to this article.