Part I: Are Iran’s Missiles a Threat?

Michael Elleman
Iran test-fired several ballistic missiles in March 2016 and one in October 2015. Why? What is Iran’s goal? Is there any significance to the timing?
Ballistic missiles have been a key pillar of Iran’s overall defense and deterrence strategy since its 1980-1988 war with Iraq. For Tehran, missiles provide the capacity to strike targets throughout the region, something its air forces would struggle to achieve. But while ballistic missiles serve the deterrence mission by threatening their use before or during a military conflict, they are often featured in Iran’s rhetoric when seeking to intimidate or coerce its regional rivals. As a consequence, ballistic missiles are heralded by the leadership, prominently displayed in military parades, and featured during military exercises. Test launches are often broadcast on state-owned television.
It is therefore no surprise that Iran unveiled its newest missile, the Emad, in October 2015, and fired a few Shahab-3 missiles shortly after the Great Prophet war games in March 2016. It also showcased on state-television a network of tunnels used to protect its missile forces. The Shahab-3 missiles and the tunnels have been around for more than a decade, so Iran revealed no new capabilities in 2016.

The Emad, tested in 2015, is a modified version of the medium-range Ghadr missile. The modification includes a new nosecone, outfitted with four-small winglets at the base of the warhead. Presumably, the winglets are designed to steer the warhead during re-entry into the atmosphere with the purpose of bettering accuracy. Mastering the technologies needed to make the Emad missile capable of delivering a warhead to a specified target with precision will take many years, possibly 10 or more. Whether Iran has ambitious plans to perfect this capability, or the emergence of a missile seemingly designed for conventional missions, not nuclear ones, is unclear, though it seems likely both objectives serve Tehran’s needs.
It is interesting to note that the Emad was the first medium-range missile Iran has publically tested since 2013. Indeed, Iran has launched, on average, between two and three medium-range missiles every year since 2006, except in 2014, when no missiles were tested. Tehran may have opted to not undertake potentially provocative action during the nuclear negotiations, which would explain the hiatus in testing. The resumption of flight tests is likely to represent a return to past practices.
What are the capabilities and range of these missiles?
Iran maintains the largest and most wide-ranging ballistic missile arsenal in the region.  With roughly 200-300 Shahab-1 and -2 missiles (Scud-B and –C, respectively), Tehran can range targets as far as 500 km (310 miles). This places all of Kuwait, Bahrain, Qatar, the United Arab Emirates, and oil-rich Eastern Province of Saudi Arabia within reach. Iran has converted some of its Shahab-2 missiles into Qiam missiles. The Qiam uses a detachable warhead, which reduces its vulnerability to the missile defenses deployed in the region.
Iran also possesses up to 100 Shahab-3 and Ghadr missiles, both of which are derived the Nodongs imported from North Korea. Dissatisfied with the performance of the Shahab-3/Nodong missiles that were limited to a range of about 1,000 km (620 miles), Iranian engineers replaced the steel airframe with a lighter-weight, aluminum-alloy structure, lengthened the propellant tanks, reduced the warhead mass and rearranged some internal components to extend the missile’s reach to 1,600 km (just under 1,000 miles). The modified version is called Ghadr.

Shahab-3 by JamesMartinCNS on Sketchfab

The Shahab and Ghadr missiles are all liquid-fueled systems. Iran is developing a two-stage, medium-range missile based on solid propellant. The Sajjil-2 has an estimated range of 2,000 km (1,240 miles), though it has yet to reach operational status. The Sajjil-2 has not be tested since 2011, and appears to have encountered technical difficulties, though it is unclear precisely what is troubling the development efforts.
These Shahab, Qiam, Ghadr and Sajjil-2 systems lack the accuracy needed to be militarily decisive when armed with conventional warheads. They could sow terror and potentially weaken the resolve of states in the region if used against cities and critical infrastructure. These missiles could also disrupt, though not halt operations at key military facilities, such as airfields. Incorporating satellite-guidance systems (e.g. Global Positioning Satellite, or GPS, receivers) would improve accuracy, but by now more than about 25 percent, not enough to enhance the military effectiveness of the missiles.
Iran fields a family of increasingly accurate, heavy-artillery rockets with ranges of up to 250-300 km (155-190 miles). The Fateh-110, for example, flies on a trajectory that remains within the earth’s atmosphere during its entire flight. Small winglets mounted just below the warhead section can thus steer the rocket to its target with greater precision. In principle, the Fateh-110, or its variants, Khalij-Fars and Hormuz, could be accurate enough to strike point-targets reliably. However, in practice, there is little evidence that these rockets have achieved the design goal. This will likely change as Iran continues its efforts to enhance their performance and reliability.
The Fateh-110 range capacity (roughly 210 km, or 160 miles) is not enough to reach across the Gulf, though it is capable of hitting Kuwait or the eastern emirates of the UAE. Consequently, Iran is developing a 300-km (190 mile) version, called Fateh-313. The status of this effort is not known.
The Fateh rockets, like the Shahab, Qiam and Ghadr missiles are all inherently capable of delivering a nuclear payload, if Iran were to acquire an atomic weapon. However, size and weight restrictions would make fitting a nuclear warhead onto the Fateh rockets more challenging. The international community broadly defines “nuclear capable” as any system that can deliver a 500 kg payload to 300 km, which is coincidentally the threshold limits used by the Missile Technology Control Regime, or MTCR.
What countries would be within range? Do these missile tests indicate a greater threat to these countries? 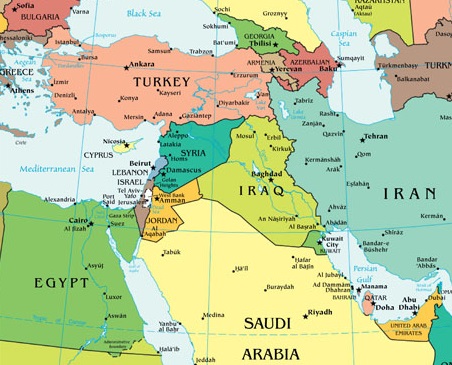 Iran’s missiles are capable of reaching targets throughout the Gulf region, all of the Levant, including Israel, Turkey and portions of the south eastern corridor of Europe. The missiles recently tested, including the Emad, do not extend Iran’s reach beyond the capabilities it possessed a decade ago. Iranian officials are on record insisting that the country has no requirement to build missiles that fly further than 2,000 km (1,240 miles). It remains to be seen if Iran will adhere to these declared limitations.
What defenses do U.S. allies and partners in the region have to counter Iran?
The United States has deployed at least six Patriot PAC-3 missile-defense batteries to the Gulf. Kuwait, Saudi Arabia and the UAE have their own Patriot capabilities, while Qatar is in the process of purchasing Patriot. The UAE has procured two Theater High-Altitude Area Defense (THAAD) units, with the first scheduled to be operational in late 2016.  Qatar, and possibly Saudi Arabia have discussed the purchase of THAAD as well.  The U.S. Navy has Aegis, ballistic-missile defense capable, ships patrolling in the Gulf.
Patriot systems provide defense against short- and medium-range missiles and can protect high-value assets. THAAD, and Aegis, intercept missiles above the atmosphere, and can defend large areas against short-, medium- and intermediate-range missiles.   When operated together, Patriot and THAAD provide two-layers of defense, which substantially enhances defense performance.
The United States and its Gulf partners are working together to integrate the many missile defense components deployed throughout the region. Progress has been slower than desired, though joint efforts to create a Shared Ballistic Missile Early Warning System, as outlined at the U.S.-GCC Summit at Camp David in 2015, are encouraging.
How do Iran’s offensive and defensive capabilities compare with those of its neighbors?
The United States and the Gulf states each have advanced and capable air forces with experience operating together, in both military exercises and during conflict. Iran’s antiquated air force would find it difficult to generate the number of sorties to have much of an impact on U.S. and Gulf state operations. The relative weakness of Iran’s air force severely limits its capacity to strike targets on the Arabian Peninsula, leaving Tehran dependent upon ballistic missiles for extra-territorial attacks.
Iran’s ground-based air defenses, however, are improving. The acquisition of the S-300 air-defense system from Russia will significantly improve Iran’s defensive capabilities.

How has Iran’s missile program evolved in recent years? What is the status of Iran’s intercontinental ballistic missile program?
During the past decade, Iran has focused on improving the accuracy and reliability of its missiles, with little attention to increasing range. The Fateh-110 program, and the recent unveiling of the Emad missile are consistent with this focus on enhancing the military potential of its missile forces. There is no credible evidence to suggest that Iran is developing an intercontinental-ballistic missile, or ICBM.
Iran, however, is developing a satellite-launch capability. The Simorgh rocket, which Iran reportedly tested in April 2016, has a first stage large and powerful enough to serve as a springboard for an ICBM. An ICBM based on Simorgh technology would be very large and cumbersome to deploy as a military system. If Iran were to transform its Simorgh into an ICBM, it would take a handful of years, and would not likely become operational before 2020. No country has ever converted a liquid-fuelled satellite launcher into a long-range missile, primarily because the operational requirements diverge enough to make the transformation impractical.
Michael Elleman, a consulting senior fellow for missile defence at the International Institute for Strategic Studies and a former U.N. weapons inspector, is co-author of “Iran's Ballistic Missile Capabilities: A Net Assessment.”

Click here for recent remarks by U.S. and Iranian officials on the missile tests.