On April 22, Secretary of State John Kerry and Iranian Foreign Minister Mohammad Javad Zarif held a closed-door meeting in New York to discuss disagreements that have emerged during the implementation of the nuclear deal. Iranian officials have alleged that the United States is not fulfilling its obligations under the deal since Iran still faces financial restrictions that limit sanctions relief. Secretary Kerry, however, has emphasized that the United States is not “standing in the way” of companies seeking to do legitimate business in Iran. The following are Kerry’s and Zarif’s remarks to the press before their meeting on April 22. 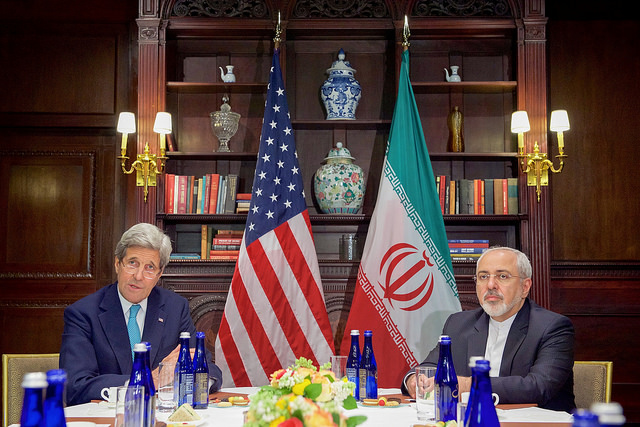 SECRETARY KERRY:  Good afternoon, everybody.  Let me just say a few words, if I can.  I’m very pleased to be meeting with Foreign Minister Zarif today to continue our discussions about the Joint Comprehensive Plan of Action implementation.  We had a very productive meeting earlier in the week.  We exchanged a lot of thoughts.  We talked about some challenges, and so I think we both decided that it was important to do some homework.  And we’ve come back today to follow up on that conversation.

First, I want to say something about one of the issues that we have been discussing.  As President Obama has said, as Secretary Jack Lew has said, and as I have said, and we have said it repeatedly, the United States is not standing in the way and will not stand in the way of business that is permitted with Iran since the JCPOA took effect.  And I want to emphasize we lifted our nuclear-related sanctions, as we committed to do, and there are now opportunities for foreign banks to do business with Iran.
Unfortunately, there seems to be some confusion among some foreign banks, and we want to try to clarify that as much as we can.  Among the nuclear-related sanctions that were lifted were those that prevented Iran from engaging with non-U.S. banks, including getting access to Iran’s restricted funds that were previously held overseas.
Now, we have no objection – I want to make this clear.  We have no objection and we do not stand in the way of foreign banks engaging with Iranian banks and companies, obviously as long as those banks and companies are not on our sanctions list for non-nuclear reasons.  But the nuclear sanctions permitted non-U.S. banks to engage with business activity and companies in Iran, and it allows them to provide access to funds and financing, and it allows Iran, importantly, to have access to its own funds.
We also – I want to say that we understand that banks and businesses have complicated business decisions to make, and they have to make them.  But that is why the State and the Treasury Department have been actively engaged with partner governments and the private sector in order to clarify those sanctions that have been lifted.  And if banks or any company has any question about this, we’re happy to answer those questions.  They shouldn’t just assume that activities that were not permitted before the JCPOA are not permitted at this point in time.  And so they shouldn’t also assume that activities still prohibited by the primary embargo are also prohibited for foreign actors.  That’s not the way that works.
So when in doubt – my message: when in doubt, ask.
Now, we recognize it is going to take some time for companies to feel confident in reengaging with Iran, and in all fairness, that is due to concerns other than sanctions.  And Iran, as we have said in a candid conversation, also has a certain amount it needs to do to modernize its own banking system to begin to do things to – that it hadn’t done during the years that it was operating under sanctions, and that would facilitate this process.
But I want to make clear the United States is committed to doing our part as we believe it is in our interest to ensure that the JCPOA, the nuclear agreement that we reached, that it is in fact working for all participants.  And just as we have upheld our commitments, we’re going to continue to work with Iran to verify that they uphold theirs also.  It is mutuality that was created in this, and it’s important that we make sure there is mutuality in its implementation.
FOREIGN MINISTER ZARIF:  Thank you, Secretary Kerry.  I think what is important for everybody to understand is that the JCPOA was a balanced agreement, and Iran has implemented its part of the bargain and we hope that with this statement by Secretary Kerry and other steps that were taken by the United State, now we will see serious implementation of all JCPOA benefits that Iran should derive from this agreement so that we can ensure that agreement is a way for addressing international problems, that sanctions and pressure won’t resolve international problems, but negotiations, talks, dialogue in fact are the way to address international problems.
We hope that the statement made today by Secretary Kerry will begin to open the difficult path that has been closed because of concerns that banks had about the U.S. approach towards implementation of the commitments under the JCPOA.  We will continue to have differences with the United States.  Our differences are very serious in a good number of areas.  We will – but we have decided together with P5+1 to address this issue, and we want to show that P5+1 and Iran have been able to resolve a very serious, difficult issue through negotiations, and I believe we should take the necessary steps in that regard.  And I hope that by – through serious action so that the Iranian people can see the benefits of implementation of JCPOA, we can move forward with the long-term implications for this very important agreement, which should create the foundations and not the ceilings for resolution of international issues.  Thank you.
SECRETARY KERRY:  The foreign minister just mentioned one thing I just want to make clear so we’re both on – addressing it.  The foreign minister is correct; there are differences and some of them are obviously serious differences.  Those have to be the subject of future discussion.  But it’s important for people to understand that an agreement is an agreement, and we need to separate, even as we are working to resolve those other differences.  And nothing that I said diminishes the United States commitment to helping to resolve those differences and certainly to continue to work for the peace and stability of the region.  Thank you.
Photo Credits: U.S. Department of State via Flickr Commons