On May 30, Secretary of State John Kerry met with his Iranian counterpart, Mohammad Javad Zarif, for six hours of talks on the nuclear issue. It was the first time that such high level discussions have taken place since the blueprint for a final deal was announced on April 2. On June 4, negotiations resumed at the deputy foreign minister level between Iran and the world’s six major powers – Britain, China, France, Germany, Russia, and the United States. With only weeks remaining before the June 30 deadline for a final deal, the issue of international inspections of military sites remained a key sticking point. French foreign minister Laurent Fabius said “if you say you cannot check any military site, then there is no [real] agreement.” Ali Akbar Velayati, an advisor to Iran’s supreme leader, said that Iran “will never allow its military sites to be inspected.”

The following are quotes from officials on the latest round of talks. 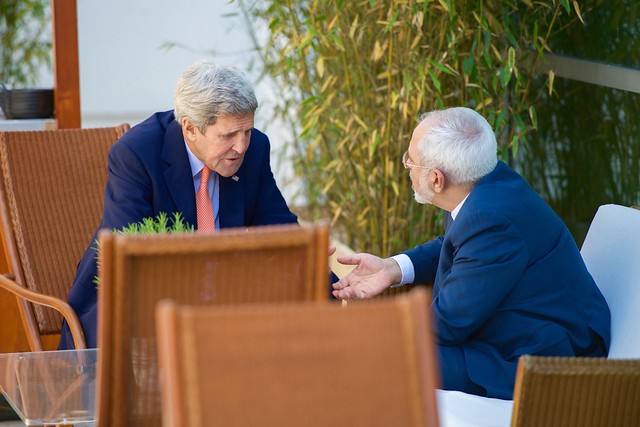 Currently,in various issues we see objectively that it’s impossible to trust the promise of arrogants &speech they make in private meetings.

Foreign Minister Mohammad Javad Zarif
“We have decided to discuss other solutions to resolve this issue,” referring to international inspections of nuclear sites.
“We have decided to work full time for the next three or four weeks to see whether or not it will be possible to reach an agreement.”
—May 30, 2015 after meetings with Secretary of State Kerry
“There are still numerous differences, and efforts will be made in various meetings so that these differences will be reduced to minimum levels and they will be studied in the next ministerial meeting.
The “differences are mainly those that have been discussed publicly.”
—May 31, 2015 to state television

“It has been repeatedly seen that the (UN nuclear) agency’s inspectors have been a plaything in the hands of the CIA, but the Islamic Republic of Iran ... will never allow its military sites to be inspected.
“Records show that some of the agency's inspectors are the agents of the U.S. Central Intelligence Agency and this fact is documented and openly known.
“We have no trust in the American statesmen's conduct and remarks.
“As mentioned by Leader of the Islamic Revolution [Ayatollah Ali Khamenei], Iran will not allow that they [P5+1 countries] will humiliate the country’s scientists under the pretext of meeting nuclear scientists.”
—June 1, 2015 according to Press TV

Allowing Iran's scientists to be interviewed is "generally off the table."
—May 30, 2015, according to the press
“We have a few weeks and hope to reach a final deal by the June 30 deadline or even sooner…There has been progress but still we have a difficult way ahead of us.”
—June 4, 2015, according to the press
“Our basis is mistrust and this is the reality.”
“We don't trust the other side at all and they don't trust us either.”
"Thus all the provisions in a deal... whenever each party feels the other side is violating the commitments, they can snap back and implement whatever existed before the agreement.
"We have taken every necessary measure so this would happen for us. Naturally, the other side will do the same for sanctions.”
“Each word of this instrument is being discussed and sometimes quarrelled on… There are differences but work moves forward very slowly.”
—June 6, 2015, according to the press
“It is a tough and complicated task, and it is moving forward very slowly. It has its own sensitivities and complications but we are still working (on it).”
—June 8, 2015, according to the press
Deputy Foreign Minister for European and American Affairs Majid Takht-e Ravanchi
“If the opposite (negotiating) side does not come up with excessive demands, the negotiations will lead to a result by the announced deadline.”
“The Islamic Republic of Iran’s determination is (based on) pushing ahead with the negotiations seriously and strongly and making all-out efforts to reach a good, reasonable and acceptable agreement.”
—June 7, 2015, according to the press
Government Spokesperson Mohammad Bagher Nobakht
“While the government respects their [people who criticize the talks] concerns, but these protests are illegal [because the Interior Ministry didn't issue them permits to gather]. And based on the view of the Imam [the late Ayatollah Ruhollah Khomeini] and the Supreme Leader [Ayatollah Ali Khamenei], illegal activities are also against the Sharia.
“These are the final days of the negotiations and both sides naturally try to see more of their demands met, and they may even make use of provocative remarks through their officials and unofficial people.
“But what matters is the issues that are written and not speeches, and we are striving to materialize the Iranian nation's rights in full in what is written.
—June 1, 2015 in a press conference
Deputy of Atomic Energy Organization of Iran Behrouz Kamalvandi
“Even in case of verification of information on possible nuclear activities, the IAEA is only permitted to access the site. It is a false assumption that the Agency is allowed to question the scientists one by one.”
—June 8, 2015, according to the press
United States
President Barack Obama

“I can I think demonstrate, not based on any hope but on facts and evidence and analysis that the best way to prevent Iran from having a nuclear weapon is a verifiable tough agreement. A military solution will not fix it, even if the United States will participates, it would temporarily slow down an Iranian nuclear program, but it will not eliminate it.”
—June 1, 2015, in an interview on Israeli television
Vice President’s National Security Advisor Colin Kahl
“Under the deal we are negotiating... Iran's enrichment capability will be substantially rolled back.”
“The deal we are negotiating makes us and the region safer.”
“In the absence of comprehensive agreement to deal with this challenge and constrain Iran's programme, Iran would likely install and begin operating tens of thousands of fissile centrifuges in the near future.”
—June 3, 2015 at a conference in Doha, Qatar via AFP
France
Foreign Minister Laurent Fabius
“The best agreement, if you cannot verify it, it’s useless. Several countries in the region would say, OK, a paper [has been signed] but we think it is not strong enough and therefore we ourselves have to become nuclear.
“Therefore, if you say you cannot check any military site, then there is no [real] agreement.
“If it is too long a delay [between when a request to inspect a site is submitted and when permission is granted to do so by Iran], they have enough time to change everything,” he said.
—June 1, 2015 in an interview with The Wall Street Journal
French Ambassador to the United States Gérard Araud

#Iran. Our goal is to get an agreement by the deadline. Likely that Iran will wait for the last days for compromising, like in March.

Russia
Foreign Minister Sergei Lavrov
The P5+1 countries and Iran can reach an agreement by June 30, unless some participants try “at the 11th hour to get a bit more” than what the blueprint outlined on April 2.
—June 2, 2015 in an interview with Bloomberg Television
“The talks have entered the final stage and we are convinced that the parties ought to reach agreement on all technical issues in order to comply with the already agreed political framework.”
—June 4, 2015, according to the press
China
Foreign Minister Wang Yi
“(We) must push forward the next stage of talks on the basis of the Lausanne framework ... and all parties should not raise any new demands to prevent complicating the talks process.”
“All sides' legitimate concerns ought to be paid attention to and rationally resolved; all sides should meet each other half way and not drift further apart.”
—June 4, 2015, according to the press