On July 14, Iranian Foreign Minister Mohammad Javad Zarif and E.U. foreign policy chief Federica Mogherini announced that Iran and the world's six major powers - Britain, China, France, Germany, Russia, and the United States - had reached a final nuclear agreement. The following is a transcript of the joint statement presented in Vienna, with statements from other leaders of the world's six major powers.

Today is an historic day.

It is a great honour for us to announce that we have reached an agreement on the Iranian nuclear issue.
With courage, political will, mutual respect and leadership, we delivered on what the world was hoping for: a shared commitment to peace and to join hands in order to make our world safer. This is an historic day also because we are creating the conditions for building trust and opening a new chapter in our relationship. 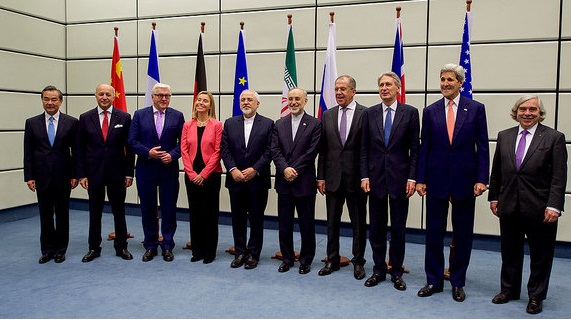 This achievement is the result of a collective effort.
No one ever thought it would be easy. Historic decisions never are. But despite all twists and turns of the talks, and the number of extensions, hope and determination enabled us to overcome all the difficult moments. We have always been aware we had a responsibility to our generation and the future ones.
Thanks to the constructive engagement of all parties, and the dedication and ability of our teams, we have successfully concluded negotiations and resolved a dispute that lasted more than 10 years.
Many people brought these difficult negotiations forward during the last decade and we would like to thank all of them - as we would like to thank the International Atomic Energy Agency for its critical contribution and close cooperation as well as the Austrian government for the support and hospitality.
We, the EU High Representative for Foreign and Security policy and the Foreign Minister of the Islamic Republic of Iran, together with the Foreign Ministers of the People´s Republic of China, France, Germany, the Russian Federation, the United Kingdom and the United States of America met here in Vienna, following several months of intensive work, at various levels and in different formats, to negotiate the text of the Joint Comprehensive Plan of Action (JCPOA), based on the key parameters agreed in Lausanne on 2 April.
We have today agreed on the final text of this Joint Comprehensive Plan of Action
The E3/EU+3 and the Islamic Republic of Iran welcome this historic Joint Comprehensive Plan of Action (JCPOA), which will ensure that Iran’s nuclear programme will be exclusively peaceful, and mark a fundamental shift in their approach to this issue. They anticipate that full implementation of this Joint Comprehensive Plan of Action will positively contribute to regional and international peace and security. Iran reaffirms that under no circumstances will Iran ever seek, develop or acquire any nuclear weapons.
The Joint Comprehensive Plan of Action includes Iran’s own long-term plan with agreed limitations on Iran’s nuclear program, and will produce the comprehensive lifting of all UN Security Council sanctions as well as multilateral and national sanctions related to Iran’s nuclear programme, including steps on access in areas of trade, technology, finance, and energy.
The Joint Comprehensive Plan of Action comprises of a main text, and five technical annexes - on nuclear, sanctions, civil nuclear energy cooperation, a joint commission, and implementation. These documents are detailed and specific: that is important because all sides wanted clarity so as to ensure the full and effective implementation of the agreement.
The Joint Comprehensive Plan of Action is a balanced deal that respects the interests of all sides. It is also complex, detailed and technical: we cannot fully summarise the agreement now. But the full main text and all its annexes will be made public still today and will be presented within the next few days by the E3+3 to the Security Council for endorsement.
We know that this agreement will be subject to intense scrutiny. But what we are announcing today is not only a deal but a good deal. And a good deal for all sides – and the wider international community.
This agreement opens new possibilities and a way forward to end a crisis that has lasted for more than 10 years. We are committed to make sure this Joint Comprehensive Plan of Action is fully implemented, counting also on the contribution of the International Atomic Energy Agency.
We call on the world community to support the implementation of this historic effort.
This is the conclusion of our negotiations, but this is not the end of our common work. We will keep doing this important task together.
United Kingdom
Prime Minister David Cameron
"I think [the deal] is so much better than the alternative.  I think that if there wasn't a deal, I think we would face Iran with a nuclear weapon.  And that would've given a terrible choice to the West of either enabling that, allowing that to happen, or a very difficult decision to take military action.  So, this the better outcome.  It keeps Iran away from a nuclear weapon.  It's a successful negotiation for the allies.  And I think we should be proud of a good deal done."
"Now, of course, there'll be those that complain about details of the deal.  But fundamentally, this is the toughest set of proposals put in place and verification put in place and inspection put in place that I think we've seen in any of these sorts of negotiations.  So, I think it is a good deal.  It was right to get on with it.  And the sanctions pressure worked.  And I think that's all to the credit of the U.S. administration, to Barack Obama, but also the action taken in Europe, too."
—July 19, 2015, on NBC's Meet the Press
Foreign Minister Phillip Hammond

In return, once Iran has taken key steps to introduce these restrictions, the international community will lift some of its sanctions on Iran, delivering significant economic and financial benefits.
Having reached this important agreement, our focus will now be on its swift and full implementation to make sure that a nuclear weapon remains beyond Iran’s reach.
We recognise the concern in the region about Iran’s historic pattern of regional activity. We will maintain our clear position in support of the Gulf states and against Iranian interference in their internal affairs. We hope, and expect, that this agreement will herald a step-change in Iran’s relations with its neighbours and with the international community.
The removal, over time, of economic and financial sanctions represents a huge opportunity for Iranians to make positive decisions about their country’s future and its role in the region.
We will continue to work closely with our international partners to encourage Iran to play a transparent and constructive role in regional affairs, particularly in the struggle against violent Islamist extremism.
—July 14, 2015 in a statement
France
Foreign Minister Laurent Fabius

Iran's enriched uranium stocks will be strictly limited, as well as the number of centrifuges #IranDeal

Thanks to the Additional Protocol the @iaeaorg will be able to gain access to Iran's military sites, if necessary, under certain conditions

“Despite the attempts to justify forceful scenarios, the negotiators made a firm choice in favor of stability and cooperation, which will be reflected in a UN Security Council resolution."
“Russia welcomes the decision reached in Vienna today, aimed at resolving the situation around the Iranian nuclear program, and the Joint Comprehensive Action Plan approved by the six mediators and Iran. We are certain that today the world sighed with great relief."

“The comprehensive agreement is based on the solid foundation of international law, primarily, the Treaty on the Non-Proliferation of Nuclear Weapon and the International Atomic Energy Agency (IAEA) Safeguards Agreement, including the Additional Protocol."
“We have come a long way in the framework of the UN Security Council-backed negotiations involving Russia, China, the United States, France, the United Kingdom, Iran and the European Union. We are satisfied that the decision they reached is based on the principle of gradualness and reciprocity our country has consistently defended at every stage of these complicated negotiations."
—July 14, 2015, in a statement(via Iran Front Page)