Khamenei vs. Rouhani on Non-Muslims

Iran’s supreme leader and president take two different approaches to interfaith outreach. While extolling the qualities of shared prophets with Christianity and Judaism, Ayatollah Ali Khamenei often censures other countries or groups for supposedly not living up to the high standards set by Jesus, Moses and others. President Hassan Rouhani, on the other hand, focuses on shared values and faith rather than politicizing his messages to or about Jews, Christians and Zoroastrians. 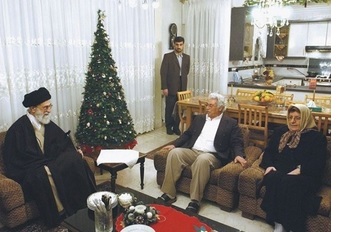 For Christmas 2014, postings on Khamenei’s official Twitter account mixed praise of Jesus and Mary with backhanded condemnation of the West. Some of the remarks were more than two decades old, repurposed from the pre-Twitter age. Many of his tweets included trending hashtags referring to racial issues in the United States, such as #BlackLivesMatter and #Ferguson — references to the killing of unarmed African-Americans by white police officers in New York and Missouri. Even the caption under a picture of Khamenei visiting with a Christian family (above) had a political overtone. The tweet invoked martyrdom and Jesus because the couple's son died in the 1980-1988 war with Iraq. 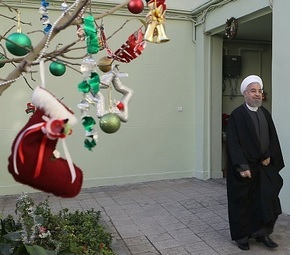 President Hassan Rouhani, however, did not mix politics or criticism with his Christmas outreach. The tweet posted on his account was a simple wish for a merry Christmas and a blessing from Jesus, a prophet of "peace and love." Rouhani also visited with elderly Christians at Tehran’s St. Mary Hospice on New Year’s Day. Instead of referring to the Iran-Iraq War, Rouhani used the opportunity to emphasize that all citizens, regardless of age or faith, deserve proper services.
The difference in tone between the two leaders' words is a microcosm for how they view the outside world. Khamenei dwells on past grievances and tends to be confrontational, while Rouhani is more interested in dialogue and real outreach. During his first press conference after winning the 2013 presidential election, Rouhani called Iran's relationship with the United States an "old wound" that needed healing. "Wisdom tells us both countries need to think more about the future and try to sit down and find solutions to past issues and rectify things," he said. Rouhani's outlook has played a critical role in advancing negotiations between Iran and the world's six major powers on Tehran's controversial nuclear program.

Iran may be the world's only modern theocracy, but three religious minorities are actually woven into the political fabric under the constitution. Muslims account for some 99 percent of the country's 80 million people. Yet Christians, Jews and Zoroastrians all have seats in the 290-seat parliament proportionate to their populations: 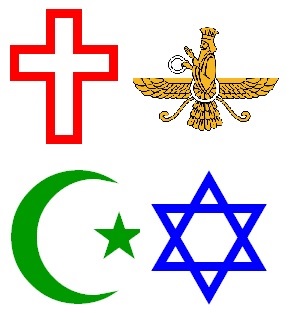 The following is a collection of tweets from Iran's supreme leader and president related to these faiths.
Christianity

It's expected that followers of #Jesus follow him in his fight against arrogants and in his support for the oppressed. #BlackLivesMatter

In his tweets, Khamenei has frequently used word “arrogants.” The term refers to Western powers or Israel.

Today,arrogants claim to follow #Jesus but they took the place of tyrants against whom Jesus spent his life to fight. #KillerIsrael 12/27/00

If #Jesus were among us today he wouldn't spare a second to fight the arrogants&support the oppressed.#Ferguson #Gaza pic.twitter.com/P0N8jmKyQU

President Rouhani's Christmas tweet, on the other hand, was a more tolerant attempt at outreach.

May Jesus Christ, Prophet of peace & love, bless us all on this day. Wishing Merry #Christmas to those celebrating, esp #Iranian Christians.

The president's website also published several pictures of his visit to a facility for elderly Christians.

Judaism
In his tweets on Judaism, Khamenei has differentiated between the religion and Zionism.

There are Jews living in various countries;in Iran Jews live respectably 'cuz its their own country but #Zionism is different from #Judaism.

In a March 2014 speech marking Nowruz, the Persian New Year, Khamenei questioned the veracity of the Holocaust. This issue has long been a controversy. Iran's only Jewish member of parliament challenged Mahmoud Ahmadinejad's denial of the Holocaust in 2005.

In September 2013, President Rouhani wished Jews around the world and in Iran a happy new year on Twitter. He also called the Holocaust a "reprehensible" crime against the Jewish people during an interview with CNN. Weeks later, Rouhani invited Iran’s only Jewish lawmaker to accompany his delegation to the 2013 U.N. General Assembly in New York. These moves sharply contrasted with former President Mahmoud Ahmadinejad's Holocaust denial. Rouhani has since twice donated more than $150,000 in government funds to the country’s only Jewish hospital.

As the sun is about to set here in #Tehran I wish all Jews, especially Iranian Jews, a blessed Rosh Hashanah. pic.twitter.com/tmaf84x7UR

In late 2013, the head of Tehran’s Jewish Association told AP that Rouhani’s government had listened to the community’s grievances and requests. “That we are being consulted is an important step forward,” said Homayoun Samiah. “Under former President Mahmoud Ahmadinejad, nobody was listening to us. Our requests fell on deaf ears.” Rouhani’s government has also agreed to allow Jewish schools to be closed on Saturday to mark the Sabbath.
Zoroastrianism
In December 2013, Rouhani sent a message to the 10th International Zoroastrian Congress held in Mumbai, India. He proudly referred to Iran as the birthplace of the ancient Prophet Zoroaster. Excerpts of the letter were also tweeted.

Zoroastrianism and its followers have had a major impact on both Iranian & Islamic culture and civilization. #ZoroastrianWorldCongress