The debate over the nuclear deal is heating up in Iran. President Hassan Rouhani’s administration has been trying to sell the agreement since it was announced on July 14. But hardliners' criticism of the deal is mounting.
Part of the debate is over whether or not the agreement and its accompanying U.N. Security Council resolution have crossed Supreme Leader Ayatollah Ali Khamenei’s guidelines. “Some parts of the [U.N. resolution] draft have clearly crossed the Islamic republic's red lines, especially in Iran's military capabilities,” said Major General Mohammad Ali Jafari, the Revolutionary Guards commander, on July 20.
Supreme Leader Khamenei has expressed serious skepticism about the intentions of the West, especially the United States. He has vowed that the deal will not open Iran to American influence. Khamenei, however, has not explicitly declared support for or opposition to the deal.

By #IranDeal whose approval is of question either here or there,they intended to find a way to infiltrate into the country.We shut this way.

Leader addressing Cabinet: Concluding #IranTalks was of main accomplishments and we hope any possible problem for it would be resolved

Tactics of hostility and detriment might have changed and been revised, but all authorities must beware of playing role in enemy’s plots.

Powerful officials, especially in the military and parliament, have argued that the deal does not further Iran’s national interests.
Khamenei’s foreign policy advisor, Ali Akbar Velayati, said that the deal is not free of weak points. Yet in a televised exchange with a news anchor critical of the deal, Velayati defended Iran’s negotiating team. “Whatever I say about the deal won’t convince you … I don’t want to argue with you… If there is something that hasn't been achieved, definitely they [negotiators] could not have done more.”
Intelligence Minister Mahmoud Alavi also defended the negotiating team. “There are those who claim that the [Rouhani] administration wanted to give the chalice of poison to our supreme leader. This is not criticism. This is an accusation, and it is destructive,” he told Etemad newspaper on August 26. “Whatever was achieved during the negotiations is the result of work by the supreme leader, the government and the negotiators.”
Among hardliners, Hossein Shariatmadari argued that the supreme leader’s position was clear. “One can definitely say that the supreme leader is not, by any means, satisfied with the text of the deal,” the editor of the hardline paper Kayhan wrote in an August 15 editorial. In the past, Shariatmadari has been regarded as the unofficial mouthpiece of the supreme leader’s office.
The editorial sparked a whole separate debate over who speaks for Khamenei. In a reflection of divisions among hardliners, Shariatmadari’s comment, prompted a swift retort from Hamid Reza Moghaddam-Far, the IRGC media advisor. “How come a revolutionary brother like you is insisting on instilling in his audience a feeling that the supreme leader’s line of thinking is like his?” Moghaddam-Far wrote in an Entekhab op-ed on August 16. (It was translated by Iran Front Page.) “Don’t you think it would be better if you expressed your own views, rather than talk on behalf of the supreme leader?”

IRGC advisor to Kayhan: You’d better speak for yourself, not on behalf of Leader http://t.co/RSTfgiOlU8 #Iran #media pic.twitter.com/s7kBNN7Ry1

Other top revolutionary names have also come under fire during the internal debate. Vice President Masoumeh Ebtekar, who was the spokesperson for the U.S. Embassy hostage-takers, has (ironically) supported the nuclear agreement. “Everyone is going to benefit more or less [from the diplomacy],” she told BBC reporter Kim Ghattas in August. But Ebtekar added that the deal has given reformists “a lot of leverage among the Iranian political groups.”
A front-page article in the hardline newspaper Vatan Emrooz then attacked Ebtekar for her “partisan sentiment.” It also warned about possible U.S. attempts to influence Iran’s domestic politics through the nuclear deal.

Hardliners in #Tehran attack VP @ebtekarm for her views on #IranDeal in the INT w/ @BBCKimGhattas. pic.twitter.com/TTwpWbcfmP

The following is a sampling of remarks by supporters and critics of the deal in Iran.

On August 19, Iran’s parliament selected 15 members for a panel that will review the nuclear deal between Iran and the world’s six major powers. Two dozen law makers volunteered to serve on the panel; 15 were then elected by the full parliament. The group includes 13 conservatives. 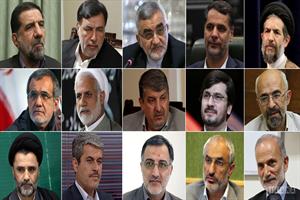 In an interview with Alef news, Foreign Minister Mohammad Javad Zarif said that the nuclear deal is not a treaty, and therefore does not require Parliament’s ratification. “As a person who has taught law for quite some time, I have to tell you that the JCPOA [Joint Comprehensive Plan of Action] is, in fact, under the management and supervision of the U.N. Security Council’s resolutions, which has nullified the previous resolutions,” he said in the interview, which was published on August 21.
Another senior member of the negotiating team, Deputy Foreign Minister Majid Takht Ravanchi, also does not see a need for ratification. “The JCPOA’s nature is not like a protocol or an international treaty. The other parties [to the deal], namely the six countries that negotiated with Iran, are not going to ratify it. Thus, there is no need for its ratification by the parliament,” he said on August 26.
In September, Iran's top nuclear official, Ali Akbar Salehi, announced that International Atomic Energy Agency chief Yukiya Amano would visit Iran. Shortly after, the chairman of the parliamentary commission, Ali Reza Zakani, asked Zarif in a letter to invite Amano to parliament to answer lawmakers’ questions.
On August 16, a petition signed by 201 out of 290 members of parliament called on the government to formally submit the deal for review. The following is a translation of the petition, as published by Entekhab News and translated by Iran Front Page, along with key remarks by the 15 lawmakers on the review panel.
Petition Signed by 201 Lawmakers
In line with our legal obligations, we, the deputies of the Islamic Consultative Assembly, who have signed this petition announce that:
1. We thank the nuclear negotiating team for its tireless efforts in the course of the talks.
2. Under Articles 77 and 125 of the Constitution, the review of the Joint Comprehensive Plan of Action falls under the purview of the Islamic Consultative Assembly and requires cooperation from all relevant institutions.
3. The executive branch should immediately present the Joint Comprehensive Plan of Action in the form of a bill.
4. Any voluntary measures and implementation of the deal – be it temporary, permanent or conditional – would be illegal before the approval of the Islamic Consultative Assembly and subsequent confirmation of the Guardian Council.

Members of the 15-member panel to review the deal
Alaeddin Boroujerdi (Tehran), National Security and Foreign Policy Committee Chairman
“We are still distrustful of the United States because of the country’s arrogant nature and its support for the Zionist regime [Israel] in the massacre of the oppressed people of Palestine and its move to back Saudi Arabia’s killing of the Yemeni people. In this climate of mistrust, there are concerns and if they renege [on the nuclear agreement], we will do the same.”
—Aug. 9, 2015 to al Alam TV via Tasnim News Agency
Ibrahim Karkhaneh (Hamedan)
“The limitations [imposed on Iran] go beyond the NPT [Nuclear Non-Proliferation Treaty].”
—Aug. 1, 2015 according to Fars New Agency
Ismail Kowsari (Tehran), National Security and Foreign Policy Committee member
“The JCPOA [the final nuclear deal or Joint Comprehensive Plan of Action] is an international treaty. Therefore, Parliament must ratify it.”
—Aug. 2, 2015 in remarks via the Islamic Consultative Assembly News Agency
Hossein Naghavi Hosseini (Varamin), National Security and Foreign Policy Committee member
“Ever since news about a confidential agreement between Iran and the IAEA was made public, US lawmakers have been seeking to learn about its content.”
“What is surprising is that Amano, who is the director general of an independent international agency, and not a US government secretary, is summoned to the US Senate and he accepts to show up.”
—Aug. 2, 2015 according to Fars News Agency via Iran Front Page
Hossein Nejabat (Tehran)
“We will not allow any intrusion to our defense and military installations.”
“There are points of contention in the agreement.”
—July 26, 2015 via Tasnim News
Alireza Zakani (Tehran), Chairman of the JCPOA Committee
“The Administration’s only option is to send the JCPOA as a bill.”
—Aug. 19, 2015 in an interview with Tasnim News Agency
Mohammad Hassan Aboutorabi-Fard (Tehran), First Vice-Speaker
Vahid Ahmadi (Kangavar)
Mansour Arani (Aran and Bigdel)
Mehrdad Bazrpash (Tehran)
Mansour Haghighatpour (Ardebil)
Seyyed Mahmoud Nabavian (Tehran)
Masoud Pezeshkian (Tabriz)
Gholamreza Tajgardoun (Gachsaran)
Mohammad Mehdi Zahedi (Kerman)
Other lawmakers
Parliamentary Speaker Ali Larijani 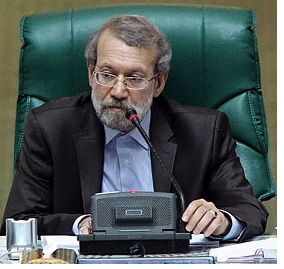 “We should understand that the current situation is a new era; the negotiations should not be scaled down to merely facile verbal give and take and without difficulty; this has been one of the most difficult negotiations in the history of Revolution; talks had been in constant frequenting between negotiation venue and Tehran to be discussed by authorities and get rechanneled into another module, and it was a two-way street.”
“What appears on paper reflects only one side of the difficulties inherent in the negotiations. The deal is the end of a period; however, it is the onset of an eventful era; it should not be assumed that the path after the deal will be without its own difficulties; current propaganda raised about Parchin is quite superficial, aiming at wielding impact on international decision-making, and a solution to domestic concerns inside the United States.”
“We should be aware that the post-deal era is a new untrodden path with new challenges; we should understand well the JCPOA document, and act out of honesty and good faith in explaining its provisions.”
“This is definitely a trade-off, and no one would claim a maximal gain for Iran in the JCPOA; however, the major issues of concern for Iran had been well-balanced vis-à-vis the Western demands, which is first to retain the enrichment right and second removal of sanctions, which will not be without its own consequences.”
—Aug. 8, 2015 in an address to Parliament’s Joint Budget Commission as reported by Khorosan
The nuclear deal is a “national achievement” that should lead to growth in production and prosperity in the cultural, defense and science fields.
—July 23, 2015 according to IRIB News