Saudi Arabia's airstrike campaign against Houthi positions in Yemen has drawn strong condemnation from Iranian officials. Foreign Minister Mohammad Javad Zarif demanded an “immediate halt” to Saudi military actions, which began on March 26. Iran is widely seen as the main backer of the Houthis, a Zaydi Shiite movement that has been fighting Yemen’s Sunni-majority government since 2004. The Houthis, who have allied themselves with forces loyal to ex-president Ali Abdullah Saleh, have controlled the capital city Sanaa since September 2014.

On April 8, Secretary of State John Kerry told PBS that Washington is “well aware of the support” Iran has provided to the Houthis, including a number of Iranian flights that go to Yemen weekly. “Iran needs to recognize that the United States is not going to stand by while the region is destabilized, or while people engage in overt warfare across lines — international boundaries of other countries,” he warned.
Iranian officials, however, have countered claims about Tehran’s support for the Houthis. "The allegations about sending weapons by the Islamic Republic of Iran to Yemen are completely fabricated and sheer lies," said Foreign Ministry Spokeswoman Marziyeh Afkham.
The following are excerpted remarks from Iranian officials on the Saudi airstrikes in Yemen.
Iran
Supreme Leader Ayatollah Ali Khamenei
“I strongly warn the Saudis to end adventurism and bloodshed in Yemen; such movements in the region would not be tolerated; killing of children and women and destroying a country’s infrastructure and national wealth is a great crime.”
—April 9, 2015, in a speech

What Saudis did in #Yemen is exactly what Israel did to #Palestine.Acting agnst Yemenis is a genocide that can be prosecuted in int’l courts

The Saudis will certainly face loss in this issue and won't emerge victorious at all. #Yemen pic.twitter.com/q2nrDAmPuL

Israel’s military is bigger than Saudi’s& #Gaza is a small area,but they failed;#Yemen is a vast country w a population of tens of millions.

Despite disputes,#Saudis used to display composure w us but now inexperienced #youngsters have come to power& replaced composure w barbarism

I warn that they should refrain from any criminal move in #Yemen. The US will also fail & face loss in this issue. pic.twitter.com/ittzr6JcOf

“The opposition to foreign intervention constitutes the Islamic Republic’s stance on all countries, including Yemen."
“We believe that the solution to the Yemeni crisis lies in an end to foreign intervention and attack on the country’s people.”
—April 7, 2015, in a meeting with Turkish president Recep Tayyip Erdogan
President Hassan Rouhani

Why do you bomb oppressed people of Yemen, destroy infrastructure of a weak country & kill women & children? #Yemenattack

To regional countries: stability & security achieved by engagement & respect for people's votes, not bombardment of the oppressed & helpless

“[Air strikes] are simply not the answer... All operations should end on land and from the air.”
“This issue should be resolved by the Yemenis... Iran and Saudi Arabia need to talk but we cannot talk to determine the future of Yemen.”
—April 14, 2015, according to the press
Defense Minister Hossein Dehghan
“The Saudi government, which undertook this military invasion with the help of America and Israel and intelligence help from some regional countries, not only will not achieve its own illegitimate goals, but has provided the grounds for its own collapse and irreparable failures and a similar fate of that of Saddam [Hussein] is awaiting it.”
"The Saudi government should know that by supporting financially, logistically and by training of takfiris and terrorists in Syria, Iraq, Afghanistan, Central Asia and the Caucuses, and attacking Yemen while preventing humanitarian aid, will not turn it into an important country in the region.”
—April 16, 2015, according to the press
Deputy Foreign Minister Hossein Amir Abdollahian
"We condemn foreign interference with the situation in Yemen by any country, be it Iran, Saudi Arabia, or the United States.”
"Carrying out airstrikes and starting a war is easy. Putting an end to a war and quitting a war is hard."
—March 26, 2015, according to the press
"Supporters of terrorism and militarism in the region will become victim of their own wrong policies."
"If a political solution is not found soon for the war in Yemen, it will result in a new type of terrorism in the region."
"The developments of the recent years in the region have shown that military and violent acts have not resolved anything and, rather, made the situation even more complicated in Iraq, Syria, Bahrain and recently Yemen."
—April 8, 2015, according to the press
Judiciary Chief Sadeq Amoli Larijani
"Saudi Arabia's aggression against Yemen is a very regrettable event in the Muslim world which should end as soon as possible through talks and negotiations; otherwise, this blatant aggression of a government which claims (to be leading) Islam, against the Muslim people of another country who want to decide their fate will not remain unanswered."
"When naive individual decisions are made in a country which doesn’t have the least experience of democracy, has no parliament and no elections, the result will be the aggression of a state which claims to be the leader of Islam to another Muslim nation preventing its people from exercising their right of sovereignty."
—April 8, 2015, according to the press
Chief of Staff of the Iranian Armed Forces Major General Hassan Firouzabadi
"The silence of the western states and the international bodies on the current developments in Yemen and the destruction of the country's infrastructures has taken the world public opinion to this conclusion that the al-Saud's aggression was staged with their green light."
—April 8, 2015, according to the press
Army Commander Major General Ataollah Salehi
“It’s a pity that today, the arrogance has plagued the Islamic world through deception, in a way that Muslims are fighting each other instead of fighting against the archenemy, namely Israel."
—April 9, 2015, according to the press
Foreign Ministry Spokeswoman Marziyeh Afkham 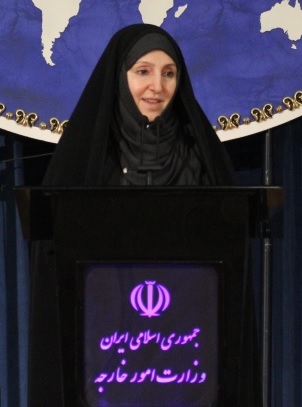 "Iran wants an immediate halt to all military aggressions and air strikes against Yemen and its people."
—March 26, 2015, according to the press
"Resorting to military acts against Yemen which is entangled in an internal crisis and fighting terrorism will further complicate the situation, spread the range of crisis and destroy opportunities to settle the internal differences in Yemen peacefully.”
"This aggression will merely result in the spread of terrorism and extremism and will spread insecurity to the entire region."
—March 26, 2015, according to the press
“These operations are a dangerous step and completely contrary to international obligations in respecting the national sovereignty of other countries.”
—March 26, 2015, according to the press
"The allegations about sending weapons by the Islamic Republic of Iran to Yemen are completely fabricated and sheer lies."
—March 31, 2015, according to the press
Basij Commander Brigadier General Mohammad Reza Naqdi
"It would be wrong think that Saudi Arabia is administering the war in Yemen, while the US is in charge."
"You cannot stand against the will of a nation with an army; the Saudi army is apparently in battlefield, but it is the US that plays the role."
"Imposing war on Yemen will, God willingly, have no result other than Saddam's fate for the aggressors and the US that is the direct sponsor of this crime will have to leave the region forever after losing its puppet, the Al Saud regime."
—April 2, 2015, according to the press
Senior Advisor to the Chief of Staff of the Iranian Armed Forces Brigadier General Seyed Mohammad Baqerzadeh
"This aggression is playing with fire and the Al Saud regime will never be able to bring Yemen under its control."
"This war will have dire repercussions for the US and Saudi interests in future just like the wars in Syria and Iraq."
—April 2, 2015, according to the press
Head of Parliament's National Security and Foreign Policy Committee Alaedin Boroujerdi
“The fact that Saudi Arabia has fanned the flames of a new war in the region shows its carelessness."
“The smoke of this fire will go into the eyes of Saudi Arabia as war is never limited to one place only. We hope this military operation will be halted immediately and the Yemen problem solved through political means.”
“America, which leads the fire mongering in the region, has supported this act and no doubt Saudi Arabia and some countries in the Arab cooperation council would not get involved without America's permission."
“Having imposed long years of crisis in Iraq, Syria and Afghanistan, America has in practice started another crisis and massacre on the Islamic world and this act is strongly condemned."
—March 26, 2015, according to the press
Ambassador to the United Nations Gholamali Khoshroo
Allegations of Iranian involvement in Yemen are “fabricated to distract attentions from the misguided and failed policies that have led to the current political and humanitarian crisis in Yemen.”

“Preposterous narratives trying to depict [the Yemen conflict] as merely a battleground between Sunnis and Shias are entirely erroneous and invented simply to advance the interests of the foreigners.”
“Yemeni-led dialogue and conciliation process among all Yemeni political and social groups is the only way to resolve the Yemeni predicament.”
—April 15, 2015, according to the press
Photo credit: Zarif by Robin Wright; Afkham via Iran's Ministry of Foreign Affairs