Iran’s supreme leader has taken to social media to condemn chemical weapons used against Iran nearly three decades ago. Ayatollah Ali Khamenei’s office released an infographic on the 27th anniversary of Iraq’s use of mustard gas and nerve agents near the village of Sumar, Iran. The infographic on Khamenei's Facebook page states:

•Iraq launched more than 570 chemical attacks on Iran from 1983 to 1988.
•Some 1 million people exposed to chemical fumes.
•Some 100,000 Iranians still suffer from acute complications as a result of exposure.
•Western companies provided Saddam Hussein with the material to produce the weapons. 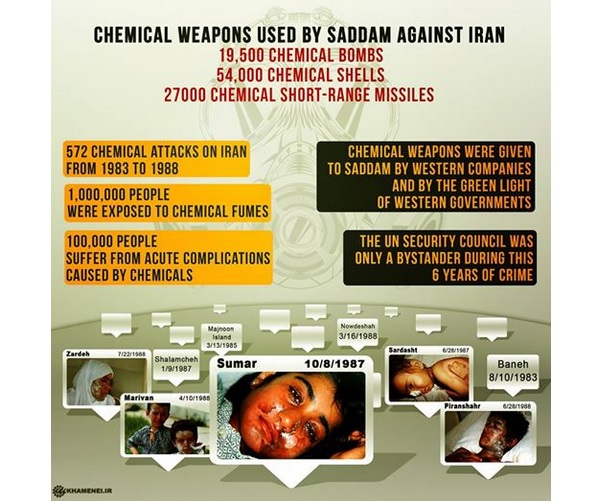 War is tough and unfavorable but even war has its own rules.  #Islam orders us to observe human values during wars.
In 1980-88 war, #Iran was bombarded with Saddam’s chemical weapons for about 6 years and the UN was only a bystander to this crime.
Which countries provided Saddam’s arsenals with chemical weapons which he used against the Iranians for several years?
The arrogants knew Saddam would use chemical weapons on Iranian women and kids but they armed him with illegal weapons.
Ayatollah Khamenei, 7/23/1997

The following is a list of instances of chemical weapon use by Iraq from the U.S. government*:
*Numerous other smaller scale chemical weapons attacks occurred.