Ironically, the most widely celebrated holiday in the Islamic Republic of Iran long predates the official religion. Nowruz, literally “New Day” in Farsi, marks the first day of spring and the Persian New Year. The holiday, which falls on March 20 this year, is widely celebrated across the Middle East and Central Asia. 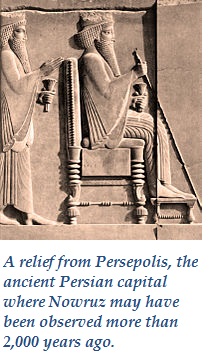 Nowruz is a national holiday celebrated by Iranians of virtually all ethnicities and religions. Celebrations may date back to Cyrus the Great’s reign in the sixth century B.C. Many of the season’s traditions have roots in Zoroastrianism, an ancient monotheistic faith still practiced by some 20,000 in Iran.
Shortly after the 1979 Islamic Revolution, some hardliners unsuccessfully tried to suppress the holiday due to its pre-Islamic origins. But Iran has never severed connections to its pre-Islamic past. “Iran’s advancements after Islam are incomparable to its past. However, pre-Islamic history of Iran is also part of our history,” Supreme Leader Ayatollah Ali Khamenei said in 2008. Most Iranians still look to the ancient Persian Empire as a source of pride.
The following is an overview of Iranian traditions associated with Nowruz.
A Persian Santa Claus and Troubadour 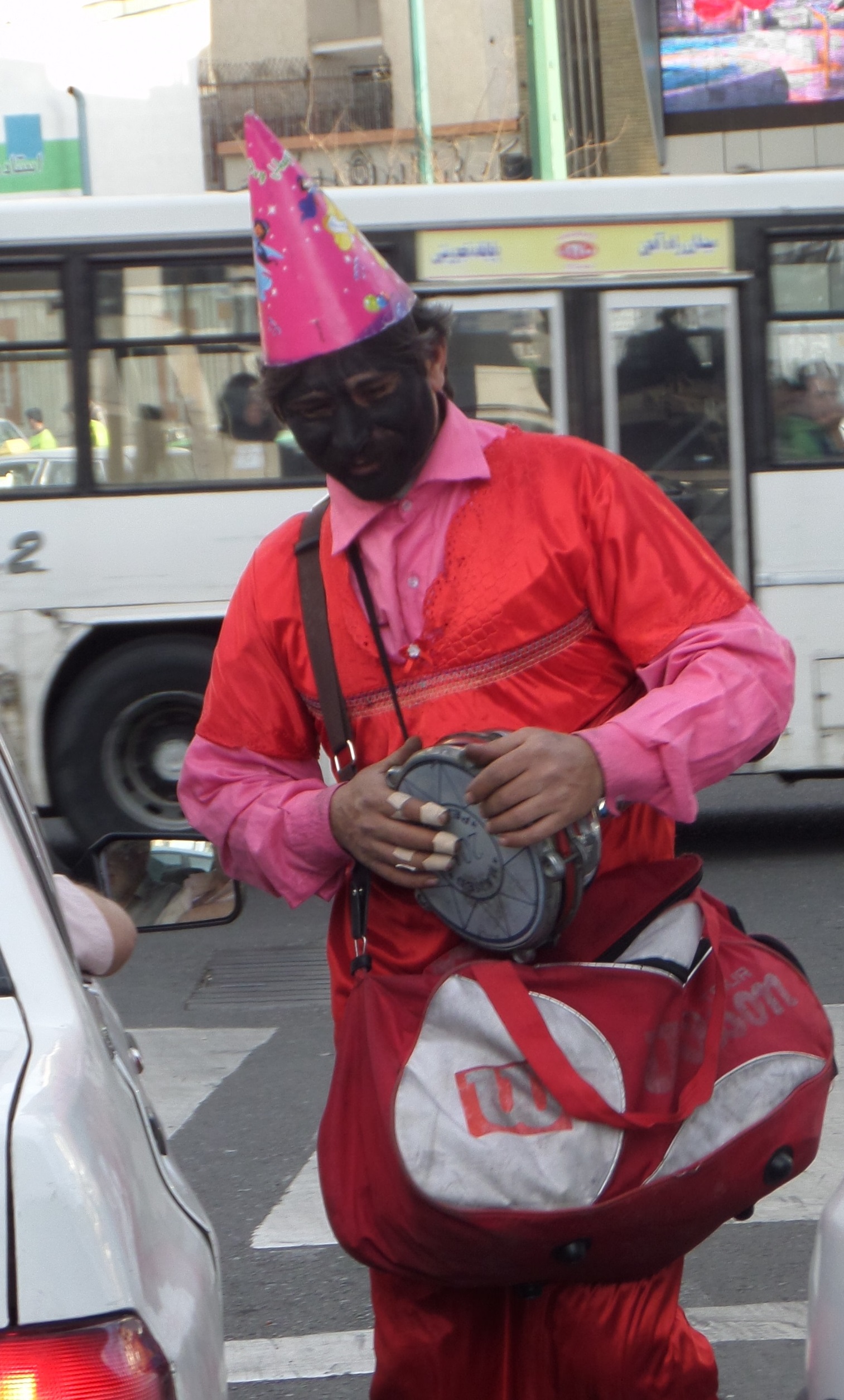 Amoo, or “Uncle,” Nowruz, and his sidekick Haji Piruz are folk characters who herald the spring. Uncle Nowruz, like Santa Claus, hands out presents to children and is an older man with a white beard. Haji Piruz, his clownish assistant, sings joyous songs and plays a tambourine or drum in city streets and squares. Men and boys blacken their faces with soot, and wear bright red clothing and a conical hat to portray the character in hopes of earning some coins for providing entertainment. The following is a translation of one common song associated with Haji Piruz:
Wind and rain have gone.
Lord Nowurz has come.
Friends, convey this message.
The New Year has come again
This spring be your good luck
The tulip fields be your joy.
Nowruz is celebrated on the Spring Equinox, but the holiday includes many stages and weeks of preparation.
Spring Cleaning
Iranians begin preparing their homes for Nowrouz weeks in advance. The annual spring cleaning is known in Farsi as khoneh takooni, or “shaking the house.” Families meticulously wash rugs, windows, curtains and repair furniture. They throw out or donate old household goods and purchase new clothing to greet the coming spring.

All across #iran u c this right now: carpets hung 2 dry 4 spring cleaning, in preparation for the new year. pic.twitter.com/uiNaQ4uIOj

Haft Seen Table
One of the most important Nowruz traditions is setting the haft seen table, which includes seven symbolic items all starting the with an “s” sound: 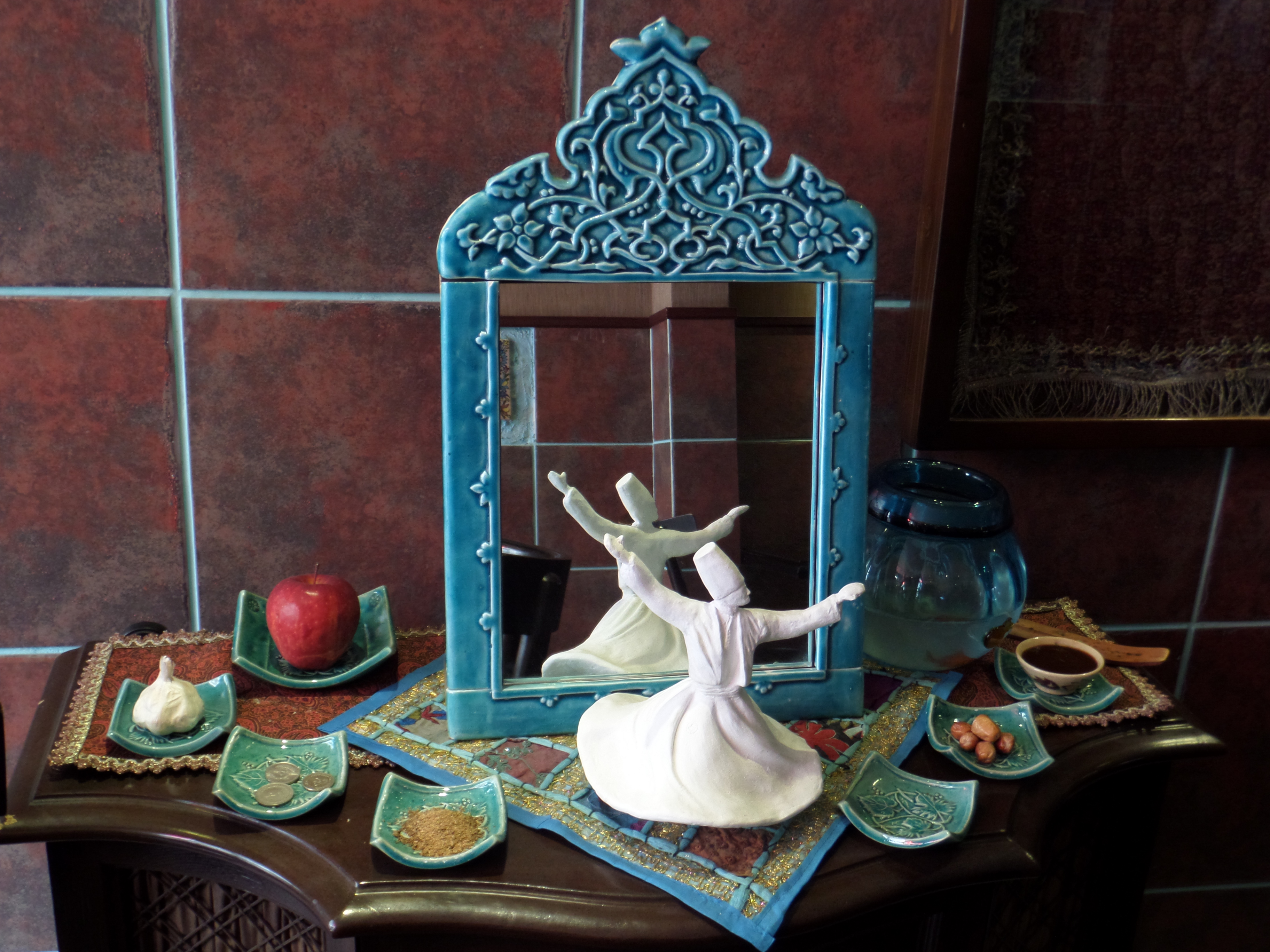 •  Sabzeh (sprouted wheat grass): For rebirth and renewal
•  Samanu (sweet pudding): For affluence and fertility
•  Senjed (sweet, dried lotus tree fruit): For love
•  Serkeh (vinegar): For patience and wisdom gained through aging
•  Sir (garlic): For medicine and maintaining good health
•  Sib (apples): For health and beauty
•  Sumac (crushed spice made from reddish berries): For recalling the sunrise
Additional items on the table include:
•  Mirror: To reflect on the past year
•  Live goldfish in a bowl: To represent new life
•  Orange in a bowl of water: To symbolize the Earth
•  Decorated eggs: For fertility
•  Coins: For future prosperity
•  Books of classical poetry and/or the Koran: For spirituality
Fire Jumping
On the last Wednesday of the year, Iranians set up bonfires in public places and leap over the flames in a ritual, Chahar Shanbeh Soori, thought to ensure good health for the year. People sing the following song addressing the fire while jumping:
Give me your beautiful red color
And take back my sickly pallor!

More of Chaharshanbe Suri celebrations in #Iran. Fireworks going off all over Tehran. pic.twitter.com/zIxSfqNmzF On the Chahar Shanbeh Soori, some Iranians make wishes and distribute a special soup consisting of roasted garbanzo beans, almonds, pistachios, hazelnuts and dried figs, apricots and raisins.
Another soup, Ash-e-reshteh (left), is traditionally served around Nowrouz. The hearty mixture is filled with noodles and multiple types of beans. The noodle knots represent the many possibilities for the coming year, and untangling them is thought to bring good fortune.
Sabzi pollo mahi, is a common fish and rice dish served during Nowrouz. The rice is mixed with green herbs to symbolize the coming spring.
Several types of sweets are also ubiquitous at this time of year.
•  Baqlava: flaky pastry sweetened with rosewater
•  Naan bereng: cookies made from rice flour
•  Noghl: sugar-coated almonds
•  Samanu: a sweet pudding made from sprouted wheat
Many Iranians have found these foods and other items increasingly expensive since 2012. Tightened international sanctions imposed over Tehran’s controversial nuclear program have dramatically raised prices. “I didn’t buy nuts last year, because prices were very high and I won’t buy them this year either,” a 37-year-old mother of two told The National.
The Count Down 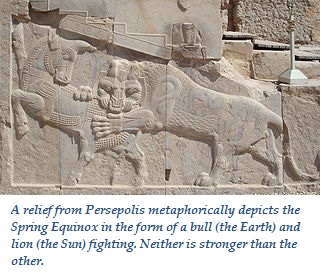 After Chahar Shanbeh Soori, Iranians wait with their families and friends for the exact moment when the vernal equinox occurs, Tahvil in Farsi. Elders distribute sweets and children receive coins. People begin making short visits to the homes of friends and family throughout the day and night. At each house visit, hosts provide nuts, sweets, dried fruits and tea to their guests.
Sizdah Bedar
On the 13th day of the new year, Iranians try to get rid of the bad luck associated with the number 13 by spending the day outside having fun with family and friends. Many people pack picnic lunches and head to parks or the countryside. The tradition is known as sizdah bedar, or “getting rid of the 13th.”
Iranians also discard the sabzeh grass from the Haft Seen table, which collected all the potential bad fortune of a family during Nowruz. Some unmarried girls knot grass blades symbolizing the union of a man and woman in hopes of finding a husband before the next Nowruz.