Roundup of Briefings as Drafting Begins

The world’s six major powers and Iran began drafting a final nuclear deal during a four-day round of talks that ended on June 20. “We have worked extremely hard all week to develop elements we can bring together when we meet for the next round,” said Michael Man, a spokesperson for E.U. foreign policy chief Catherine Ashton. Iranian Foreign Minister Mohammad Javad Zarif told reporters that he was still hopeful about reaching an agreement by the July 20 deadline. But he warned that “major disputes remain” and that the other side should abandon its “excessive demands.” Iran and the P5+1 countries —Britain, China, France, Germany, Russia and the United States — plan to meet for two weeks starting on July 2. The following are excerpted remarks on the June talks held in Vienna, Austria. 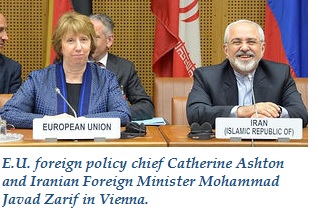 “Still we have not overcome disputes about major issues ... there has been progress, but major disputes remain.
“We feel there are [still] maximalist stances. Iran will not give up the interests and the rights of the Iranian nation in the face of excessive demands.
“The talks were intensive and still continue. The discussions started this morning with my meeting with Mrs. Ashton and now Mr. Araghchi and Ravanchi and the rest of our team are working on the introduction of the text (of the final deal) with Ashton's deputy.
“The introduction deals with the goals, frameworks and mechanisms and the way differences can be resolved. We can't say that we have a common text as in many items there are different views over the content and the way the agreement should be written.
“The opposite side has not attended the talks with the needed preparedness to enter serious negotiations on the basis of the realities.
“We will continue the negotiations as long as they are useful and needed and until achievement of the results.
“Position-taking would not lead to an agreement, we have come here to attain a solution. I am still hopeful about (attaining a) solution because I believe the issue is not complex.
June 20, 2014 to the press
“The Islamic Republic of Iran is ready to reach a solution and has offered logical proposals in this regard but the excessive demands by the other side could thwart the deal and in that case the world would come to know [who made] the negotiations reach an impasse.”
June 26, 2014, according to press
“One of the issues in the comprehensive nuclear accord with the G5+1 is sign up Additional Protocol, but we have not reached that stage in negotiations yet.”
June 27, 2014 according to press
“Iran is ready for a resolution and made rational proposals.
“But the excessive demands of the other party could prevent an agreement.
“At that time the world will know who was responsible for the deadlock in the nuclear negotiations.
“We feel there are still maximalist stances on the other side, which I think should be dropped.”
June 27, 2014 according to press
Iranian Foreign Ministry Spokesperson Marziyeh Afkham

“We have announced that we have entered the talks with seriousness and political will, and no change has occurred in Iran’s intention and willpower regarding acquisition of peaceful nuclear technology.
“We are bracing for professional and tough talks and we hope that an agreement would be reached with the opposite party [showing] realism. Regardless of any conclusion we would reach in the nuclear talks, our national program will follow its normal course.”
June 25, 2014 to the press
Spokesman of the Atomic Energy Agency of Iran Behrouz Kamalvandi
“If the sanctions are removed, animosities will end and all issues pertaining to [Iran’s] nuclear dossier are resolved….we will be ready to sign the Additional Protocol; however, the parliament will be the final decision-maker in this regard.”
June 2014 according to press
E.U. Spokesperson Michael Mann
“We have worked extremely hard all week to develop elements we can bring together when we meet for the next round in Vienna, beginning on 2 July.
“We presented each other with a number of ideas on a range of issues, and we have begun the drafting process.
“E3/EU+3 Political Directors will meet in Brussels next Thursday to continue discussions.”
June 20, 2014 in a statement
“The High Representative is focused on trying to get a deal as soon as possible. The most important thing is that it is a good and robust deal.”
June 25, 2014, during an interview with Nasim Online news agency
Russian UN Envoy Vitaly Churkin
“This is an issue [Iran’s ballistic missile program] that is outside their mandate. The [experts] should not interfere in this extremely sensitive process. And in particular it is unacceptable to pre-judge its outcome.”
June 26, 2014, according to press
“For our part, we will continue to do everything we can for the final closure of the complex issues related to Iran's nuclear program, with Tehran and removal of sanctions.”

Senior Chinese Official Wang Qun
“The fact that (we came up) with this text is progress ... in procedural terms.”
June 20, 2014 to the press
Photo credit: European External Action Service via Flickr