Iran’s leaders have unanimously condemned Israeli air strikes and ground attacks on the Gaza Strip, which began on July 7 and have claimed more than 1,800 Palestinian lives, according to the Gaza health ministry. “Hundreds of innocent men and women and children have been slaughtered… and the United States is not taking action,” Foreign Minister Mohammad Javad Zarif told NBC News. He also noted that Israel receives much of its weapons from the United States. Supreme Leader Ayatollah Ali Khamenei also condemned the West, including the United States and the United Kingdom, for supporting Israel’s policies. He has called for arming Palestinians in the West Bank just as Hamas has been armed.

Top military leaders and officials have praised the Palestinian factions, including Hamas, that have fired rockets into Israel. “The rockets fired by the Palestinians have created such a strange fear among the Zionists, and they are now after a truce,” said Commander of the Army Ground Forces Brig. Gen. Ahmad Reza Pourdastan. Six members of Iran's parliament plan to visit Gaza to show their support at the earliest opportunity. On July 25, thousands of Iranians participated in nation-wide rallies on Qods Day (Jerusalem Day) to show solidarity with Palestinians. Qods Day is held every year on the last Friday of Ramadan.

Meanwhile, U.S. and Israeli officials criticized Iran for its military and financial support to Hamas. “Iran has a responsibility to cease and desist from continuing to supply weapons of war that are fueling this conflict,” a senior U.S. official told the press in a briefing on the Vienna nuclear talks.
Tensions between Palestinians and Israelis were ignited in June, when three Israeli teenagers were kidnapped and killed by Palestinians in the West Bank. Israel claimed that two Hamas militants were responsible for the abduction. Rockets were launched from Gaza the night of June 30, when the three bodies were found, and Israel began carrying out air strikes.
The situation escalated after July 2, when a Palestinian teenager was kidnapped and burned to death in an apparent revenge attack. Hamas, which has reportedly received military and financial support from Tehran, and other extremist groups in Gaza have since fired more than 2,430 rockets at Israel. Israel’s advanced Iron Dome defense system has intercepted rockets and mortars headed toward population centers. So far, one Israeli civilian has been killed by mortar fire. Meanwhile, Israel has fired on more than 1,500 “terror targets” in Gaza, including 735 concealed rocket launchers. Two Israeli civilians, one foreign worker and 64 Israeli soldiers have been killed since Operation Protective Edge began.
The following are remarks by Iranian officials and comments by U.S. and Israeli officials on Iranian involvement in Gaza.
Iran
Supreme Leader Ayatollah Ali Khamenei 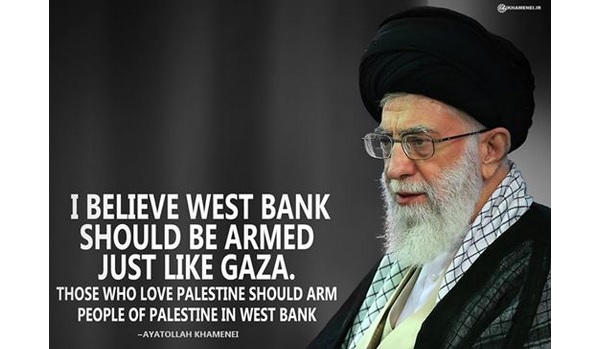 “Since its illegitimate birth since 66 years ago, the Zionist regime has done whatever crime one can imagine against Palestine.
“There is no way to stop the infanticidal Zionist regime but the elimination of this regime; not via war but via referendum.
“Iran suggested a referendum among Christian, Muslim and Jewish Palestinians including the refugees and the ensuing government will replace the Zionist regime.
“In the absence of a referendum, fighting Zionists is realized through resolute and armed resistance of Palestinians which is recognized by international laws.
“Don’t think if it wasn't about Hamas rockets, the Zionists would have relented. There are no weapons in the West Bank, but Israel commits many crimes against its citizens. Israel demolishes houses and farms, cuts people's water and electricity and humiliates the residents in the West Bank.
“The fact that they poisoned and killed people like [Yasser] Arafat who had the utmost cooperation with them shows that ‘peace’ is Israel's trick for more bullying.
“If Palestinian resistance forces stand against Israel, it’s likely that Israel retreats; as they're now doing anything to achieve a truce.
“I believe West Bank should be armed just like Gaza. Those who love Palestine should arm the people of Palestine in the West Bank.
“Of course, it’s a duty for people of the world to have political activity against Zionists. As you see Muslims and non-Muslims stage big protests against Israel.”
July 23, 2014 in a meeting with university students
“The Gaza incidents are utterly disastrous, and the Zionist regime is carrying out the current atrocities by taking advantage of the negligence of the Islamic world.
“The killing of the people of Gaza by the usurping Zionists should spur Islamic governments and nations to resolve their differences and become united.
“We will always stand side by side with the resistance in Palestine and Lebanon. Even in Syria, if there’s any group whose objective is liberating the occupied land, we will back them and support them.
“We know how much our brothers need support. Israel always claims Iran is sending arms to them. What I can say is that Iran wants to see a strong and self-sufficient resistance. Yes, we are sending rockets and military aid, but not the traditional way.”
July 17, 2014 according to the press

Since its establishment, the fake regime of #Israel has always taken its course via terror & crime. #GazaUnderAttack pic.twitter.com/pj4naI9J17

Today a rabid dog in the region is doing genocide& infanticide in #Gaza.Leaders of this crime should be condemned and punished.#KillerIsrael

No1 in world considers US non-complicit in the genocide by the usurper, beastly & pagan Zionist regime in #Gaza;US is now in a weaker stand.

Palestinian's logic abt truce is correct.They say predatory #Israel can't do any crimes it wants& then return to pre-war days w/out forfeit.

As Palestinians say, there should be a compensation for all these #crimes & an end to #Gaza siege is the least Palestinians deserve.

What's happening in Gaza is one of the biggest tragedies of our time! Stop the aggression and stop the killing! #GazaUnderAttack

Commander of Basij militia Brig. Gen. Mohammad Reza Naqdi
“The Iranian nation's aids to the Palestinian people recognizes no boundary and whatever they need, it will be included in our aids.
“As Supreme Leader of the Islamic Revolution [Ayatollah Ali Khamenei] has stressed, we are fully ready to provide any health and hygiene aid as much as the ground is prepared; the Iranian nation is also ready to supply the Palestinians with food stuff and arms aid.”
Aug. 5, 2014 according to the press
United States
Senior administration official in Vienna, Austria
“On Gaza, the one point I’d like to underscore is that Iran has a longstanding record of supplying weapons, rockets to various terrorist groups in Gaza, including Hamas; that those rockets are being used to fire at civilian areas; and that Iran has a responsibility to cease and desist from continuing to supply weapons of war that are fueling this conflict. And any opportunity that we get to communicate that message to them, we will take.”
July 12, 2014 to the press
House Foreign Affairs Committee Chairman Ed Royce
“Who is the enabler for Hamas? Where do they get those rockets? It’s Iran.”
Use of M-302 rockets “which Iran transferred to Hamas [are] a good reminder in terms of the nature of the regime.”
July 11, 2014 to the press
“Iran has long provided material support to Hamas and Palestinian Islamic Jihad, including assistance that has enabled these terrorist organizations to produce longer-range rockets capable of striking Tel Aviv and Jerusalem.”
July 14, 2014 according to press and H. Res. 657

“Iran is publicly, in their own newspapers, touting the fact that they are helping to militarize Hamas in the Gaza Strip. They’re supporting Hezbollah in the fight in Syria and supplying Hamas in the Gaza Strip with weapons.”
July 28, 2014 according to press
“That's what's so frustrating with the administration. All of this works together. You can't just pick and choose one particular region; it has to work in concert. So when you free up $2.8 billion for Iran, when they're already cash strapped because of sanctions, that means they can continue to do bad activities in the Gaza Strip, including we believe at least missile components.
“Think about how obscene that is, the hundreds of millions of dollars they've had over a decade. Twenty percent of the people in Gaza Strip aren't connected to a water source. Ninety percent of all the water there doesn't meet international standards. But they've got, I think the Israelis disclosed, 35 tunnels. So they're diverting legitimate money. And you have Iran that is aligned into this particular interest in a way that's very, very dangerous".
July 27, 2014 according to press
Israel
Prime Minister Benjamin Netanyahu
“Today in Vienna, the foreign ministers of the major powers are discussing the question of dealing with Iran's nuclear program. I would like to remind them Hamas and Islamic Jihad are being financed, armed and trained by Iran. Iran is a major power of terrorism that finances, arms and trains the terrorist organizations we are fighting against. This Iran cannot be allowed the ability to produce fissile material for nuclear weapons. If this happens, the things we are seeing around us and the things that are happening in the Middle East will be far worse.”
July 14, 2014 according to press
Israeli Defense Forces spokesperson Lt. Col. Peter Lerner
“We know that Hamas has been training with Iranian help, and its fighters have been attending Iranian schools. They are well trained, well supplied and disciplined.”
July 21, 2014 according to press
Ambassador to the United States Ron Dermer
“Iran continues to do everything it can to push rockets into Gaza”.
July 11, 2014 according to press
Palestinian Islamic Jihad is “a wholly-owned subsidiary of Iran.”
“We need to ensure that the worst actors don’t get the worst weapons.”
July 22, 2014 according to press
Ambassador to the United Nations Ron Prosor
“Every single time the international community calls for a ceasefire, we cease and Hamas fires. Make no mistake - Hamas is not working alone. It is funded by Qatar and Iran. Every rocket flying out of Gaza could bear the imprint ‘Courtesy of Tehran’.”
July 28, 2014 according to the press
Click here for more information on Iran and the Palestinians.