The following fact sheet was published by Iran Fact File, a project of the James Martin Center for Nonproliferation Studies at the Monterey Institute of International Studies.

The IR-40 is an as yet incomplete Iranian heavy water moderated research reactor with a declared power rating of 40 MW. The reactor was under construction until January 20, 2014 but work has been stopped under the terms of the Joint Plan of Action agreed to by Iran, the United States and other world powers (see IranFactFile fact sheet on Joint Plan of Action). Research reactors can be used for a number of legitimate civilian goals, including the production of medical isotopes. However, such facilities can also be used to produce plutonium for use in nuclear weapons. While the full design details of the IR-40 are not publicly available, what is known suggests that the IR-40 reactor may be able to produce about 10 kg of plutonium per year if and when it is completed and enters into operation. However, Iran is not known to possess the facilities needed to separate plutonium from spent nuclear fuel, a step that would be needed if this material were to be used in nuclear weapons. 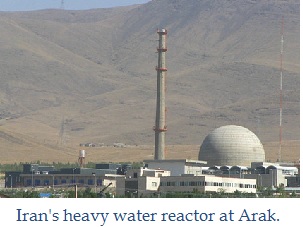