On April 9, Supreme Leader Ayatollah Ali Khamenei outlined six red lines on nuclear talks in an address to the Atomic Energy Organization of Iran. The semi-official government website NuclearEnergy.ir pulled out his six points and distributed the graphic below. The following are excerpts from his speech marking National Nuclear Technology Day. 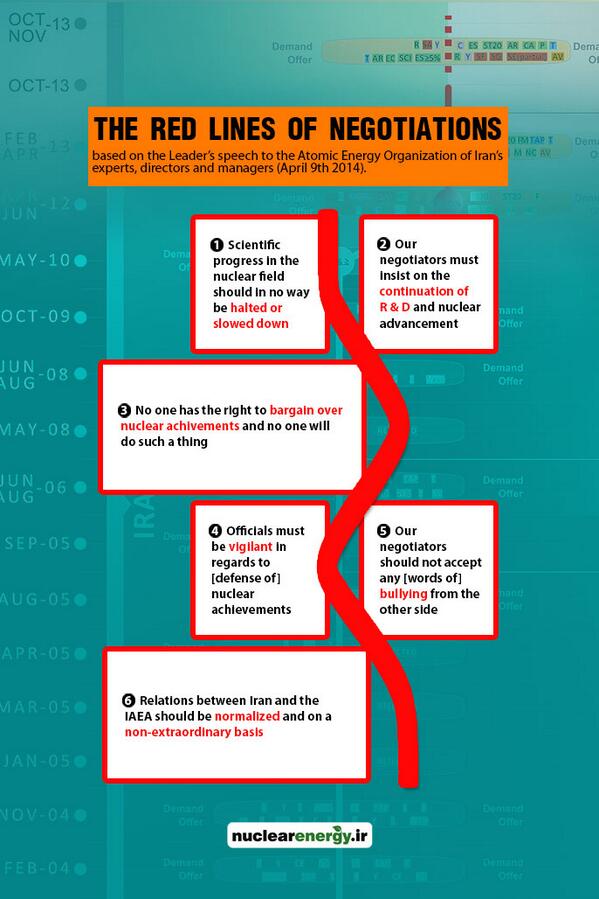 Address to the Atomic Energy Organization of Iran
The purpose of agreeing with these negotiations was to change the atmosphere of hostility that the camp of arrogance [the West] has created against Iran. These negotiations should continue, but everyone should know that despite this, the activities of the Islamic Republic in the area of nuclear research and development will not stop in any way. None of the nuclear achievements of the country can be given up. Besides, the relations of the International Atomic Energy Agency with Iran should be normal and ordinary relations.

Another plot that global arrogance [the West] has tried very hard to implement against the Islamic Revolution is to influence the major policies of Iran and to shatter the willpower of the political management of the country. But the camp of arrogance has failed to do this until today and by Allah's favor, it will continue to fail in the future.
The nuclear issue is an example of this, through which they tried to create an environment against the Islamic Republic and to spread lies. Their goal is to preserve the international environment against Iran with this excuse. This was why there was an agreement with the new plan of the administration for the nuclear issue. The purpose of this agreement was to remove the international environment against Iran, to seize the initiative from the other side and to reveal the truth for public opinion in the world. Of course, these negotiations do not mean that the Islamic Republic will compromise its scientific-nuclear movement.
The nuclear achievements that have been made so far are, in fact, a message to the people of Iran that they can take the paths which lead to the lofty peaks of science and technology. Therefore, this scientific-nuclear movement should not be stopped in any way or slowed down.
None of the nuclear achievements of the country can be given up. No one has the right to trade these achievements and no one will do this.
At that time [a few years ago], a formula was devised for producing fuel. But the Americans created obstacles in the way of this process. This was contrary to what they had said to their friends in the regions and to a South American country - and these people believed what the Americans said. The Americans foolishly thought that they had put Iran in dire straits.
At that time, I said that America does not want to solve this issue. Later on, everyone saw that when a nuclear agreement was in its final stages, the Americans did not allow it to be finalized.At that time, westerners began to ridicule our experts who had announced that they have the capability to produce fuel plates for the Tehran research reactor. But our youth accomplished this feat in less than the arranged time and as a result, the enemies were astonished.
If some people think that the price of nuclear achievements has been sanctions and pressures, we should remind them that even before the nuclear excuse, sanctions and pressures existed against Iran.
During the time when there was no nuclear excuse, a western court put Iran on a trial in absentia. Of course, in the present time, they do not have the courage to do this because of the national power of the country. Sanctions and pressures do not exist because of the nuclear issue. Rather, they are opposed to the independent identity - which originates from Islamic faith and belief - and the future prospects of the people of Iran and the Islamic Republic and to their refusal to be bullied by anyone.
Therefore, if it is said that sanctions and pressures are the price that we have paid for our nuclear achievements, this is not true because even if sanctions did not exist, they would make another excuse, as the Americans bring up the issue of human rights in today's negotiations.
Even if the issue of human rights is resolved, they will find another excuse. Therefore, the only way is to continue our path of progress with complete power and to stand up against their bullying.
The negotiators of the country should not give in to any bullying of the other side. Besides, the relations of the International Atomic Energy Agency with Iran should be normal and ordinary relations.