On September 27, President Barack Obama revealed that he had a phone conversation with Iranian President Hassan Rouhani. “The two of us discussed our ongoing efforts to reach an agreement over Iran’s nuclear program,” Obama said at a White House briefing. The exchange was the first direct communication between an American and Iranian president since the 1979 revolution. 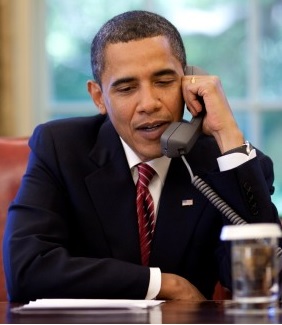 Resolving the dispute over Tehran’s controversial nuclear program could “serve as a major step forward in a new relationship between the United States and the Islamic Republic of Iran,” Obama said. The two presidents spoke while Rouhani was in a car on his way to the airport. Obama communicated his deep respect for the Iranian people and emphasized the “unique opportunity to make progress with the new leadership in Tehran.” He also apologized for the horrendous New York traffic and wished Rouhani a safe journey home.
President Rouhani told his counterpart that they can “rapidly solve” the nuclear dispute with sufficient political will. “We’re hopeful about what we will see from the P5+1 [six major world powers] and your government, particularly in the coming weeks and months,” he said. “Have a good day Mr. President,” Rouhani said. Obama wished him well in Farsi.
Rouhani’s office immediately tweeted excerpts from the conversation and posted a summary on the president’s website. The following are tweets from @HassanRouhani followed by Obama’s remarks and Iran’s summary of the conversation.

President Barack Obama
Just now, I spoke on the phone with President Rouhani of the Islamic Republic of Iran.  The two of us discussed our ongoing efforts to reach an agreement over Iran’s nuclear program.  I reiterated to President Rouhani what I said in New York -- while there will surely be important obstacles to moving forward, and success is by no means guaranteed, I believe we can reach a comprehensive solution.
I’ve directed Secretary Kerry to continue pursuing this diplomatic effort with the Iranian government.  We had constructive discussions yesterday in New York with our partners -- the European Union, the United Kingdom, France, Germany, Russia and China -- together with the Iranian Foreign Minister.  Going forward, President Rouhani and I have directed our teams to continue working expeditiously, in cooperation with the P5-plus-1, to pursue an agreement.  And throughout this process, we’ll stay in close touch with our friends and allies in the region, including Israel.
We’re mindful of all the challenges ahead.  The very fact that this was the first communication between an American and Iranian President since 1979 underscores the deep mistrust between our countries, but it also indicates the prospect of moving beyond that difficult history.
I do believe that there is a basis for a resolution.  Iran’s Supreme Leader has issued a fatwa against the development of nuclear weapons.  President Rouhani has indicated that Iran will never develop nuclear weapons.  I have made clear that we respect the right of the Iranian people to access peaceful nuclear energy in the context of Iran meeting its obligations.  So the test will be meaningful, transparent, and verifiable actions, which can also bring relief from the comprehensive international sanctions that are currently in place.
Resolving this issue, obviously, could also serve as a major step forward in a new relationship between the United States and the Islamic Republic of Iran -- one based on mutual interests and mutual respect.  It would also help facilitate a better relationship between Iran and the international community, as well as others in the region -- one that would help the Iranian people fulfill their extraordinary potential, but also help us to address other concerns that could bring greater peace and stability to the Middle East.
A path to a meaningful agreement will be difficult, and at this point, both sides have significant concerns that will have to be overcome.  But I believe we’ve got a responsibility to pursue diplomacy, and that we have a unique opportunity to make progress with the new leadership in Tehran.  I also communicated to President Rouhani my deep respect for the Iranian people.
As I said before, this comes on the same day that we can accomplish a major diplomatic breakthrough on Syria, as the United Nations Security Council will vote on a resolution that would require the Assad regime to put its chemical weapons under international control so they can ultimately be destroyed.  This binding resolution will ensure that the Assad regime must keep its commitments, or face consequences.  We’ll have to be vigilant about following through, but this could be a significant victory for the international community, and demonstrate how strong diplomacy can allow us to secure our country and pursue a better world.
President Hassan Rouhani’s Official Website 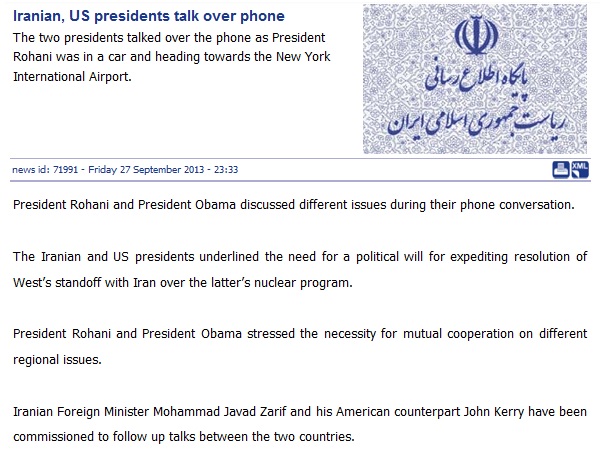 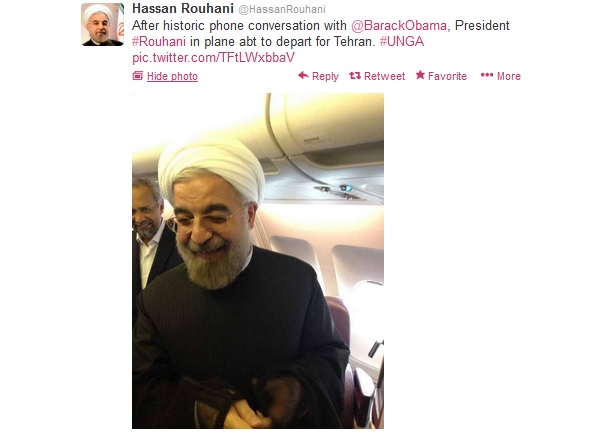