Robin Wright
I had breakfast with new Iranian President Hassan Rouhani this morning. He is personable and a striking departure from President Ahmadinejad. He entered the room with presidential flair; he wore a white turban and robes. (I had been early so I had to go through both American and Iranian security. I asked one of the young American Secret Service guys if he’d seen Rouhani—and if so, what he thought of him. He thought about it a few seconds and, with a smile, said he was impressed with Rouhani’s very neat beard. It is indeed quite smartly trimmed.) 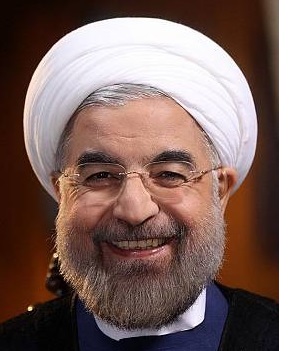 Although much of the discussion was off-the-record, he made several notable comments on the record:

On The-Handshake-that-didn’t-happen with Obama: The United States proposed the idea two days earlier and “we did were not opposed,” Rouhani said. “There are really no problems with shaking Obama’s hand or negotiating with him. But it’s more important that we have a plan of action to ensure that those negotiations lead to the conclusions that we want… We wanted to know where the negotiations might lead. The two countries have not talked for the last 35 years so if we don’t take our first steps carefully…We may not attain the mutual goals we seek.” He called the handshake “a symbolic issue.”

Yet on his new pen pal Barack Obama, he noted that they are both committed to continuing the correspondence begun by Obama after Rouhani’s election. “We will continue exchanging letters.” So a dialogue has begun, albeit not in person. He also called for expanding relations between the Iranian and American peoples to help build confidence. He actually encouraged Americans to visit. (Needless to say, I asked him for a visa as he was walking out.)
In a major reversal from his predecessor, Rouhani condemned the Holocaust. He called it a “massacre” against the Jews. “It can’t be denied that the Nazis carried out a massacre, a crime against the Jews.” And then he quoted the Koran, which says that the killing of any innocent is immoral – and is as if the entire human race is killed. He went on to add, however, that the victimization of one group of people does not justify the victimization of another group, a clear reference to the Palestinians.
On the Big Issue – Iran’s controversial nuclear program – Rouhani insisted that Iran intends to be “more transparent” about its facilities. He was not specific and of course this is where Tehran really has a lot to prove! But he claimed that the issues could actually be addressed, questions about Iran’s facilities answered, and resolution achieved in the not too distant future. “Whether it’s 20 percent enrichment or 5 percent enrichment, all of those can be placed on the table and examined,” Rouhani said. “The endgame is the removal of everyone’s concerns, and the restoration of Iran’s rights” to enrich uranium.
Needless to say, the US may think otherwise. And one of the big ironies is that both President Obama and President Rouhani would have a hard time selling any deal that the other country would buy to their own legislatures. In both countries, hardliners have a pivotal role and significant numbers in Congress/Parliament.
But we can only hope something comes of this effort. I shudder to think about the alternatives.
Robin Wright spoke about U.S.-Iran relations immediately after the breakfast on The Diane Rehm Show. Click here to listen.