President Barack Obama confirmed in a televised interview that he has exchanged letters with President Hassan Rouhani. This is the most significant direct communication between the United States and Iran in years— and at the highest level since Rouhani’s election in June. The revelation comes just a week before the two men will both speak at the U.N. General Assembly on September 24. 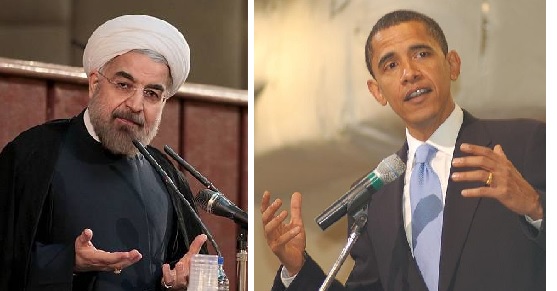 President Obama “indicated that the U.S. is ready to resolve the nuclear issue in a way that allows Iran to demonstrate that its nuclear program is for exclusively peaceful purposes," said White House spokesman Jay Carney on September 18. "The letter also conveyed the need to act with a sense of urgency to address this issue because, as we have long said, the window of opportunity for resolving this diplomatically is open, but it will not remain open indefinitely," Carney said.
The exact timing and origin of the exchange – first reported in Iran – are still unknown. Iranian Foreign Minister Mohammad Javad Zarif first acknowledged the existence of private messages on September 9 during a visit to Iraq. He implied that the messages were primarily about Syria, Iran’s closest ally in the Middle East. Syria, ironically, may be bringing Washington and Tehran together. Tabank news website and Fars News Agency reported that Iran replied to Obama’s proposal to “turn a new page” in relations. Iranian agencies claimed that President Obama passed the letter to Rouhani through Omani Sultan Qaboos bin Said during his visit in late August.
In Washington, National Security spokeswoman Bernadette Meehan was asked about the letters but neither denied nor acknowledged their existence. She echoed President Obama’s previous remarks on Iran. Should President Rouhani’s government “choose to engage substantially and seriously to meet its international obligations and find a peaceful solution to this [nuclear] issue, it will find a willing partner in the United States,” Meehan told the Los Angeles Times in early September.
Several days later, President Obama acknowledged the letter exchange in an interview with ABC that also covered Syria. “I think what the Iranians understand is that the nuclear issue is a far larger issue for us than the chemical weapons issue, that the threat against Israel that a nuclear Iran poses, is much closer to our core interests,” Obama said in the interview that aired on September 15. The following are excerpts.
GEORGE STEPHANOPOULOS:
Have you reached out personally to the new president?
PRESIDENT BARACK OBAMA:
I have.  And he’s reached out to me.  We haven’t spoken– directly.  But…
GEORGE STEPHANOPOULOS:
Letters.
PRESIDENT BARACK OBAMA:
Yeah.  And I think what the Iranians understand is that– the nuclear issue – is a far larger issue for us than the chemical weapons issue [in Syria], that the threat against Israel, that a nuclear Iran poses, is much closer to our core interests, that a nuclear arms race in the region is something that would be profoundly destabilizing.
And so my suspicion is that the Iranians recognize they shouldn’t draw a lesson that we haven’t struck, to think we won’t strike Iran.  On the other hand, what they should draw from this lesson is that there is the potential of resolving these issues diplomatically.
GEORGE STEPHANOPOULOS:
You think they’re there?  You think they believe that?
PRESIDENT BARACK OBAMA:
I think they recognize, in part, because of the extraordinary sanctions that we placed on them, that the world community is united when it comes to wanting to prevent a nuclear arms race in the region.  And you know, negotiations with the Iranians is always difficult.  I think this new president is not gonna suddenly make it easy.  But you know, my view is that if you have both a credible threat of force, combined with a rigorous diplomatic effort, that, in fact you can strike a deal. And I hold out that hope.
Obama revealed the private communication at a critical juncture, barely a week before the U.N. General Assembly opening. Iran is also set to meet with the U.N. nuclear watchdog on September 27 in Vienna. And E.U. foreign policy chief Catherine Ashton hopes to schedule a new round of nuclear talks between Iran and the world’s six major powers — the United States, Britain, China, France, Germany and Russia.
“On the nuclear issue, the endgame should be a win-win,” Rouhani told state television in early September. “A win-lose game is meaningless. We are ready for this game. This job will begin in New York.” The Iranians have planned an ambitious schedule of events around the U.N. General Assembly. But not all of the dates and times have been publicized.
• September 24: President Rouhani is scheduled to address the general assembly just hours after Obama’s speech.
• September 26: Rouhani is set to address the Asia Society, global non-profit that aims to forge closer ties between Asia and the West.
• Foreign Minister Zarif and E.U. foreign policy chief Catherine Ashton are scheduled to discuss the next round of nuclear talks. Ashton hopes to set a date for the talks.
• British Foreign Minister William Hague’s office has indicated that he may meet Zarif. The meeting would be the first direct diplomatic encounter in two years. Britain withdrew its Tehran embassy after Iranian security forces reportedly allowed mobs to storm the compound in November 2011.
• Iran’s delegation will almost certainly meet with the Russian one to discuss Syria and nuclear talks.
Photo credits: President Barack Obama By Elizabeth Cromwell (http://chesh.org/barack/DSC_0010.JPG) [GFDL (http://www.gnu.org/copyleft/fdl.html) or CC-BY-SA-3.0 (http://creativecommons.org/licenses/by-sa/3.0/)], via Wikimedia Commons and President Hassan Rouhani via President.ir