The Iran Deal: A Humanizing Breakthrough

In 1981, I stood at the foot of the plane that flew the 52 Americans held hostage 444 days in Iran to freedom in Algiers. They were all pasty-faced and captive-weary as they disembarked into the cold January night. It was after midnight. Tehran had delayed their departure until after Jimmy Carter was out of office, one final slap at the president who had propped up the last shah until the end and later welcomed him into the United States.
Weeks of tough negotiations in Algiers to free the hostages had been complicated because Iranians and Americans did not meet face-to-face. They mediated (in three languages) through the Algerians. 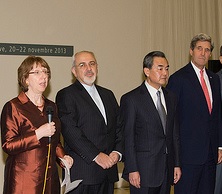 So the recent talks in Geneva between Iran and the world’s six major powers produced far more than a long-elusive deal to restrict Iran’s nuclear program. The new diplomacy also produced real human contact. U.S. and Iranian diplomats have spent more time together over the past three months than in the entire three decades since the American Embassy takeover. They are learning how to talk to each other all over again—often in the same language. Geneva laid the cornerstone to defuse 34 years of both overt and covert confrontation over a host of other issues too. The interaction may even help end the Iran jinx that has tainted or tormented all six American presidents since the 1979 revolution.
The hostage crisis cost Jimmy Carter a second term. The Reagan administration was shamed by clumsy secret diplomacy during the Iran-Contra scandal, which was initiated to free a new set of American hostages in Beirut but which ended up with the indictment or dismissal of top White House officials. The first Bush administration’s stab at Arab-Israeli diplomacy, centered on the 1991 Madrid peace conference, was matched by deepening ties between Iran and Palestinian rejectionists.
The Clinton administration considered military retaliation against Iran after the 1996 attack on a U.S. Air Force facility in Khobar, Saudi Arabia killed 19 Americans and injured another 350. A Shiite group with Iran ties was suspected. The second Bush administration’s “axis of evil” language sabotaged collaboration in Afghanistan after the Taliban’s ouster in 2001, while the Iraq and Afghanistan invasions inadvertently strengthened Tehran’s hand by toppling its two biggest regional rivals.
In contrast, Secretary of State John Kerry and Iranian Foreign Minister Javad Zarif were photographed laughing together across the negotiating table in Geneva. In the wee hours of November 24, they shook hands—more than just politely—after signing an agreement opening the way for six months of even more intensive contact. No one noted that Kerry wore a (bright red) tie, but Zarif didn’t, in deference to the revolutionary dress code banning ties as symbols of Western influence—the kind of colorful anecdote once trotted out to underscore deep differences.
Debate will rage from Capitol Hill to the Persian Gulf over specifics of the interim deal. Many both at home and abroad are dissatisfied. Some may try to scuttle it. The volume will almost certainly go up as diplomacy intensifies.
But the reality is that Iran’s nuclear program is now too advanced to either bomb or sanction totally out of business. A deal should have happened a decade ago when Iran had less than 200 centrifuges to enrich uranium, the fuel for both peaceful nuclear energy and the world’s deadliest weapon. Now it has near 19,000. Both sides were too stubborn back then.
The conventional wisdom claims Iran came to the negotiating table under pressure from unparalleled economic sanctions. True. But the unacknowledged truth is that the outside world also went into diplomacy under pressure from Iran’s growing capabilities. Otherwise, the world’s six major powers could have just kept squeezing the Islamic Republic. Tehran also now has nuclear knowledge that can’t be bombed out of existence.
So, ultimately, even a military strike would require diplomacy to prevent Tehran from rebuilding. The core issue is as much Iran’s long-term calculations as its capabilities.
Diplomacy is not only about preventing war. It’s also about healing. President Nixon’s diplomacy ended 30 years of deadly tensions with China, which included Beijing’s arming, aiding and sending troops to North Vietnam. President Clinton resumed relations with a reunited Vietnam 20 years after the United States lost more than 58,000 lives in a war to keep the Communists from consuming the south.
The sprawling American Embassy compound in Tehran is not likely to reopen anytime soon. But in pushing for a nuclear deal, Geneva started the long and painful healing that could eventually alter Tehran’s calculations—not only about its nuclear program.
This article first appeared in Time.