Rouhani at 100 Days: Easing Up is Hard to Do

The honeymoon is over. President Hassan Rouhani marks 100 days in office on November 12, which is also his birthday. During his campaign against five rivals, Rouhani distinguished himself as the people’s champion and pledged to create a government of “prudence and hope.” And shortly after his election, Rouhani bluntly told his fellow clerics, “A strong government does not mean a government that interferes and intervenes in all affairs. It is not a government that limits the lives of people.” 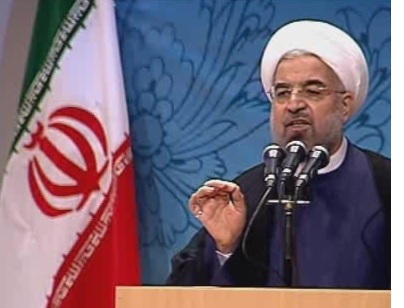 “We have to give people a free hand,” Rouhani said. “We shouldn't intervene so much in people's private lives and culture.”
But for all his lofty promises, little has tangibly changed so far. Indeed, Iran’s new president faces growing opposition from hardliners over his promise to ease rigid government controls on Iranian society.
“People in all fields have been struggling,” Culture Minister Ali Jannati told Ghanoon newspaper shortly before his appointment. “Our friends in cinema, literature, music, and the press have all been dealing with the same issues. I imagine that ultimately this new government will have to make changes at a very basic level.”
Television
After his election, Rouhani pledged to ease up on television censorship. In an English-language tweet, the new president even chastised IRIB, the state-controlled television, for its poor news coverage. “When IRIB airs the birth of a panda in China but nothing about unpaid workers protesting, it is obvious that the people and youth will ignore it,” Rouhani tweeted.
At a September 26 address to the Asia Society, Rouhani said his government’s objective “is to provide free access to information for the people…Presently even Iranian villages have access to satellite [dishes]. All you have to do is to look at their rooftops.”
Yet just two days later, a Revolutionary Guards unit in Shiraz used a tank to crush 800 confiscated satellite dishes. Dishes have long been illegal in the Islamic Republic because they bring in foreign programs—including news, soap operas, music, talk shows and films­—but millions have defied the law and hidden dishes on their rooftops. 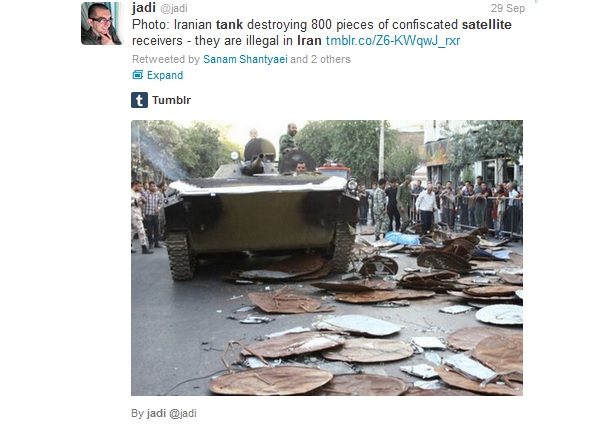 New Culture Minister Ali Jannati criticized the crackdown. “Prohibiting satellites and jamming their signals won’t be effective,” he said on November 5. “We need to consider content that the viewers are attracted to.” But the ban has not been lifted.
Cinema
Rouhani, who is a self-described movie buff, also pledged to lift restrictions on Iran’s once vibrant movie industry. “We must allow cinema organizations to be free,” Rouhani said in a television interview during the campaign. “Let’s leave the cinema to those who know cinema, to filmmakers, artists.” Five weeks after his inauguration, his culture ministry reopened the House of Cinema, an alliance of motion picture guilds that had been shut down since January 2012.
But the new government also has not yet loosened longstanding controls, which include approval of movie scripts and allocation of film supplies controlled by the culture ministry.
Social Media
Rouhani opened one Facebook and two Twitter accounts—in English and Farsi—for his presidential campaign. Shortly after his election, he said that internet filtering was futile and pledged to minimize censorship. “In the age of digital revolution, one cannot live or govern in a quarantine,” he said.
In a highly unusual exchange, Rouhani had a Twitter conversation with Twitter co-founder Jack Dorsey in October. Dorsey sent a tweet to Rouhani’s English-language account asking if Iranian citizens could see Rouhani’s posts. Referring to his CNN interview, the Iranian president replied, “Evening, @Jack. As I told @camanpour, my efforts geared 2 ensure my ppl'll comfortably b able 2 access all info globally as is their #right.

The new culture minister also told reporters on November 5 that Facebook and other social networking sites should be “accessible for everyone…We must reduce the filtering of internet websites to a minimum.” Foreign Minister Mohammad Javad Zarif is particularly active on Facebook. He has 550,000 followers and has engaged in unprecedented debates through detailed accounts of his work.
Yet Twitter and Facebook have remained blocked for ordinary Iranians. They can only reach personal accounts to post or connect by going through foreign servers. Authorities have reportedly announced that some 5 million websites are blocked. In July 2013 alone, 67 internet cafes were reportedly shut down, according to the U.N. special rapporteur on human rights in Iran.
Music
The culture ministry has indicated that it may lift the ban on women singing solo in front of mixed audiences, which has been forbidden since the 1979 revolution. “Some religious authorities have said that so long as solo singing by women does not lead to corruption, it is admissible,” Jannati reportedly said in October. In late October, an all-female folklore band received official permission to perform at one of Tehran’s top halls.
But the government’s action was the exception rather than a new rule. And females are still nervous about potential repercussions. “Why should I be kept under so much stress before my performance?” singer Jivad Sheikholeslami told the Financial Times. “If the female voice was against religion, God would have created us mute.”
Media
Shortly after his election, Rouhani criticized the state-controlled media. “There are a number of media in our country, but there is no variety,” he said. In a pointed reference to the closure of 40 newspapers between 2009 and 2013, Rouhani also said that good “government receives its legitimacy from the support of the people [and] isn’t afraid of a free media.”
Press censorship seemed to loosen during the first three months of Rouhani’s presidency. In August, a few publications banned during Mahmoud Ahmadinejad’s presidency were allowed to publish again. Reformist papers also took new risks. Shargh ran a front-page interview in September with Alan Eyre, the State Department’s top Iran watcher. 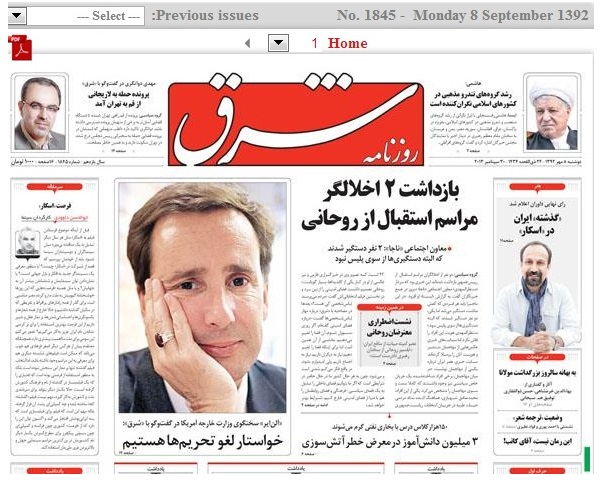 Yet the judiciary continues to clampdown on the media, especially reformist publications. In October, the judiciary shut down popular reformist daily Bahar for a controversial article on early Islamic leadership and then arrested its editor Saeed Pourazizi. He was released on $80,000 bail.
In November, the judiciary also blocked the reopening of reformist paper Ham-Mihan, which was closed in 2007 during Ahmadinejad’s presidency. Judiciary chief Ayatollah Sadegh Larijani warned on October 30 that the courts will continue to "act with determination against those who falsify the history and try to undermine the fundamentals of the regime."
Books
During the June 5 presidential campaign debate, Rouhani openly warned his rivals that “censorship kills creativity.” And after his inauguration, his new culture minister criticized the heavy censorship imposed on books during Ahmadinejad’s presidency. “Under such methods, censors would have rejected even the Koran, and would have argued that some of the words in it are against public morality,” Jannati said on October 8.
Yet the government must still approve all manuscripts for publication. In October, more than 200 writers, poets and translators wrote an open letter to Jannati appealing for an end to censorship. They vowed to take responsibility for the consequences of anything they wrote. The letter was published by many publications, including Bahar, the newspaper that was subsequently banned.
Hanif Z. Kashani is a consultant for the Woodrow Wilson International Center for Scholars Middle East Program.
Robin Wright has traveled to Iran dozens of times since 1973. She has covered several elections, including the 2009 presidential vote. She is the author of several books on Iran, including "The Last Great Revolution: Turmoil and transformation in Iran" and "The Iran Primer: Power, Politics and US Policy." She is a joint scholar at USIP and the Woodrow Wilson Center.
Online news media are welcome to republish original blog postings from this website in full, with a citation and link back to The Iran Primer website (www.iranprimer.com) as the original source. Any edits must be authorized by the author. Permission to reprint excerpts from The Iran Primer book should be directed to permissions@usip.org