Iran Sanctions: Which way out?

The United States has imposed several layers of sanctions against Iran—for widely diverse reasons—dating back to the 1979 revolution. Tehran now wants relief from sanctions as part of any diplomatic deal on its controversial nuclear program. But lifting sanctions is often harder than imposing them—and varies depending on the issues, origins and methods imposed.
What types of sanctions has the United States imposed on Iran?
Sanctions have been the policy tool of choice used by six presidents to deal with Iran. Since the 1979 revolution, the White House has issued 16 executive orders and Congress has passed nine acts imposing punitive sanctions on Iran in four waves.
The first wave of U.S. sanctions, from 1979 to 1995, was a response to the U.S. embassy hostage crisis and Tehran’s support for extremist groups in the region.
The second wave of sanctions, from 1995 to 2006, sought to weaken the Islamic Republic by targeting its oil and gas industry and denying it access to nuclear and missile technology. U.S. sanctions also targeted any company in a third country that invested in Iran’s energy sector, a move to compel allies to adopt a unified stance against Iran.
The third wave, from 2006 to 2010, was imposed chiefly due to concerns over Tehran’s nuclear ambitions, but also included punitive measures for Iran’s human rights violations. Sanctions targeted almost every major chokepoint in Iran’s economy.
The latest wave of sanctions since 2010 includes some of the toughest restrictions the United States has ever imposed on any country. They target Iran’s Central Bank and its ability to repatriate oil revenues  as well as many transportation, insurance, manufacturing and financial sectors.
The first two waves of sanctions were unilaterally imposed by Washington. But the last two included similar measures imposed by U.S. allies and the United Nations, generating almost a global sanctions regime against Iran.
What would the United States need to do to lift sanctions? 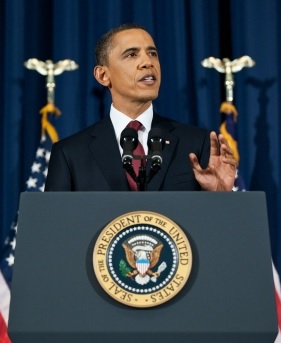 The standard for lifting U.S. sanctions is high. The president could nullify the White House executive orders imposed over the years. But nearly 60 percent of these sanctions have also been codified into law by Congress, which puts amending or repealing sanctions beyond the president’s control. Congress would also have to take action.
For example, executive orders banning U.S. trade with Iran –under Executive Orders 12957, 12959 and 13059-- were subsequently written into the law when Congress passed the Iran Freedom Support Act in 2006 and the Comprehensive Iran Sanctions, Accountability, and Divestment Act in 2010. Similarly, sanctions on Iran’s energy and petrochemical sector under Executive Order 13590 and human rights violators under Executive Order 13606 were subsequently codified into law through the Iran Threat Reduction and Syria Human Rights Act of 2012.
The president could still exercise his waiver authority to exempt countries, entities and individuals from sanctions. He could also mandate greater flexibility in determining violations and enforcing penalties. The Clinton and Bush administrations opted for the latter option and never determined any country in violation of U.S. sanctions, which could have damaged relations with US allies.
What steps would Iran have to take to get sanctions lifted?
Sanctions have become so extensive and so intricately woven that the United States will probably have a hard time offering significant or tangible relief unless Iran reverses major aspects of its domestic and foreign policies. The same applies to the 34-year-old state of emergency on Iran, which gives the president broad powers to unilaterally impose sanctions or other punitive measures.
The 16 executive orders and nine Congressional acts are also not tied only to the nuclear issue. More than 80 percent of the sanctions are linked to Iran’s broader foreign or domestic policies. As such, not all have the same standards to be lifted.
On Terrorism: Restoration of U.S.-Iran trade relations would first require that the United States remove Iran from the list of state sponsors of terrorism, which Tehran has been on since the list was created in the 1980s. And the requirements are stiff. Tehran would notably have to cut ties to Hezbollah, a Lebanese Shiite militia and political party that Tehran helped create in the early 1980s, as well as several other movements that use violence.
Tehran would also have to provide assurances – and proof -- that it had abandoned international terrorism and support for extremist groups. The White House would then have to certify to Congress that Iran had not provided support for terrorism for at least six months, timing that could delay implementation of any diplomatic deal. Congress could block Iran’s removal from the list through a joint resolution , which would in turn be subject to a presidential veto. Congress could override the veto with a two-thirds majority, however.
On Human Rights: Ending sanctions imposed for human rights violations under the Comprehensive Iran Sanctions, Accountability, and Divestment Act would require Iran to take several steps, including:
•  unconditional release of all political prisoners;
•  conducting a transparent investigation into the killings, arrests and abuse
of protestors after the disputed 2009 presidential election;
•  ending human rights violations;
•  and establishing an independent judiciary.
On the Nuclear Program: The United States has no clear criteria for removing these sanctions. The basic demands by the world’s six major powers include:
•  halting all enrichment of uranium up to 20 percent,
•  neutralizing the current stockpile of uranium enrich to 20 percent
•  mothballing the new enrichment facility build into the mountains of Fordo.
•  accepting maximum level of transparency and intrusive inspections,
•  resolving all the outstanding issues with the International Atomic Energy
Agency,
•  and abiding by the six UN Security Council resolutions demanding
suspension of uranium enrichment and reprocessing activities.
But most US sanctions are multipurpose. For example, termination of measures under the Iran Sanctions Act , which is at the core of U.S. sanctions, requires:
•  that the president to certify that Iran has ceased efforts to design, develop or
acquire nuclear, chemical and biological weapons, as well as ballistic missile
technology;
•  that Tehran has been removed from the U.S. list of state sponsors of
terrorism;
•  and that Iran poses no significant threat to U.S. national security interests or
its allies.
What obstacles would the White House face in lifting sanctions from Congress, political lobbies, public opinion or other players? Lifting U.S. sanctions could be complicated by politics, particularly discordant views between the White House and Congress. Some lawmakers seem less interested in a diplomatic resolution--or less convinced of its feasibility. They are not swayed by the views of U.S. allies. Others would actually prefer to impose additional sanctions.
So in Washington’s highly politicized climate, Congress may not easily defer to the president on sanctions relief, especially given powerful lobbies on the issue.
Easing sanctions may also not automatically alter or increase international trade with Iran, given economic realities and business wariness. Sanctions have significantly altered basic trade and consumption patterns that may be hard to change—and may limit or delay any benefits to Iran. Some companies and countries that have shifted away from Iran over the years are unlikely to rush back without solid assurances that sanctions relief is not just temporary. Uncertainty would make them hesitant to re-engage.
For example, one possibility in a diplomatic deal would be short-term suspension of sanctions–as an interim step—so the two sides have time for building confidence between each other and for winning political support at home for concessions. One of Iran’s top priorities is to get sanctions relief so that it can export more oil, which accounts for up to 80 percent of its export earnings. But the international oil industry may hesitate to reengage during a short-term suspension. Iranian crude also has specific characteristics that would require reconfiguration of refineries, an expensive step without prospects of an enduring deal.
All in all, the nature of multi-purpose and multi-layered sanctions has confused their strategic purpose, while constraining Washington’s ability to respond to positive actions with requisite nimbleness. Over time, as they has simultaneously grown and ossified, the sanctions have become a less-than-optimal tool to advance negotiations in a diplomatic process where a scalpel, rather than a chainsaw, is required.
Would the United States remove the diverse sanctions in the same way?
The timing and means of removing sanctions will almost certainly vary.
•  Politically sensitive sanctions--notably for Iran’s human rights violations and
support of militant groups--are unlikely to be on the menu in the near future.
•  Restrictions on oil and financial transactions are the crown jewels of the
sanctions regime in the eyes of Western policy makers. Neither Washington
nor its European Union partners are likely to suspend them without significant
Iranian guarantees about Tehran’s nuclear concessions.
But the reality of suspending sanctions is also not easy either. For instance, both the president and Congress would have to act to allowing Iran to reach its previous petroleum exports , including:
•  revoking Executive Order 13622,
•  using national security waiver to permit other states to buy more oil from Iran
under the National Defense Authorization Act of 2012,
•  permitting financial transactions with Iran’s energy, shipping and port sectors,
which are all declared “entities of proliferation concern” under the Iran
Freedom and Counter-proliferation Act of 2012,
•  waiving sanctions under TRA and IFCA to allow the provision of insurance and
reinsurance for shipping Iranian oil,
•  and waiving the ban on repatriating Iran’s oil revenue under TRA. Waivers need
to be renewed every 120 or 180 days.
Almost all Iranian major energy and shipping companies are also blacklisted by the Treasury Department, either as entities supporting terrorism (under Executive Order  13224) or for being involved in proliferation of Weapons of Mass Destruction under Executive Order  13382. Foreign companies will be more than reluctant to work with these companies unless they are delisted.
The only remaining option would be to suspend other sanctions that tangibly affect Iran’s economic well-being. The United States could allow Iran to import or export specific goods that produce revenue or help Iran’s manufacturing sector.  The P5+1 world major powers – the United States, Britain, China, France, Germany and Russia--chose a similar route in the February and April 2013 negotiations with Iran in Almaty, Kazakhstan. Their offer to relax sanctions on Iran’s petrochemical sales and gold trade was meaningful, but it was not proportionate to the concessions expected from Tehran.
Given the complexities, another U.S. option might be to focus on European sanctions, which are more elastic and lack clear criteria for termination. Their repeal requires a unanimous decision by all 28 member states of the European Union. Building consensus, however, is not always a straight forward enterprise in Europe. Also, there is now so much overlap between the U.S. and EU sanctions that a unilateral EU removal of sanctions might have little impact on the ground. One-sided EU concessions also risk being seen by Tehran as a tactical ploy to maintain U.S. sanctions in place indefinitely.
Diplomatic talks are expected to resume in the fall. The challenge for world’s six major powers will be devising a package of incentives, including some degree of sanctions relief that is achievable both politically and legally while also genuinely addressing Iranian concerns. The challenge for the new Iranian government will be to respond in kind.
Ali Vaez is the International Crisis Group’s senior Iran analyst.
Click here to see Vaez discuss sanctions at a July 22 event at the Woodrow Wilson Center for International Scholars.