Interview with Yasmin Alem
Yasmin Alem is an international development specialist. She is the author of Duality by Design: The Iranian Electoral System published by the International Foundation of Electoral Systems.
This is the fifth in a series on parliamentary elections due in March 2012:
The decline in clerical representation in parliament can be attributed to two main factors.
First, as revolutionary fervor dissipated in the late 1980s, the popularity of clerics, considered the main pillars of the Islamic revolution, began to waver. Despite Ayatollah Khomeini’s promise to keep the clergy from interfering in politics, they joined the political fray and thus lost their unimpeachable moral aura. While clerics assumed 50 and 55 percent of the seats in the first and second Majles (Iranian Parliament), respectively, today they represent merely 14 percent of the parliament’s membership.
Second, this de-clericalization trend is also a consequence of the political stratagem adapted by the political factions and coalitions formed during electoral campaigns. As a new generation of voters with few emotional ties to the revolution and its ideals emerged, electoral support for clerics ebbed away. As a corollary to this shift in voter behavior, political factions incorporated technocrats in their party lists to maximize their chances for electoral victory.
Changes in voter preferences also compelled many clerics to highlight their professional affiliations, instead of their religious pedigree, in their campaign advertisements. These efforts, however, were largely to no avail as clerical representation declined significantly after the third Majles elections. Since then, clerics have continued to lose their political terrain in the legislature to technocrats, war veterans and members of the Revolutionary Guards.
No. Clerics are still at the crux of all the three branches of government. The office of the supreme leader constantly trumps the prerogatives of the executive branch. The Guardian Council, which is a twelve-member body comprised of six clerics, dwarfs the parliament. The head of the judiciary an appointee of the supreme leader is selected from among the clergy.
The Assembly of Experts, responsible for supervising the conditions and comportment of the Leader, is an elite clerical body. Clerics retain control over other levers of power. By custom, the minister of intelligence is a cleric. Since its inception the Expediency Council’s chairmanship has been occupied by clerics. The current supreme leader, Ayatollah Khamenei, was the council’s first chairman. Ayatollah Hashemi Rafsanjani succeeded him and has served in this position since 1989.
Beyond their sphere of influence in political institutions, clerics have considerable representation in the Revolutionary Guards. Ali Saeedi is the representative of the supreme leader in the Revolutionary Guards. Hossein Taeb heads the intelligence bureau of the Revolutionary Guards and Mojtaba Zolnoor, until recently, served as the deputy representative of the leader in the Revolutionary Guards.
While the representatives from the conservative right faction dominate the current eighth Majles the reformist minority, holds 12 percent of the seats. Today, the role of the clerics in parliament from both factions can be described as negligible. There are only a few exceptions to this rule.
Among the “reformists” Godratollah Alikhani is one of the last influential clerics in the Majles and among conservatives Hamid Rasaei and Ruhollah Hosseinian are considered to be prominent members of parliament. More importantly, when it comes to the parliament’s leadership, the clerical establishment is no longer at the helm.
In fact, out of the parliament’s fourteen specialty committees only two are headed by clerics. This is a sharp shift from the 1980s and 1990s when the speakers of parliament and their deputies were voted in from the ranks of prominent and well-known clerics.
President Mahmoud Ahmadinejad and his allies have been accused of undermining the clergy. What is the president’s relationship with clerical politicians?
There is a deep rift between President Mahmoud Ahmadinejad and the ruling conservative clergy. Since April 2011, many of Ahmadinejad’s staunchest supporters including Ayatollahs Mohammad Taqi Mesbah-Yazdi, Ahmad Khatami and Ahmad Jannati have publicly criticized Ahmadinejad and his cohorts for advocating an “Iranian School” of Islam, defying the leader, and claiming to have a direct line of communication with the hidden Imam.
Having lost the unconditional support of Khamenei, the wave of attacks against the President’s inner circle commonly referred to as “ the deviant faction” has dominated headlines, and many of the his closest advisers have either been arrested or are under investigation by the judiciary.
Real electoral competition begins to shape during the last two weeks of the election campaign in Iran. So, it’s still premature to make concrete predictions about the outcome of the legislative race. However, in the run up to the March 2012 elections, two scenarios are possible: 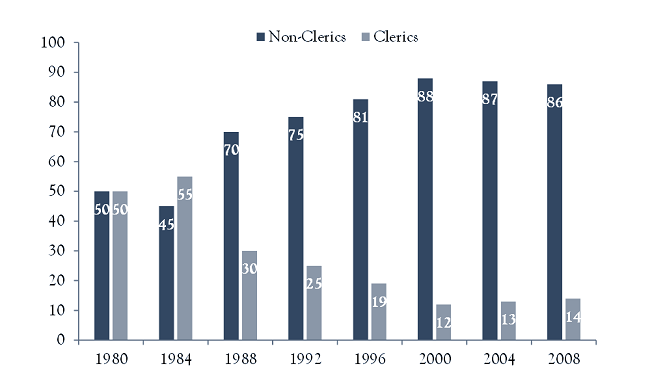 Source: Duality by Design: The Iranian Electoral System published by the International Foundation for Electoral Systems.
Read about "Iran's Conservatives: The Headstrong New Bloc"
Online news media are welcome to republish original blog postings from this website in full, with a citation and link back to The Iran Primer website (www.iranprimer.com) as the original source. Any edits must be authorized by the author. Permission to reprint excerpts from The Iran Primer book should be directed to permissions@usip.org